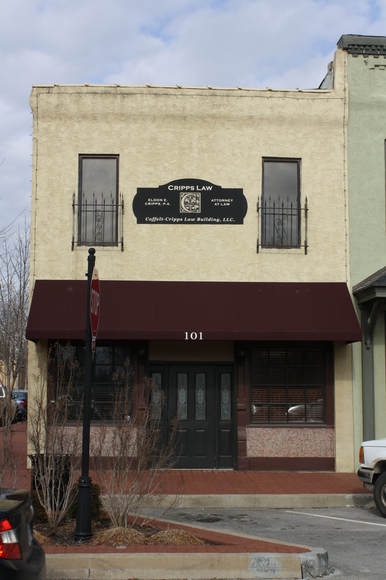 ​101 N.E. 2nd St -This building, built in 1880, was the only building spared by the fire in the winter of 1880 on the north side of the square. The building was originally made of red brick, but stucco was added to give it a modern look at some point. In the 1880s, this was R. J. Laughlin Dry Goods Store. Later, the St. Louis Dry Goods store was at this location, operated by the Meyer family. It was then the Racket Store, operated by the Wharton family, named so because of the tin pans and buckets always clanking. The store was later operated by Zenith Keck, also as the Racket Store.

In the early 1900s, Jefferson's Grocery was located here. The First State Bank was established at this location on September 10, 1909. It was one of the foremost banking institutions in Bentonville and showed steady growth and prosperity. Many of the officials of the bank were prominent citizens of Bentonville and watched the town grow from a mere village to a thriving community. The bank had capital stock of $25,000, which together with its surplus and undivided profits and resources, gave the institution the ability to handle transactions of great magnitude. The officers are as follows: J. G. McAndrew. president; J. D. Covey. Vice president; I.C. Casey, cashier. The directors of the bank  were D. W. Peel, J. D. Bryant, J. G. McAndrew, D. D. Covey and W. A. Dickson, who were upstanding men in the community.

During the depression, all the banks in Bentonville went broke.  For a brief time after the depression, this was the location of Fidelity Bank. In the mid to late 1930s, Herbert H. "Shorty" Bair rented the ground floor for his grocery from Eugene Coffelt, a local attorney who had purchased the building. Coffelt claimed that the aroma of the ground coffee would drift upstairs to his office, giving off " a very inviting aroma."

Mr. Coffelt, after Bair Grocery went out, rented to Jasper Little in the late 1940s and early 1950s. In 1951, 101-103 N.E. 2nd St. N. W. was Little's IGA.  As Little's grew, Jasper decided to build and relocate his store to the Midtown Shopping Center. M & J Variety Store, run by Myra and Jack Hayes, was established in this location. Myra was also a well known and respected piano teacher who operated out of her home on S. Main Street. Later, Eugene Coffelt, who still owned the building, moved his offices into the lower floors when the lease ran out on the variety store.

Today, Cripps Law Offices occupy this space. The building is referred to as the Coffelt-Cripps Law Building, LLC.
Interior of Little's IGA