​102 E Central St. - was built in about 1871 by James T. Craig whose family had operated a dry goods business in Bentonville as early as 1852. During the Civil War, the family moved to Cane Hill, returning to Bentonville in 1871. Mr. Craig then built the first two story business house in Bentonville. He again went into the dry goods along with a saddlery business next door and brought his sons into the business as well.

​During the 1893 Bentonville bank robbery. Mr. Taylor Stone shot from this location toward the robbers involved in the holdup. In the exchange of gunfire, Mr. Stone was shot through the hip. Over 100 shots were fired that day, some leaving their mark on this building.

Mr. James Craig was the operator the dry good goods business at this location when he turned it over to his son E. A. Craig in 1882. Two days after buying the building for $2,660, A. E. Craig turned around and sold the building to Maggie McDaniel for $3000. In 1903, it was sold to Ella May Higley for $3000. The Higley's Drug Store operated in this building in the early 1900's. It then became Brown's Drug Store, operated by Martin Brown. Inside the Brown Drug Store, space was leased to "Hall the Jeweler". Later, Jack Lukens took over the drug store naming.

In 1915 the building was sold to W. E. Ammons for the price of $8000.  It is believed he probably ran a grocery store called Atkinson & Ammons at this location. After that, the ownership of the building changed hands several times. In 1919 the building was bought by Vannie Oglesby, and in 1922 by W. E. Jackson and E. C. Pickens. The building was later owned by Erie M. Gregg who sold it to B.T. Burks in 1932.

From 1947 to 1962, the Western Auto Associate Store occupied this location. At one time, both Vol Lindsey and Jeff Rice had law offices in the upstairs of the building.

In 1952, Clayton and Sue Little purchased the property and later moved the law offices of Little, Lawrence, McCollum and Mixon to this building.

In recent years, there was a cupcake shop, NewRoad Ventures, and is presently the home of Downtown Bentonville, Inc. 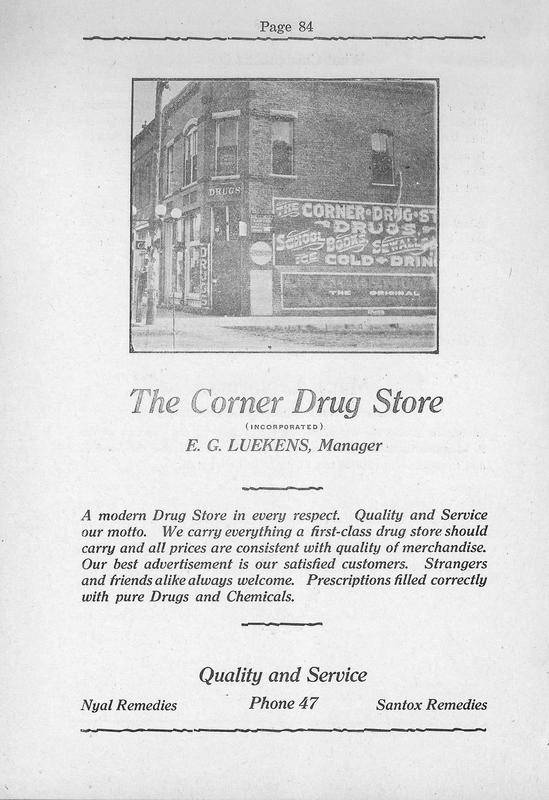 This advertisement is from the 1919 Bentonville City Directory