Established in 1910 and operated until 1919, this was William's Star Restaurant, owned by Mr. W. L. Williams. In its time it was one of the most popular cafes in the city where one could order all kinds of game, fish, oysters, etc. in season. This cafe was famous for its excellent cuisine, prompt service, and reasonable prices. They also had with the cafe a confectionery department and here you could get any drink, whether hot or cold, that was known to the public, They made a specialty of fine candies, which were kept fresh, and of which they had a most complete line. Mr. W. L. Williams, the proprietor, was from Paris, Texas, and was a public-spirited businessman who was willing at all times to do anything in his power to help out towards the advancement of the city.

About 1919, Kit Campbell moved his barber shop from the Peoples Bank building (later the Bank of Bentonville) to this location. During this time Mr. A. J. Bates gave Mr. Campbell a collection of mounted deer and elk horns to display in the shop. Because of this, the name was at some point changed to the Elk Horn Barber Shop. Mr. Campbell operated here until 1942 when he retired after work in the business for 55 years. In 1942, Harley Fields took over management of the shop, then purchased the shop from Mr. Campbell in 1953. Harley Fields continued to run the shop until 1965. The inside of the building was was like a museum. It had 170 shaving mugs that served as a veritable who's who of Bentonville's past. There were old photos on the wall of Bentonville back in the 1890's as well as advertising mirrors from between 1910 to 1920.

After Harley Fields retired, the business was purchased in 1965 by Charlie Turner.

​Today it is the Bentonville Convention & Visitor Bureau. 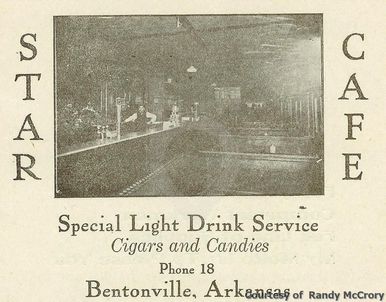 These are early images of the Elk Horn Barber Shop. At one time there was a beauty salon in the back of the barber shop.
​In the Elk Horn barber shop were about a dozen deer and elk heads on the wall, along with 20 sets of other horns. One set of horns was more than six feet wide and another set even hung outside above the front door. There were also assorted stuffed animals that were located around the shop and snake skins attached to the walls. Most of the animals on the wall were given to the shop by Jack Bates, a local banker after whom Bates Hospital was named.  Also on display were Civil War swords and photos of Bentonville from the 1870's & 1880's.  In this photo you can see advertising mirrors in the background. The mirrors were made sometime between 1910 and 1920. There was a lot to look at while waiting to get your hair cut. Going to the barber shop at the Elk Horn was like visiting a museum. 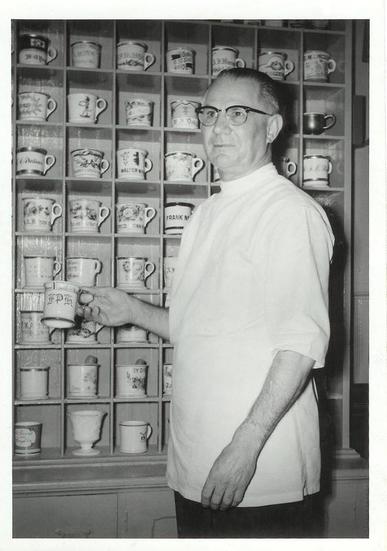 Mr. Harley Fields holds one of the mugs from his own personal collection. He added to his collection whenever he found a mug for sale. The barber shop was originally owned By Kit Campbell, then it was sold to Harley Fields.
​The last owner of the shop was Charlie Turner.