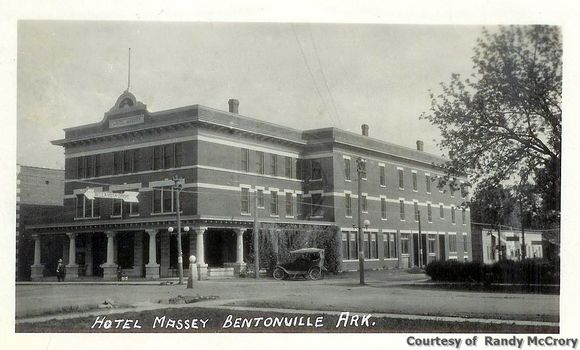 The Massey Hotel at 123 W. Central, was built on the property that was previously the site of the "Eagle Hotel" which dated back to 1840.
Construction of the Massey, a Colonial Revival style structure designed by architect A. O. Clark for Robert D. Massey, began in 1909.  However, Mr. Massey was killed November 7, 1909, in a runaway horse accident about 7 months before the motel was completed. The hotel was later purchased by C. R. Craig.

The Massey's formal opening was on June 28, 1910, and included a reception of 240 guests with music provided by Leister's Orchestra. Tickets were a reasonable $1.50, and the event lasted well into the night.

When finished, the hotel included 25,500 square feet of space at a cost of $40,000.The upper floors of the building housed 40 guests, with hot and cold running water, electricity, and steam heat. Many of the rooms had their own private bathrooms. The building was constructed with a combination of brick, cast stone, and rough cut limestone. In 1914 through 1916, it served as the ticket office for the interurban train line. In 1922, Oklahoma Territorial Governor William Renfrow passed away in the lobby of the hotel.

The lower floor has served as space for many businesses over the years.  In 1939, in this building housed the Hotel Massey Coffee Shop and Western Telegraph Company.  The coffee shop, managed by Henry Summer, had an ad that stated, "Your Choice--Where Friends Meet--Best Food--Best Price". In the 1940's, the W. H. Roberts Public Accounting and Tax Service and Miss Sue Craig & Associates Public Accounting Tax Service occupied space this building. In 1951, offices here included Bishop Taylor Accounting, O. E Brown & Son Real Estate, then in 1956, Bishop Accounting and Ozark Realty. In 1958, the hotel was put up for sale but apparently had no buyers come forward. A busload of African Americans came into town saying they were looking to buy the Massey as a black retirement home. Within two days there was a meeting of 200 citizens who raised enough money to purchase the Massey for $45,000. In 1961, the Burger family purchased the Massey and changed the name to the "The Town House".  Over the years, the Massey building has also housed a KAMO Radio Station, a bus station, a barber shop, and a gift shop. The space where the Massey Hotel was located was continually occupied by a hotel from 1840 to 1975.

The first floor of the building is now the home of Phat Bike Shop, while the upper floors house the Walton Family Foundation.