126 W. Central
​
Plaza Theater/Meteor Guitar Gallery
During the early 1900s, this location housed the Atkinson & Co wholesale grocery. Originally called the Meteor Theater, it was designed and constructed by Mr. Harry Kelley at a cost of about $30,000. Mr. Kelley believed theater goers loved good music, so one of his heaviest expenses was the Barton Silver-Toned pipe organ, which was erected at a cost of $6,000 and was built especially for the Meteor Theater and was the same make as the one in the Palace Theatre in Fayetteville, Arkansas.

The grand opening of the Meteor Theater was August 1, 1927, with over 1,200 people attending. “Venus of Venice”, a strong First National picture at the time, was shown at the grand opening. D. M. Greer, president of the Rotary Club, made the welcoming address, and Miss Gladys Cosnel of Fayetteville played several selections on the pipe organ. The Meteor Theater introduced “talkies” on December 20, 1929. It was renamed Plaza Theater by 1940.

The pipe organ has been refurbished and is now at the Presbyterian church in Bentonville. The theater was owned by W. F. Sonneman of Fayetteville until May 1946. At that time Charles B. Craig took ownership of the Plaza. He had owned the corner filling station before this but had also managed the Plaza for the previous 15 years under Mr. Sonneman's ownership. Mr Lowrey later ran the Plaza followed by J. T. Hitt. At one time J. T Hitt  owned all three movie theaters in town.  There used to be shops on either side of the entrance of the theater. Some of the businesses located in these side shops were: Rabbit's Shoe Parlor,  C. R. Craig Insurance, Radio Shop, and Pud Fields Cafe, and Plaza Grill.

In 2014, the building was restored and renovated, and reopened as a music and art venue, Today the old theater is called Meteor Guitar Gallery and is also used as an event venue. 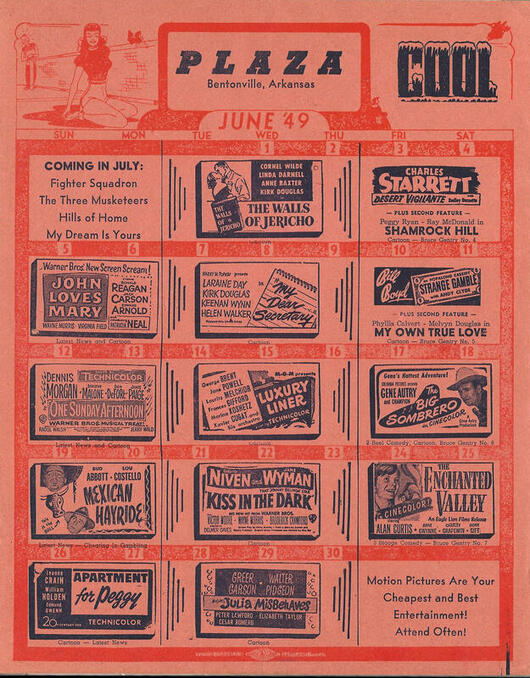