City of Bentonville
Located in Osage township, about three miles north of the geographical center of the county, upon the Grove branch of the Frisco railroad, is the prosperous and growing city of Bentonville, the county seat of Benton county, with a population of about 2,500. The town has had an honorable and interesting career, extending over a period of sixty-six years. Founded in 1837, its growth was slow, although it was the business center for a large surrounding territory. It has had a steady and substantial  growth, until it is now one of the leading cities of northwest Arkansas. It is a solid, wealthy and cultured community, surrounded by a country that is full of marvelous natural resources.

​The immediate site of the city of Bentonville is gently rolling, being located on the northern edge of the great plateau or tableland that occupies the central part of Benton county. Beginning at the northern limits of the city and extending northward for some distance into Missouri, are the gorges, valleys and rocky ridges that form the mountainous country along Little Sugar creek, that stream approaching to within three mile of town. The official gauge of the United States Geological Survey, located on the front of the county office building just north of the public square in Bentonville, shows the elevation above sea level to be 1,303 feet. This gauge is about three feet above the sidewalk. Eight miles north, in the valley of Little Sugar creek, another government gauge gives the altitude as 995 feet, a descent of 308 feet. To the eastward, southward and westward from the city the country extends for many miles in gentle undulations, closely resembling a prairie, and furnishing excellent fruit and farming land.

The streets of Bentonville were laid out to confirm to the cardinal points of the compass, and run at right angles to each other. They are fairly well graded and drained, and those around the square and leading to the depot are macadamized. The thoroughfares of the business section are cubed and have broad brick, stone of granitoid walks along their sides. The sidewalks throughout the residence section, however, are in wretched condition. Whose fault this is, the writer was unable to learn, but the fact still remains that the greater share of the walks in the residence portion of the town badly need repairing with entirely new ones. 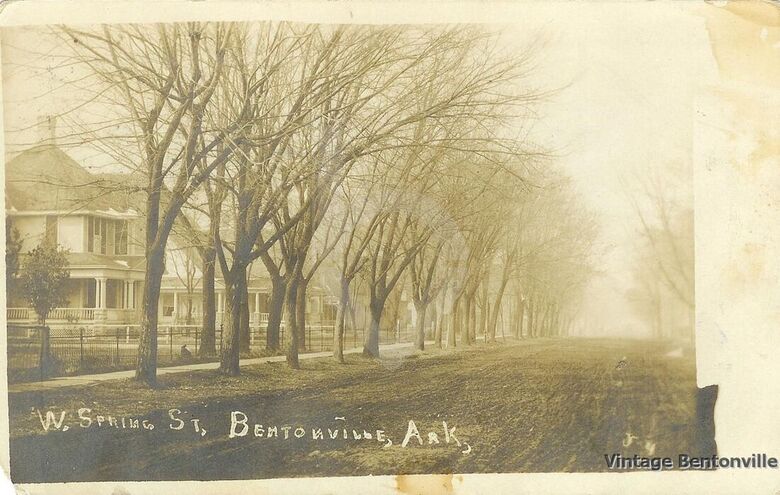 An early view of Spring St. now known as Central Ave.
In common with a large number of county seats through the southwest, Bentonville has its public square, which is the nucleus around which its business houses have been built. This square is located near the center of the city and lies between the following streets. Court on the north; Talliaferro avenue on the east; Spring or Church street to the southward, and Main on the west. One block north of the square and laid out east and west is Greenwood avenue, a block west, extending clear through the city from north to south is Smartt avenue. The public square itself is a grassy park shaded with maples, elms, and other trees. It is an octagon in shape, enclosed with an iron fence, and in its center is a band stand.

Diagonally across from the northwest corner of the public square is the county court house, a handsome three-story building of brick and stone, completed in 1874 at a cost of nearly $60,000. It is roofed with metal, and from its summit rises a symmetrical cupola, which, with other embellishments, give a most pleasing effect. It has two fronts, one facing south and the other east, and the interior court house, where it was erected, contains the circuit and county court rooms, sheriff's office, jury rooms, wide halls and stairways, and several offices that are rented to individuals. The surrounding grounds are neatly kept and are enclosed with an iron fence of tasteful design. From the cupola of the court house, a magnificent view of the country around Bentonville for many miles can be had. The city of Rogers is in plain sight, and on a clear day the higher peaks of the Ozark and Boston mountains are distinguishable, forming a majestic chain of blue heights that sweep the northeastern, eastern and southeastern horizon until they are lost to view in the dim and hazy distance of the south. 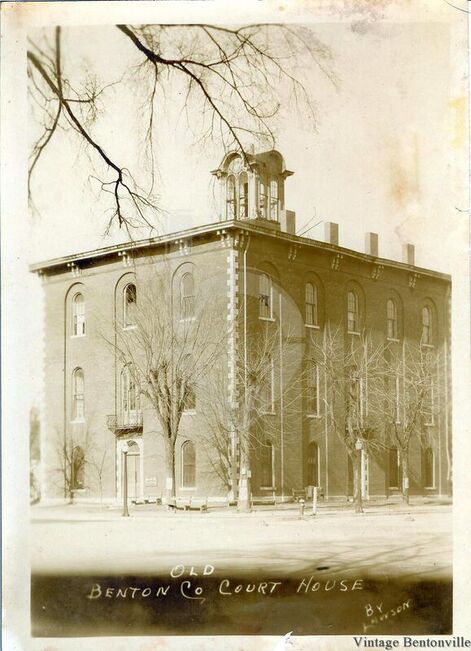 An image of the Benton County courthouse that was built in 1874. It was used until the new courthouse was built in 1928. The building shown was razed a few years later.
The county jail, a massive structure of stone, brick and steel... it was erected in 1889 at a cost of about $7,500. Just east of the jail and fronting east on Main street is a substantial building of brick and stone containing three offices, each of which is provided with a fire-proof vault. These offices are occupied by the county clerk, circuit clerk and recorder, and the county treasurer. 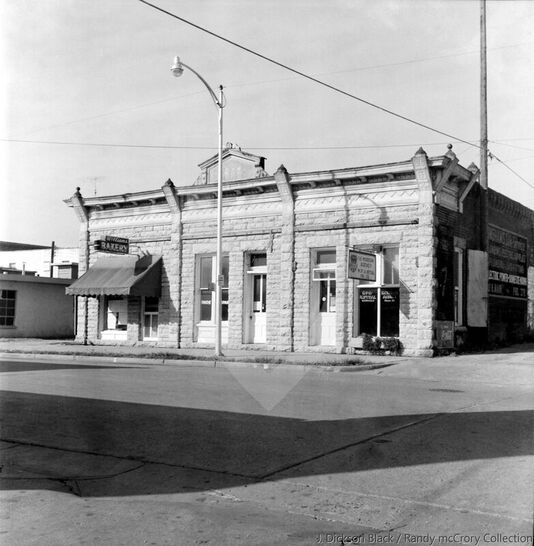 This building housed the Benton County offices back in the early 1900s.
Images from 1914 of the interior of the Benton County office building
The business part of Bentonville is built up solidly on the northern, western and southern sides of the public square, and extends a half block west on Court and Spring streets and the same distance north and south on Main street. It consists largely of brick buildings, many of which would do credit to a town of much larger size. The track of the Frisco branch railroad passes through the city from east to west, four blocks south of the square; its depot, a neat brick edifice, is situated on the west side of south Main street.

At the northwestern edge of Bentonville is a series of fine springs gushing from ledges of rock near the head of a mountain gorge. These springs, together with a heavily timbered natural park of nearly four acres, are owned by the city. Considerable improvements have been made, including a foot bridge across the gorge, graded driveways along the hillside, a speakers' stand and an auditorium. This resort, known as Park Springs, is a most pleasant place to visit. The Crystal spring is another fine outflow in a beautiful little valley just northeast of the city. Farther up the latter depression, near its head and about three blocks east of the public square, a splendid spring comes to the surface directly beneath the office of the Eagle flouring mills.

Bentonville owns its water system which was built in 1896 at a cost of $27,000. The source of supply is a splendid spring with a normal flow of 40,00 gallons per hour, located three miles northeast of the city in the hills of Little Sugar creek. At the spring is a substantial stone pump house, containing a Worthington Duplex pump having a capacity of 20,000 gallons per hour. A six-inch main carries the water to the distributing tower. This is situated a half mile east of town, where it consists of a truss tower of steel, surmounted by a cypress tank holding 55,000 gallons, the structure having a total height of 116 feet. The water is brought from the tower to the city through an eight inch main, and then passes into an intricate system of six, four and two inch pipes, supplying  sixty-two 2 1/2 inch double fire plug hydrants. Jim Dunn is superintendent and William Grimes is engineer of the water works, and both are men fully qualified for their positions. For further protection against fire, Bentonville has a well-equipped volunteer fire company. The fire fighting apparatus, consisting of hook and ladder truck, hose reel, one thousand feet of 2 1/2 inch hose, and other supplies, is housed in the lower story of the city hall building, a half block east of the public square. The fire bell is mounted on a steel tower which stands in the public park near its eastern side.

Bentonville also owns and operates its electric light plant, which was installed in September, 1902 at a total cost of $10,000. The power is furnished by the large Corliss engine at the Eagle Mills and the dynamos are located at the same place. The equipment consists of a Westinghouse alternating 2,500 light machine and ninety incandescent street lamps of fifty candle power each, are in operation, nearly every street crossing in the city being lighted. There are four arc lights about the public square, and about 1,000 incandescent lamps in service in stores and dwellings. The city runs wire the wires clear to the buildings, and wires the houses at the exact cost of material and labor. James Dunn is the electrician.

The city owns a substantial 25 by 60 foot two story brick town hall, located a half block east of the square. The upper story is used as the office of the superintendent of the electric lights and water works, while the lower part contains the apparatus of the fire department and the city jail.