Like A  Bolt Out Of The Blue, 1947 Tornado Hit Brightwater - Garfield Area
By Mrs. Jim Mahurin
Pea Ridge Graphic - April 16, 1970 (Now the Northwest Arkansas Democrat Gazette)
The evening of Tuesday, April 29, 1947 in this area started out like any other warm spring evening. Chores were finished and people were settling down after dinner. A spring thunderstorm was brewing in the southwest but not too much thought was given to it. There had been thunderstorms before.

It was approximately 8 p.m. when a black funnel of death and destruction dropped down out of a rain-drenched sky to bring disaster to Northeastern Benton County, leaving nine dead, more than 50 injured and a countless number with heartbreaking memories.

The tornado first touched down just west of Avoca where it uprooted several large trees. It then leaped about two miles, dropping into Brightwater about 8 p.m. leveling the town, and continued eastward toward Garfield.

After ravaging the eastern community of Garfield, the storm appeared to have blown itself out just before reaching the White River Bridge on Hwy. 62 west of Eureka Springs.

When the twister ripped and tore its way through Brightwater it wiped out landmarks around which community life had centered for many years. The church, the school, the masonic lodge hall, the only store and most of the homes. Brightwater had ceased to exist, never to be rebuilt again like it once had been. Only three homes in the entire town were habitable, but they too, had received damage by the ravages of the storm.

Help arrived almost at once to this part of the disaster area. In the inky darkness rescue workers began the search for the dead and injured. Search lights from the police cars and ambulances were kept in constant motion, searching the hills and creek banks. Ambulance drivers had placed stretchers on the ground, waiting for victims  from the death funnel to be placed on them. Men waded waist deep in the rain swollen Sugar Creek in search of bodies. The water was filled with floating boards and what had been furniture. There was little confusion. The stillness was terrifying. A train had stopped and at intervals the whistle sounded, giving a tone of loneliness and despair to the valley. People milled around but there was no crying or hysteria, everyone spoke in hushed tones.

Ambulances from Rogers, Springdale, Bentonville and Fayetteville were summoned to the area, and all local doctors as well as doctors from Seligman, Mo. were called to the scene to treat the injured.

Searching was continued until all missing persons were accounted for. The dead and injured at Brightwater according to an April 30, 1947 copy of the Rogers Daily News read as follows: Mr. and Mrs. Arch Blansett and Orville Springer were killed instantly by the storm.
P. J. Blansett, eight-year old grandson of Mr. and Mrs. Arch Blansett, was blown nearly 300 yards in his grandmother's arms. The youth died the day following the storm at a Rogers hospital. The dead Mrs. Blansett still grasped her grandson in her arms when the child's cries attracted rescuers to them.

The injured admitted to the hospital for treatment from Brightwater were: Mrs. Orville Springer and Bertha Austin. The body of Orville Springer was found in the wreckage of his home. Although Mrs. Blansett and her grandson were found rescue workers searched for more than an hour before they found Mr. Blansett's body. When they did find him, his body was only about 35 yards from that of his wife.

Numerous other persons were injured, but not badly enough to be hospitalized. These were treated at the scene of the storm.

Several Brightwater families miraculously escaped injury or death when their homes were picked up by the storm and scattered by the wind. Among them were the Clint Clawson family who remained with the wreckage while the wind pushed the tangled walls and furniture about 20 feet, all of them escaped injury.

​Help was slower in coming to the Garfield area, due to the fact that all telephone communication had been cut off by the storm. Rescue workers had completed their work at Brightwater when the call came for aid from Garfield. No one realized the tornado had continued its path for such a great distance.

The storm swept about two miles east of the little town of Garfield, hitting a heavily populated farming community and taking everything in its path. Approximately 30 homes and barns were destroyed in the Garfield area. Several families escaped unhurt or with minor injuries when their homes were completely or partly destroyed.

Persons killed instantly by the storm in Garfield were Mrs. John L. Hays, Joe Williamson and Albert Cline. Mrs. Joe Willamson died within an hour after being admitted to the hospital. Jimmy Morrison, six-year old son of Mr. and Mrs. Cleo Morrison, died the day following the storm at the Rogers hospital.

Before the rescue workers and ambulances could get into the disaster area at Garfield, trees had to be chopped out of the roads. Some were so large, new roads had to be made around them. The roads in the area became slick due to the heavy downpour of rain and the steady stream of cars and ambulances, making it more difficult for the dead and injuried to be removed from the disaster area.

Several persons from Garfield aided in directing ambulances to the scene. In some instances, when they reached the disaster area they found some of dead to be their relatives. But like the scene in Brightwater, there was no confusion or hysteria. Everyone did what had to be done.

The search was finally over, all persons that lived in that community had been found, some dead, some injured seriously, others just bruised and with minor cuts and scrapes. Neighbors threw open their homes to the surviviors, offering them shelter until other arrangements could be made.

​By the time all had been found and everything had been done that could be done that fateful night, around midnight the skies cleared,  the stars shone like brillant diamonds, just as if Mother Nature was trying to apologize for what she had allowed to happen. 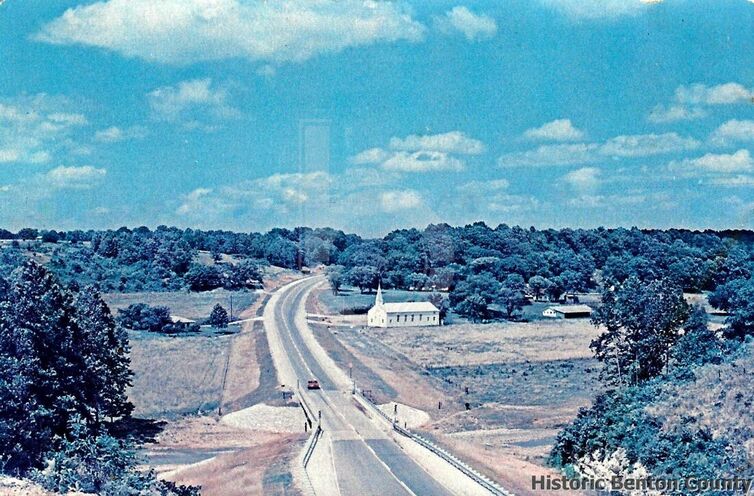 This placid scene shows the valley up which the 1947 tornado streaked to destroy the town of Brightwater. The church seen here, now known as the Brightwater Memorial Methodist Church, was built as a memorial to those killed in the storm. Donations given by sightseers after the storm furnished the basesfor the funds needed.
​
The Rogers battery of the Arkansas National Guard was called on duty at midnight, and the Bentonville Guard Battery was called upon to patrol the disaster areas to prevent looting. They stayed on duty the remaining of the night and all through the following day. Only relatives of the dead or injured were allowed in the area Wednesday, the day after the storm to recover what remained from the storm or to take care of what animals that were left.

​Of course there were some who came into the area to sightsee, and some who just couldn't resist taking things that belonged to the unfortunate victims of the storm. But not much was left of most homes places, just masses of torn twisted pieces of what had been houses. Pieces of cloth and strips of tin hung from remaining trees in weird shapes. Cars were smashed to look like balls of metal pounded together. Animals lay dead, chickens were strown everywhere, some with their feathers blown off.

In the light of a new day, with the sun shining brightly it was hard to believe such a thing could have happened, but it had, and all you had to do to be reminded was look around.

Several unbelieveable incidents happened during the storm; some I know to be true because I saw the affects of them, others I heard about but didn't see. At Brightwater, a cow lay dead with a board blown through her body. In the Garfield area today stands a tree with a cap from a wood burning cook stove imbedded in its trunk. Of course, the tree has grown, but you can still see part of the cap. A chicken was found wedged between an automobile tire and tube, still on the rim and full of air. At one home site, all that was left of the house was the floor, everything had been swept away, but on the floor were the rugs, as if they had just been laid.

One story was told of a pair of mules that had been tied to the manger in a barn when the storm struck. It blew the barn away and mules with it. When the mules were found, they were still tied to a piece of the manger and were unharmed.

There were many stories told of what happened that terrible night, some folks just couldn't believe some of the stories that were told.

In the days that followed the storm, many heart-breaking tasks had to be fulfilled. The first, of course, were the arrangements for funerals for those who were killed by the tornado. To these funerals came friends and neighbors and loved ones, some on crutches, some bandaged, some so black and blue from bruises it looked as if they had had the worse beating of their lives, and in a sense they had. They came to pay their last respects to those who didn't survive the storm, as they had been fortunate enough to do.

Another job that had to be done was find new homes and for some the homes that had been destroyed had been their home for many years. How heart-breaking it must have been to return to their home places and find nothing but torn twisted debris. Some searched endlessly for items of sentimental value, but their search was fruitless.

The Red Cross disaster relief section went into action the day after the storm. A shipment of tents and blankets was sent to the Garfield and Brightwater areas to provide temporary shelter for those who lost their homes in the storm. R. E. Patterson, Fort Smith housing expediter for the area, informed Rogers Mayor Robert Vogt, that arrangements had been made for the release of whatever lumber and building material needed to rehabilitate the section. Some of the homes that are in the area today were built with the help of the Red Cross. Others were built back by the owners themselves. Some never rebuilt.

One of the most heart-warming stories I heard while doing the research on the '47 tornado is the story of faith and courage of the members of the Brightwater Methodist Church. The church was completely destroyed by the storm. All that was left were the concrete steps. The Sunday following the storm, the church members gathered together where their beloved church once had stood. They sat on the church steps and fallen trees and had their Sunday Worship service.

After services, one of the members suggested passing the collection plate among the sightseers (and there were many) to start a building fund for a new church. This was done for two Sundays and according to one member of the church, they collected over $800.00. So it was that the church was rebuilt as a memorial to the members who had lost their lives in the tornado.