The Macon & Carson's Brandy Distillery was built by E. John Macon in 1893. His brother, Robert Macon, would later join his brother at the distillery and become part owner in the business. He later became full owner and operator of the business. What was primarily produced at the distillery was Apple Jack Brandy. The plant had 30 fermenters that could produce 215,00 gallons of apple brandy a year for n average of about 600 gallons a day. In a season they would go through one quarter of a million bushels of apples.

A story has been told of a traveller from Staunton, Virginia, who passed through Benton County in about 1900. His impression of the distillery was passed along to his home newspaper and included the following description: "The string of apple wagons waiting their turn in the apple season is a great curiosity. It beats the wheat wagons at the White Star Mills in Staunton. They have to wait for two days and camp out on the road while standing in line overnight, but not a pint of the brandy can be bought in town. It is dry."

Another story was told of a farmer who had worked in his peach orchards from early in the morning to be able to bring a full load to the distillery. When he arrived, they had already taken in as much as they could accept for the day and turned him away. Try as he might, they still refused to take his load. As he left and had gotten past the stores in town, he got to thinking that the peaches were too ripe for any good purpose, so he took the tailgate off the wagon and gave his mules a hard hit so they would take off fast, dumping the peaches all over the ground. Soon another farmer came along who was herding in his milk cows for the evening. The cows found the peaches and had quite a feast. Sadly, four of the cows died that night. The dairy farmer sued the other man for the price of the four cows. Not only did the farmer who spent all day picking peaches not get anything for his day of hard work, but he also had to pay for the cows.

Macon & Carson's was the largest apple brandy distillery west of the Mississippi. They only bought the cheapest grade of apples, paying 10 cents a bushel, and also bought peels and cores from the evaporators to make their brandy.  They kept a guard posted to keep men and boys from boring into the fermenter to get a drink of that potent brew. The brandy was no longer produced when Arkansas passed prohibition laws in 1914.

The plant was then sold to O. L. Gregory Vinegar Company who used the plant for producing apple cider. The floor of the distillery was found about a foot under ground recently. The foundations of what held the brandy fermenters can still be seen. 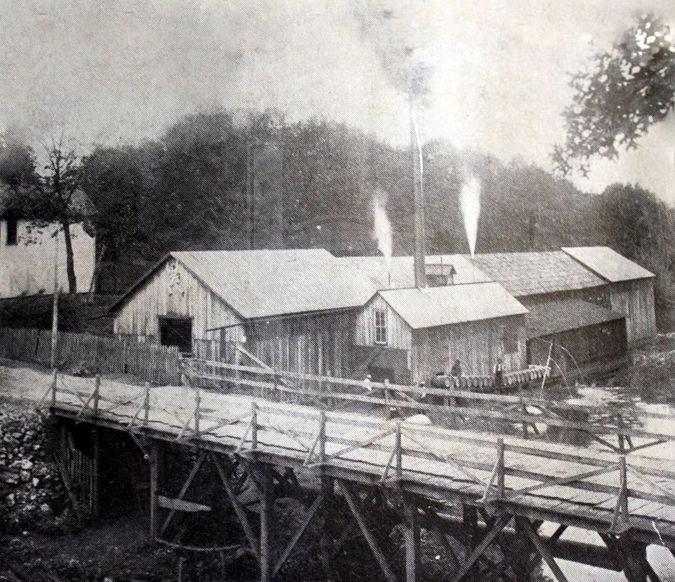 The remains of the brandy distillery can still be seen today almost after 100 years after it closed.