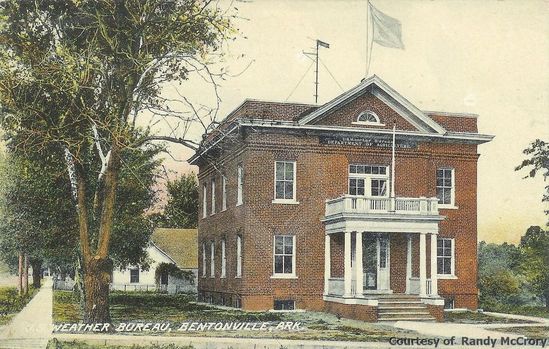 In the early 1900’s, the Benton County Horticultural Society, along with then U. S. Senator James Berry, made efforts to secure a weather Bureau. Because of the large agricultural area and expanding apple orchards they believed that Bentonville was in bad need a bureau. In the spring of 1905, a bill was introduced proposing the building of a weather bureau in Bentonville and was signed into law. In June 1905, bids were accepted for the building of the bureau. Bentonville was the smallest town at this time to receive a First Class Weather Bureau.

The building was built on the northeast corner of the square. This is where the city's post office once was, and where the Circuit Court Annex building is now. It was a two story brick building with a full basement. There were several rooms used by the Department of Agriculture to examine fruit produced. It had rooms for weather equipment, offices, and living quarters for the observers.

Once the building was completed in the spring of 1906, an inspector was sent from Washington D. C. to inspect the building. Here is an excerpt from that report. “I arrived in Bentonville at 8:15 a.m., March 6, thoroughly inspected the building, and left there at 4:00, arriving in Washington at 3:30 p.m. March 8. I found that the building had been generally well constructed, and that the contractor had followed the specifications and instructions with a few unimportant exceptions… I believe that the weather bureau has received better value for the money paid than in any building that we have constructed for a long time. In fact, I am confident that it would be impossible to erect a similar building in most sections of the U.S. for considerably more than the cost of this one… I found that in several instances the contractor had exceeded the specifications, and had made improvements in certain parts of the work without expense to the government. Mr. Orin Park, assistant observer, assigned to duty in charge of the Bentonville station, had arrived in Bentonville several days in advance of me. He seem pleased with the assignment , but stated he was uncertain whether or not he would be able to remain in Bentonville on account of certain business matters pending in connection with some of his patents… I talked to the President of the Horticulture Society of the county and he expressed the opinion that the Bentonville station would prove to decided value to the fruit growing interests. The phone system extends into nearly all the large orchards, and as I gave Mr. Park instructions to put in the telephone immediately it is quite likely that the office will be called on for weather information at once as the critical frost season approaching.”

As a first class weather bureau, it was responsible for putting out weather forecasts each day. Farmers could call the bureau at any time to get weather updates. The weather forecast would also be given to the local newspaper to be published. Cards were also placed in local businesses telling the forecast for the day. If you were interested, a special service provided was a daily card in the mail giving the day’s weather forecast. It would also identify when farmers needed to spray their crops. Captain Orin Park was the first observer to be given the post at the Bureau. Before coming to Bentonville he had served in weather bureaus in ten different towns all over the U.S. He served from the time it was opened until August 20, 1920. When he retired his wife Mrs. Julie Park was appointed in his place. Shortly after her appointment they began to reduce the work of the Bentonville bureau, at which time it became what was known as a cooperative bureau. They would send their information to a central location which would send back the weather forecast for the day. Mr. Park still served as her assistant until she retired in January 1928. He served as weather observer for 63 years never missing a day of work. He died about a year after the end of his service.

After the Parks retired, Mrs. J. T. (Pauline) Gibson took over the position of observer. In 1934, the building was sold to make room for a new post office, and that beautiful building was torn down. Space was provided in the Benton County Courthouse for the weather bureau when the  post office was built. In 1942, all equipment was taken by the army, bringing an end to the weather bureau in Bentonville. By this time, Northwest Arkansas wasn’t the agricultural center it had been in the past.