As a young man, Harry Elliott had gone out west to the silver fields in Silver City, New Mexico, in the 1870s. While there he practiced law. He also purchased a large share of a silver mine that ended up hitting a silver vein. While visiting his aging parents in Bentonville in 1887, he decided to sell his shares in the mine and take care of his parents. His share of the mine was estimated to be worth a half a million dollars at that time. Upon his return to Bentonville, he worked as an attorney.

The abstract says that Mr. Elliott paid $3,000 for the property. Since money was not an object, he commissioned a three-story, 13 room mansion. This house was built for his parents and younger sister. The work on the house began in the fall of 1887 and was completed sometime in 1888. The house was built in in the Italianate Victorian style. Exterior features at the time the home was built included a widow's walk, seven outdoor porches, large bay windows, and a carriage porch on the east side. The exterior brick walls are 16 inches thick, and the interior walls are all brick as well. The interior included eight fireplaces, walnut detailing in the stairway and interior shutters, maple and walnut flooring, and a wine cellar. The property was spacious enough to accommodate servants' quarters at the back of the property, including a place for a live-in maid on the premises. Harry Elliott never lived in the main house but lived in a smaller house on back side of the property. He did, however, take all his meals in the larger house.
​
When Mr. Elliott's mother and father passed away, the home remained in the possession of their daughter, Adeline Elliott. She married James Wood, who moved into the house with her.

Harry Elliott passed away in 1926, leaving his brother and two sisters to figure out the details. He had always owned the property and left the house to his sister Adeline who was by then known as "Granny Wood", and who had nearly always lived in the house. The other sister contested the will, and a settlement was made where it was rumored that each inheritor would receive $160,000. In the end,  Granny Wood got to keep the home she had lived in for so many years. She is remembered as one of the last elegant victorian ladies in Bentonville. She played classical music on the piano and gave piano lessons to children at no charge. Mrs. Wood was also said to have had one of the finest collections of stamps in the United States, even selling stamps to President "Teddy" Roosevelt, who was also a stamp collector. Her son and his family at some point moved in, living on the second floor of the house while Granny Wood occupied the first floor.

Her son tried his hand at business but failed. When Granny Wood died in March of 1950, the money was all gone. Everything had to be sold, including the mansion. The house's new owner was Rudolph Buell, who was a hardware merchant.

By this time, the house had fallen into disrepair. A crew was hired to fix up the old house, which took about nine months. The old wallpaper was steamed off, floors refinished, a new steam heat system added, and new wiring installed, but no structural changes were made to the house. For the next 16 years, Mr. Buell took good care of the house. In 1966, the house was sold to Mr. Kelly who later sold it to the Wheeler family in 1976. The house has been owned by several other families since then. 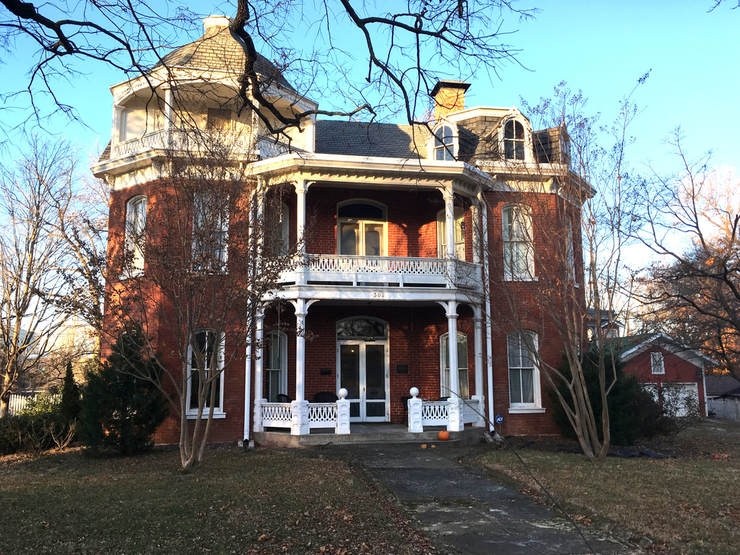