Kraft Builds Modern Plant in Bentonville in Bentonville During 1947
Article from January 30, 1950 The Benton County Democrat, now NWA Democrat Gazette
(with more recent information added to the end of the story)
When several thousand persons gathered in Bentonville, October 11, 1947, to attend dedication services for the new plant of the Kraft Co., it meant among other things, the products of the farms and dairies of Benton county were to be processed near the center of production. This meant three things, industry was coming to Benton county; products of Benton county farms would be processed on the spot and third, labor from Benton county communities would be used to process items produced right at home.

A new era had come to the county, no longer were the products of the farm going several hundred miles to be turned into products for home use.

It has been a far cry from the first day when Amos Robinson of Lowell, dumped the first three cans of milk at the receiving plant until today when thousands of gallons of milk from Benton county plants have passed through the automatic conveyors and machinery to become the finished product.

When James L. Kraft, founder of the company and chairman of the board of the Kraft Co., made the dedication talk at Bentonville his remarks ran along this line, "Your feet are on the ground. Build up bigger farms, large dairy herds, save your money and you won't have to call on Uncle Sam in your old age."

Then going on Mr. Kraft added, " I built a plant here because I fell in love with the community and everyone I met here."

​The construction of the Kraft plant was the work of civic leaders over a period of time, realizing that the products of the dairies in Benton county should be processed on the spot. 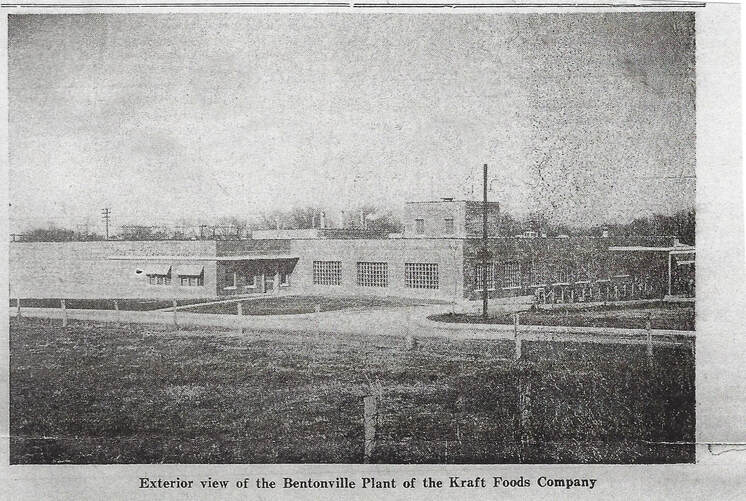 Let us follow the operation of this modern plant from the time the can is set on an automatic conveyor and carried inside where it is weighed, tested and pumped into a 96,000-gallon tank, then strained, pasteurized and carried on into the vats, five with a capacity of 18,000 gallons each. Moved about in the vats four and one-half hours, the product is milled, slated and placed in 10-pound bricks to be stored for 90 days before being wrapped and shipped out. The byproduct is converted into a stock feed, which is ground and prepared at the plant. The cheese produced in this modern plant is shipped to Springfield, where it is packaged according to needs of the trade. Murlin Cawood is superintendent of operations at the plant.

When the milk intake of the Kraft Foods Company's cheese manufacturing plant in Bentonville opened in the early summer of 1947, officials of the company said: "There is no finer cheese making plant in the country -- or in the world for that matter -- than the Bentonville plant." 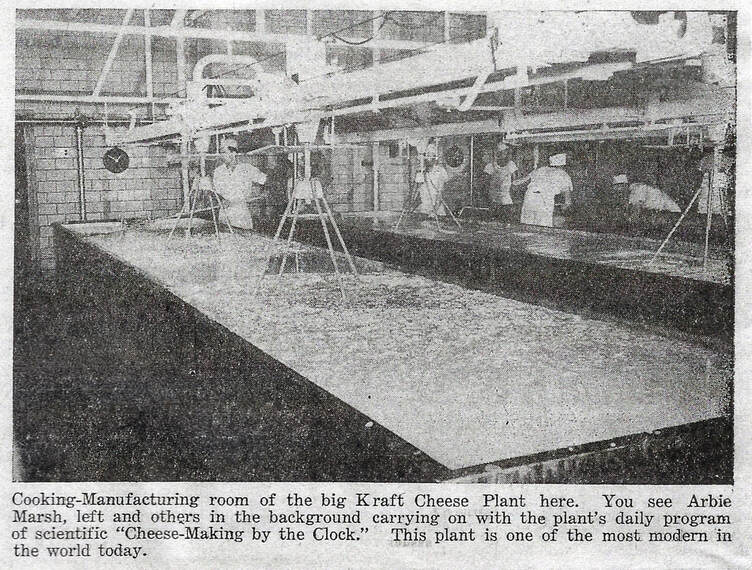 Now that the time has come to assess the progress of this fruitful region of Northwest Arkansas, J. C. Loftis, manager of the Southwest Division of Kraft, and under whose executive direction the plant has been operated since the day it opened, reports: "The Bentonville plant is still the finest, best equipped cheese factory in existence. And I would like to add that in Manager John Neal you folks in this area of Arkansas have one of the best plant managers in the country. I am proud of him, of the plant and of the excellent community relations that have developed under his capable management and the cooperation of farmers and townspeople."

​After the Bentonville plant had reached a smooth-working operational status, an open house for those of the community was held on October 11, 1947, which was attended by more than 5,000 persons and resulted in spreading the fame of the Bentonville area as a milk producing center all over Arkansas-Missouri area. 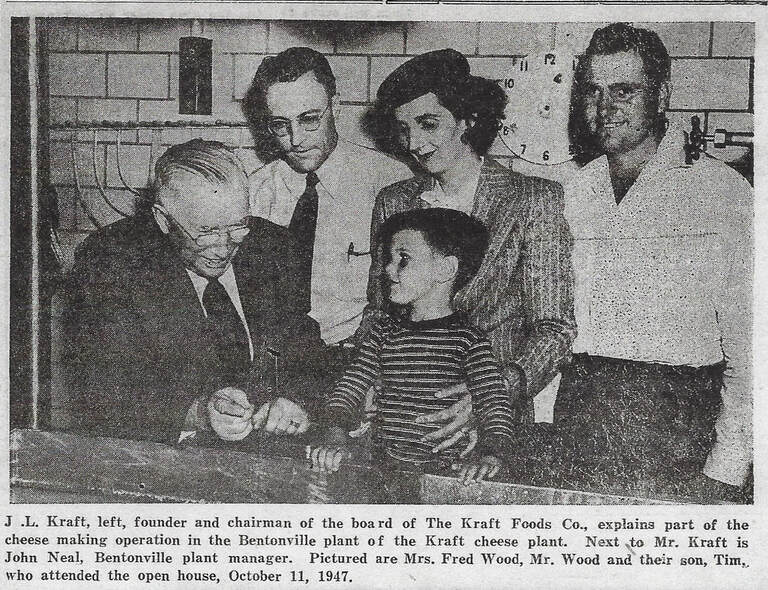 J. L. Kraft, founder of the company and now chairman of the board, attended the open house and spoke in praise of the energy and foresight of Bentonville's leaders in making it possible for his company to locate here. He also pointed out that while the plant had become a major market for milk in the area, his company would like to expand its operations to a still greater volume. "We are able -- and we want to -- process three times the current milk receipts here," he said on that occasion.

​Progress has been made toward increasing not only the milk received at the plant but the entire milk potential of the area since that time, according to Manager John Neal.

"Better dairying practices are gaining greater acceptance in Northwest Arkansas all the time," Neal said. There is much work to be done to insure greater volume and high quality, but the strides dairymen have made here in the last two years are a source of great personal satisfaction to me and to the Kraft field men who are always available to help in any milk production problem a dairyman may have."

Start of operations in the Bentonville Kraft plant coincided with one of the great cheese production advances made in the last 25 years. Through long research and practical experiments, many of them carried out in the Southwest, Kraft had developed a new product - Kay Brand Natural Cheddar cheese wrapped and sealed in the factory in a wrapper that allowed the cheese to cure without rind and resultant waste.

This wrapper, now used continuously in the Bentonville plant in its cheese production is a triumph of the company's research. By previously standard methods cheese was wrapped in cheesecloth and dipped in paraffin to form a protective coating while going through the necessary curing period that develops fine flavor. When the old style cheese was purchased at the grocery it was necessary to pare off this cheese cloth and paraffin bandage with loss to the consumer.

With the new wrapper, delicately balanced to allow the curing process to continue unhampered, no rind is formed and the cheese is completely protected until such time as the wrapper is broken. When it is, the cheese is found to be cured to its very edge and to have lost much less moisture than the old style- all resulting in fine flavor and even texture.

Reporting on the plant's business in the last year in Bentonville, Neal said that it had been the best year yet in volume and that he expected an even greater volume of milk in 1950.

"You are all familiar with the Kraft plant, and most of you know the people who make up the Bentonville branch of what we like to call the 'Kraft Family.' We like to feel that the milk checks that go out to our patrons are an investment in the future of the Bentonville community and to better dairying here and everywhere.

"I am proud, and all the Kraft employees here are proud as well, to be members of Bentonville business community."

The building was later converted into what is called the The Momentary, which is a satellite of the Crystal Bridges Museum of American Art. The Momentary has space for contemporary visual, performing and culinary arts. It also houses the museum's artist in residence program.