Jim's Feed Store
By J. Dickson Black (Story published in 1960)
"I built my feed business on custom mixing of dairy feed," said Jim Statton, owner of Jim's Feed Store in Bentonville, Arkansas. "Because of the custom mixing I was able to build a new store and buy new mill equipment."

For eleven years, Jim ran J & A Feed Store on South Main Street. It was a small store, but he had built up a good trade with the dairy farmers. Eighty percent of the feed sold was cow feed. The rest is chicken feed, hog feed, whole grain, feed supplements, seed and
fertilizer. 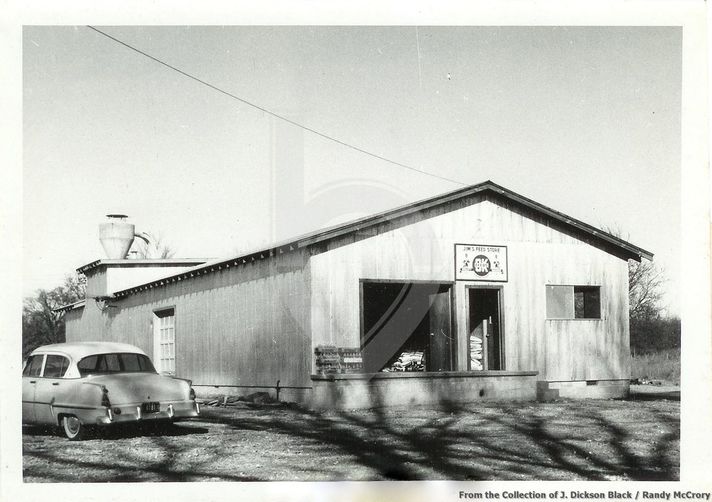 ​In 1953, Statton had put in seed cleaning equipment just to work as a side line. This was a big help to the farmers trading with him. Many of them who harvested seed, planted it without having it cleaned, as it was too far to get to cleaning equipment. This helped in building up his business.

"I had known for several years that I needed a new and bigger store," said Statton, "So last spring I started planning for one. We moved in to the new building on September 1st, 1960. The new buildings and equipment cost $25,000 and they are worth it."

Statton built two new buildings at his new location. The feed store and feed mill is in a 120 x 30 foot steel and concrete building. The seed room is now in a separate building that is 40 x 60 feet, made of steel. The location is a better one for most of his customers as it is on the truck by-pass on the edge of the town. It sits on a 3 1/2 acre lot, so room will never be a problem for them. 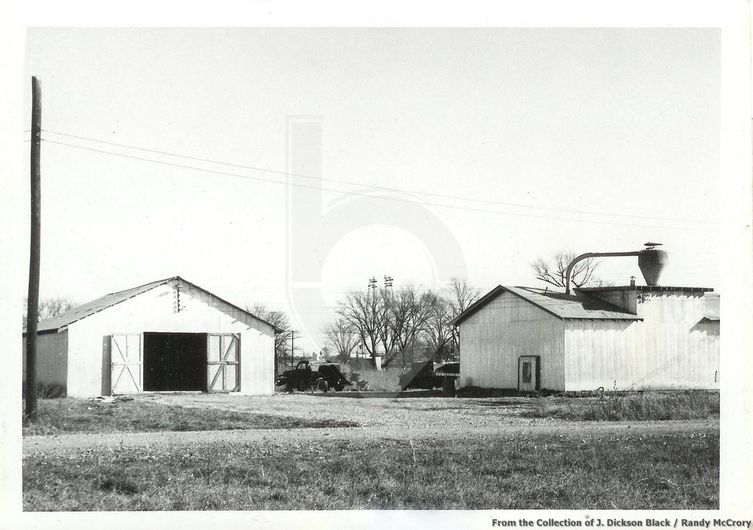 ​J & A Feed Store - Seed House and back end of the feed mill
​The feed mill equipment is all new. They have 2 new Texas Cyclone Vertical Feed Mixers, a new 20 inch Hammer Mill and Molasses machine that will handle 80 bags an hour. 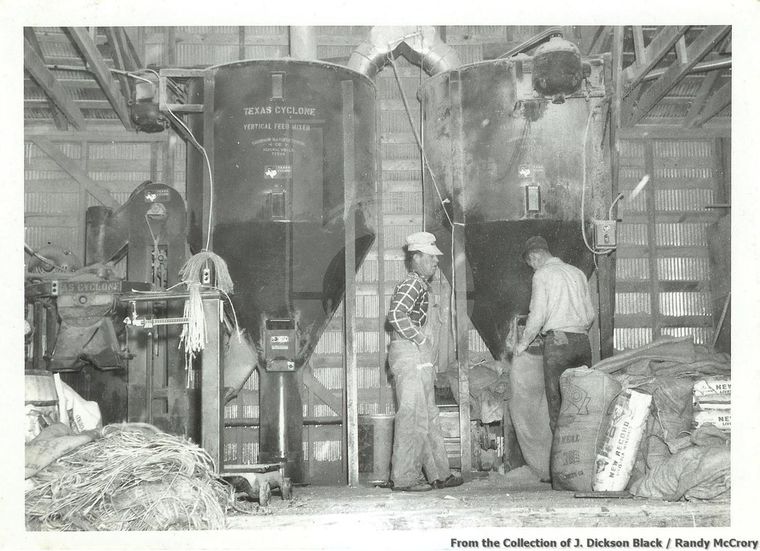 Jim Statton Jr. sacking feed, as Hurcel Holland stands by to help.
​"I drew the plans for both buildings," said Jim, "And picked the equipment that would take care of the jobs I knew I would have. My years in the feed business were a big help in doing this."

He kept the equipment that he had for the seed cleaning and moved it to to the new building. This equipment was almost new. He plans to add a few more pieces of equipment here as it is needed. They left room for it when they put it in the other equipment.

The new feed building has three loading doors, one in the front and one on both sides. They have overhead doors so they are up and out of the way when they are opened.

Almost all of his work is done at the back end of the building. Here is where all the custom grinding is done. There is room for two trucks to back in here at one time. One backs in at the hammer mill, so a farmer can be getting a load of feed and hay ground. Another truck can be alongside, backed up to one of the mixers to load up what they have mixed for him.

All the equipment for the custom mixing is in this part of the mill on a ramp along the back wall of the room. The two mixers are kept going 8 hours a day. Most of this feed mixing is custom mixed as the farmer waits, but Jim also grinds and mixes some feed to sell to other farmers who do not have their own grain to grind. One large sliding door closes this back room up at night.
​
In the front are two offices, finished in knotty pine. One is where they wait on the customers, the other is Jim's private office. "Out of the three hundred or so customers I have, over two hundred of them use custom mixing," said Statton. "This gives them a chance to use the grain that they grow." 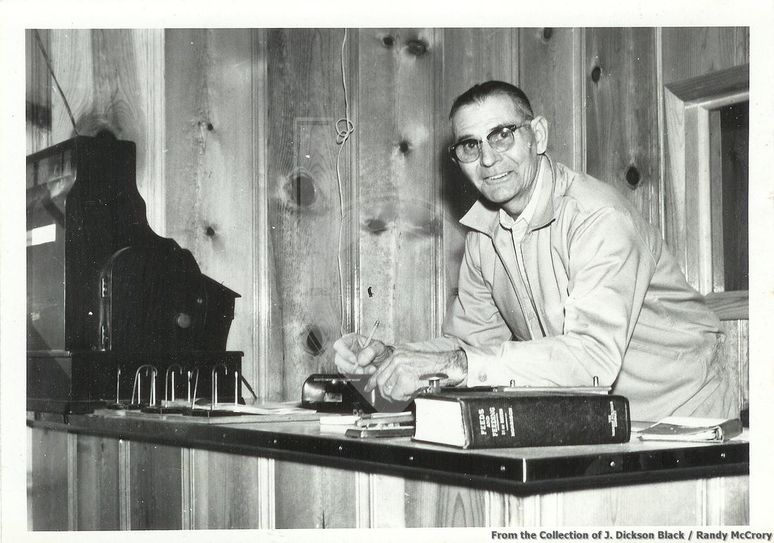 Owner Jim Statton writes up a ticket for a feed order
He charges 25 cents per hundred for grinding. They pay him for the rest of what he puts into the feed for them, but the mixing is free. Most of these farmers have worked out a formula that goes best with their cows. When they run out of their own grain, they buy all they need from Statton and have him mix it the same. He mixes molasses with 90 percent of all the feed he mixes.

He  has a cow feed that they mix themselves that is very good, and some farmers just change to that when they run out of grain of their own. He sells Lipscomb chicken feed and a few other ready mixed feeds and minerals.

"We sell about eight tons of feed a day,'" said Statton, "And the custom mixing is what has kept the customers coming back. We try to keep caught up at all times so no one has to wait too long on their mixing. This fast service has helped, too."

"I cut my feed cost in half by custom mixing and using my own grain," said C. M. Lowry, grade A dairy man, who milks sixty head of cows. "I think that the winter pasture I get pays for planting the grain. Then when I feed it back in my dairy feed all I have to charge for is the harvest. Jim's fast service keeps me coming back. Then, too, I know he puts in what I am charged for."

In the seed cleaning room, Statton has a Clipper Cleaner Super 147-B and a Carter Separator. Last year he cleaned over 100,000 lb. of seed and this business is fast growing. He charges $1.50 per hundred for seed cleaning. He is the local buyer for the Rudy-Patrick Seed Co. of Kansas City. He cleans all the seed he buys for them before it is shipped out. 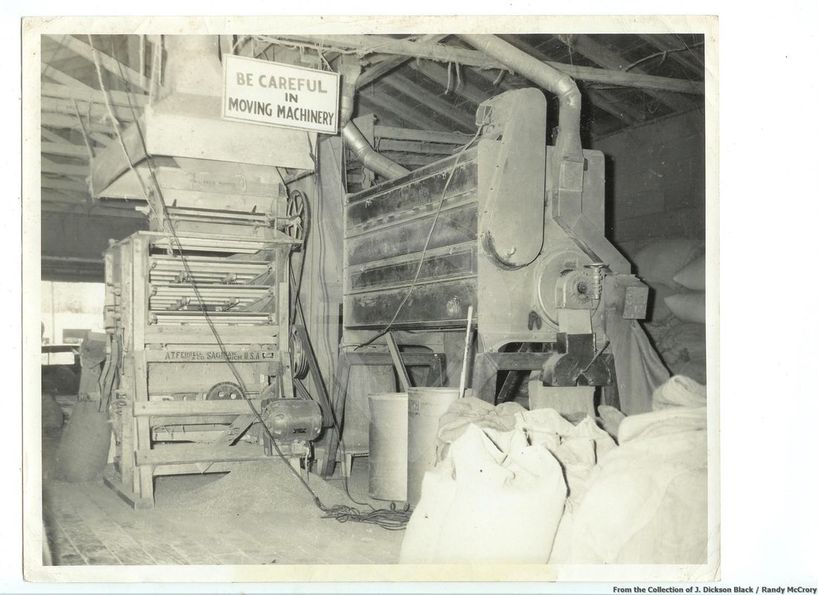 J & A Feed Store - Clipper Cleaner Super 147-B and Carter Separator
"The cleaner sure is handy." said Statton. "I buy a lot of whole grain for resale, and I can clean it and know that the whole grain I sell is clean. The customer sure likes this grain as it is better, too."

Statton has just three full time men working for him. The mill is laid out so as to save time and labor, and this is saving him money now.

"My custom feed mixing was what built the business so that I could build the new store and buy new equipment," Jim Statton said. "The business has picked up 20% since I moved out here and can handle more feed. The custom mixing will always be the bulk of my business, and I like it that way."

"No matter what you are selling, you have to give good service," said Statton. "And we try to do that whether it is seed cleaning, feed mixing, or someone is buying ten pounds of chicken feed for some pets. It has kept me in business and will keep me there as long as I give the service they want."