A  Letter To Home

A Letter Home
Published uder the title, M'lindy - The Squaw-man's Daughter - A True Story of the Beautiful Indian Territory
by K.K.
Apparently the first installment in a story series. Note: This is written in dialect and is reprinted exactly as published.

"Say, Bill? D' yuh recollec' that little glasseyed calico pony I had up thar las' yer? 'N how I scooped them Kansas fellers with their bobtailed quarter hoss?That wasn't a race, it was a puddin - jist like gittin money frum home. But that little speckled cayuse could pick up her feet the pertest o' any thing I ever owned, 'less it was the bay hoss I rid through th Bosting mountains ime'o th' war. He was a jumper 'n no mistake. I'll never fergit th' night he saved my neck comin' out o' Bentonville. Yuh see, it was jist like this: We'd fit th' battle o' Pea Ridge n' had th' Johnnies hidin' in th' brush. Part ov our forces was camped over on Sugar Creek, clost by a old mill with a big wheel hung to it, or a big wheel with a old mill hung to it, yuh could hardly tell which they 'uz so near ov a size. We'd laid 'round camp 'til we're tired o' eatin' com'osary chuck n' drinkin branch water, 'n so one mornin' a lot ov us got started out tuh see what we cud find. Three or four ov us got into Bentonville, 'n I got lost frum the rest, but I didn't keer fer that as there wus no signs 'o rebs about, 'n th' pickins was good - considerin 'twas war times. I found a keg ov prime old mountain corn juice in a cellar, 'n after takin' a couple o' drinks - 'bout two fingers in th' bottom ov a tub - I filled my canteen, 'n 'long about dusk I started back her camp, feelin' able tuh take keer ov old Pap Price 'n hull blamed army myself. Wus yuh ever in Bentonville? Well its prairiesouth 'n west o' town, 'n timber east 'n north. I started out northeast towards camp on Sugar Creek, 'n jist 'n th' edge o' th' timber a big Johnnny stepped out o' th' brush on each side o' the road 'n tuk my hoss by th' bridle with one hand 'n pinted  a oldfashioned hoss pistol at me with tother. They perlitely invited me tuh climb off as they wus tired 'n wanted tuh ride. I was jist drunk 'nuff tuh want tuh argy th' case with em, 'n lolled over on my horse's neck fur a parley: I wus cook for our mess, 'n before leavin camp that mornin' I stuck our best butcher knife in my boot, thinkin' it might cum handy. All tuh once I happened think o' thet knife, 'n in less'n a holy minit I whipped it out o' my boot, run the blade under th' headstall o' th' bridle 'n give a quick upcut. Th' bridle parted 'n went over his ears, 'n I clapped th' spurs into 'm 'n yelled! Great balls o' fire! Thet hoss jumped clar over them Johnny's heads 'n lit out down the road like th' devil breakin' bark. I couldn't stop 'im without a bridle 'n so I jist sot in th' saddle 'n watched th' trees go by. He kep right down th' valley, splashin through the crick a half dozen times 'n never checked 'till he got into camp." 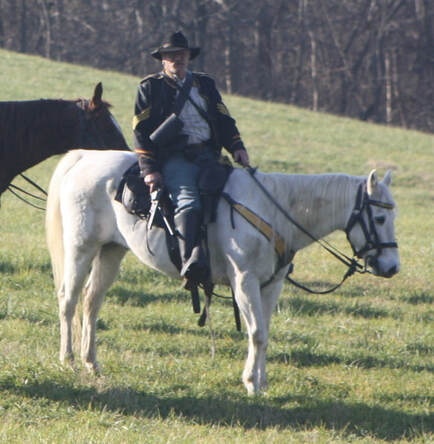 "Speakin' o' splashin'," broke in the onr addressed as Bill, "makes me think o' th' big blue cat I caught over there by the mouth o' Sugar Crick, on White river. Never see any o' these ol' yaller mud cats there - nothin but blues 'n channel cats; but thet perticuler cat wus a corker -- a foot 'n a half betwixt th' eyes, if he wus a inch, 'n a mouth yuh could throw a water bucket in."

A fox squirrel ran up a big burr oak that stood near the cabin by which the men were sitting; and crawling out almost directly over them, flattened himself out on a limb and looked down at them as if grieved at the propensity of mankind and lying and self- glorification. Wrapped up in their own volubility, these garrulous old cronies whiled away the drowsy summer afternoon by swapping lies and smoking long green tobacco in corn cob pipes, moving their seats occasionally to follow the shade as it veered round the cabin. The one called Dick never wearied of recounting his feats of horsemanship and valor "durin' the war," while his companion was always able to find something in the story, however irrelevant, to remind him of a fish he had caught somewhere, and these fish of his, by a strange freak of nature--or shall we say art? -- alway kept on growing after he had caught them until they attained almost leviathanic proportion.   (to be continued)