Bentonville - The meanwhile Rogers and Siloam Springs are respectively seven and nine years old. Bentonville, the shire town was an established business and social center before either sprang into existence. It is of the type of the solid southern towns, a little slow to take hold of strange things, but withal backed by good hard money, good sense, refinement, and a hospitality as free and kindly, as the sun skies smiling above their favored region.

It has suffered its mishaps in time. It was razed to the ground by the ravages of the war. Railroad connection with the county was delayed until seven years ago, and its commerce was uncertain and limited. And afterwards, when that system decended into the state it fell under the displeasure of the "Frisco company," who as condition of constructing the main line to the town, demanded the earth and the fullness thereof, which it was found impossible to give. But all the same it continued to bob on serenely, and having in the end become connected with the main line of the "Frisco" by a stem road, has grown to be the largest, best business, and most refined social center in the county, to say nothing of having become one of the four most important points in the state north of the Boston mountain, Fayetteville, Eureka Springs and Harrison being the others.

The site is one well set out upon the area of the table lands, and viewed from the top of the court-house is seen to be set down amidst one of the loveliest and most fruitful regions in all North Arkansas, the scene being that of a countryside landscape, flecked all over with green fields, orchards and gardens, and everywhere comely cottages filling in the picture sufficiently to give the prospect the effect of a grand system of gardens, and embowered lawns. 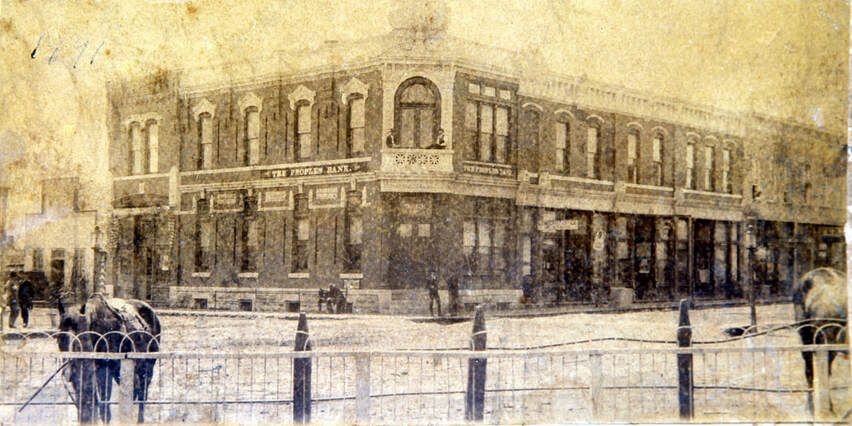 Late 1800's image of the Peoples Bank that sat on the southwest corner of the Bentonville Square
It is situated notably in the very heart of the orchard district of the country, there being now planted in the area directly tributary to the town 800,000 of the 1,900,000 apple trees distributed throughout the whole area of the county. And likewise is seen to command in greater part the trade of the table lands and prairies of the county, which conception is borne out in the fact of the volume of its trade aggregating a sum total above the remaining actual business of the county.

Having grown wonderfully during the past two years, it has come to add to its properous trade industrial enterprises called for by the mixed products of the county, as will be observed in an inspection of the accompanying directory of Bentonville. And according to the movement it may be cofidently looked for that in twelve months its manufactures will equal the value of its trade.

In the social scale it at a glance takes rank as a refined community, the citizens bearing themselves with dignity, and their wives and daughters are among the comeliest and neatest attired in the state. In fact, in the latter respect it boasts rightfully of having the greatest number of "pretty girls" in the state. Of the whole the writer has seen five of their belles, and while all differ from each other, are very lovely. There is one, a gifted woman who, in returning from the "City of Roses" to her girlhood home has brought back with her a beauty fit to adorn a queen. There is another also, a gifted musician, who to beauty adds the cheerfulness of a bird winging its happiest morning flight. There is another toiling in the sight of many, whose beauty suggests at once at once the heroines of the old romances. There is another, a daughter of a distinguished physician, with deep brown eyes, a very beauty in every feature that makes women lovely. And last and youngest of the five, there is a maiden of 17 summers, with exquisite patrician mold of features, a Miss Kate Robinson, who no doubt is the lovliest girl of her age in the state.

Image of the Bentonville Railway train at the depot in Bentonville.
​The depot was located at the northeast corner of the square at that time.
Exclusive of banking and loans, which would have carried the sum to double, the aggregate business transactions in 1887 was $896,000.

As shown by the accompanying exhibit of the Bentonville Railway company, a home corporation, the tons freight received amounted to 2833: and the tons freight forwarded, 5477. Number of passengers arriving and departing in 1887, 9259

The number of inhabitants is 3200.