A Sculpture In A Bluff At Osage  Mill

A Sculpture in A Bluff At Osage Mills
By Billie Jines, Scene Editor of the Cave Springs Scene (1971)
In a bluff near the historic spring at Osage Mills, there is a six-inch square sculpture.

Bearing the likeness of an opened Bible, the carving bears these words "Holy Bible 1903."

We discovered the sculpture by searching for it one day about six years ago. Picnicking there on the Big Osage, we chanced to stop to talk with [a lady], whose family lives near the church building at Osage Mills. She pointed out the meadowland where the Old Settlers Picnics used to be held and told us how we could go up the edge of her family's farm as it borders Osage Creek and see the historic spring, which furnished drinking water for the Old Settlers Picnics. She also told us about the Bible carved into the bluff.

[The woman] explained that in the pre-automobile days, the spring had been the gathering place on Sunday afternoon for young people of that area and sometimes they whiled away the long afternoons by carving their initials in the rocks and bluffs near the spring.

Intrigued by the prospect of locating the Bible, we left the road just south of the bridge over the Osage (the bridge near the home that lies northeast of the church building.) Climbing over the fence, we followed the creek, with some members of our party wading the clear creek and others following along the bank through the underbrush and what was left of a once well-worn pathway. We found the big spring still gushing forth from the hillside, and, after quenching our thirst, we began our search for the Bible. 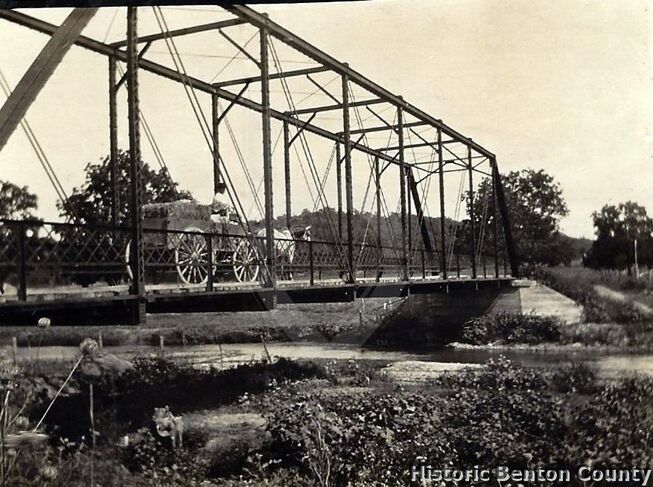 ​Osage Creek Bridge- This bridge was located on County Road 71 southeast of Healing Springs. The bridge was built in 1911 by the Missouri Valley Bridge & Iron Company of Leavenworth, KS. It was placed on the National Register of Historic Places in January 1988. By 2013 the bridge was listed in poor condition upon being inspected. In 2014 it was replaced by a new structure. The bridge was 127.9 ft in length and 13.1 ft in width.  This photo is believed to have been taken right after the bridge was constructed.
Apparently we were looking too near the spring, and we finally gave up the search. However, starting back down the stream, one of our group glanced up and saw the square outline higher up a bluff. We scambled up a clay embankment to see it better.

Alas, lichen growing over the bluff had obscured all but the outline. We brabbed handsful of damp leaves and scrubbed at the sculpture, then talked a teenager in our party out of his tee shirt so we could dampen it in the creek and do a better job of cleaning the mossy growth from the rock carving.

And there lay the beautifully executed carving - unsigned and mysterious.