The way I heard it  By Billie Jines
Alvin Seamster's Museum - Pea Ridge Graphic Sept. 14, 1967
When the earliest families were coming from Eastern Tennessee to settle what is now Benton County, there came in 1832 one couple named Mr. and Mrs. Samuel Cole. With them they brought, among other things, a laundry basket.

Many years later, that laundry basket was given to a ten-year-old grandson, Alvin Seamster. So proud was the boy of the item that he hid it. It became the first article of historical significance the boy was to collect. Today [1967] it is but one of many thousands of historical items to be found in the museum owned and operated by Alvin Seamster within seven miles of the spot his grandparents settled on 135 years ago. This is on Hwy. 62, south of Garfield and only a short distance north of the Pe Ridge National Military Park. 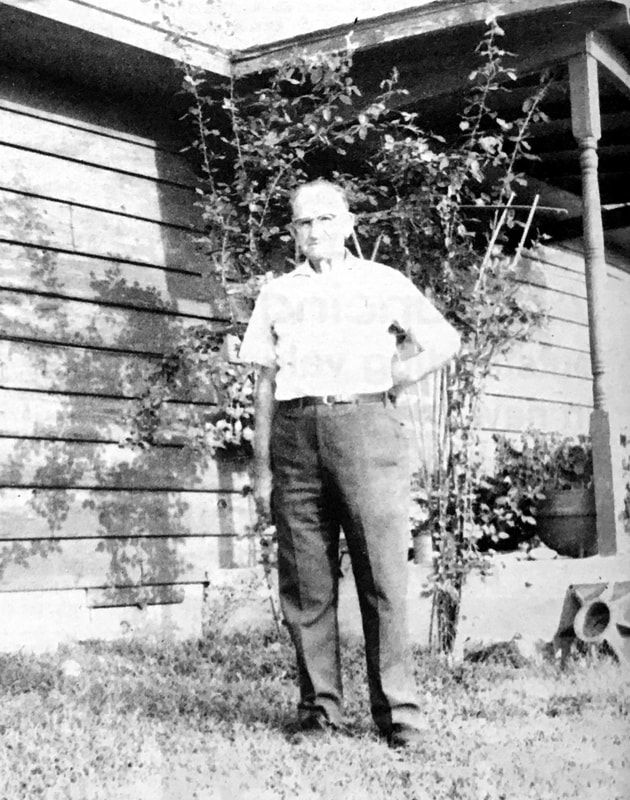 Widely-known historian Alvin Seamster pauses in front of his historical and geneological museum on Hwy. 62 South of Garfield
The fact that Seamster put in some 30 years in the practice of law at Bentonville, including seven years as the city's mayor, never deterred him from his love of history, particularly history of his immediate vicinity.

For two years before his retirement in 1958, he plied up and down Hwy. 62 searching for the exact spot where he would build his historical and genealogical museum. He found it on a long sweeping curve, and four years later, he officially opened what had been his long time dream.

Supported only by donations ("I didn't want to afix a charge because of the school children who often can't pay." he explained), the museum attracts five to six thousand visitors each summer, with many other stopping during the off-tourist season.

In addition, the genial historian run down the family history of many persons. Last year alone, he did 150 families history covering 28 states.

Wearing a perpetual smile (He traces his Cole ancestry back to Old King Cole, the merry old soul of Scotland history), Seamster retraces the story back of item after item in the museum for person after person, not seeming to tire of the stories.
​
"It just comes natural," he says. 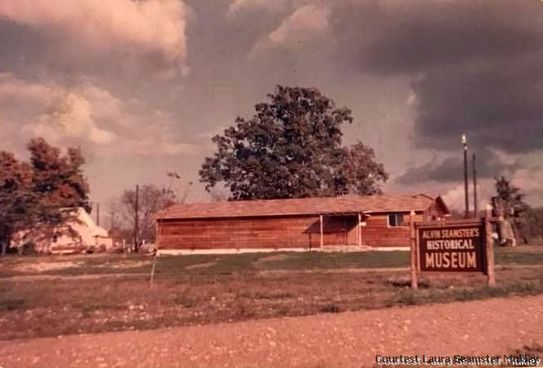 "It just comes natural," he says.
​It becomes significant to see that many of the items in the museum must have seemed like so much junk to others at the time Seamster saw historical worth in them and treasured them. For instance, there's the badly worn old cane-bottom rocker. It might have seemed worthy only of being discarded by some, but Seamster has given it a place of esteem, pointing out that it was made by a slave for John and Mary Patterson. The couple lived on what was later to become the Pea Ridge Battlefield. When a granddaughter of theirs, Dove Patterson of Avoca, saw that the chair had been given to Seamster by another of the couple's descendants, Mrs. John Jones of Pea Ridge, she brought a picture of the John Patterson's to be displayed  in the chair.

Many of the items are connected with the famed Civil War Battle of Pea Ridge. Among the 35 guns is a weatherbeaten old double- barrel shotgun. It was was found under a ledge on the battlefield 60 years after the battle by a Mr. Brewer of near Bentonville, and later given to Seamster. A Chicago authority on guns tells Seamster that an old squirrel rifle in the collection was made by the same gunsmith who made "Old Betsy" for Davy Crockett. Fred Troutt of Centerton once passed the gun along to Seamster, explaining that his father, Rufus Troutt, carried it during the Civil War, and his grandfather , John Troutt, used it in the Revolutionary War. 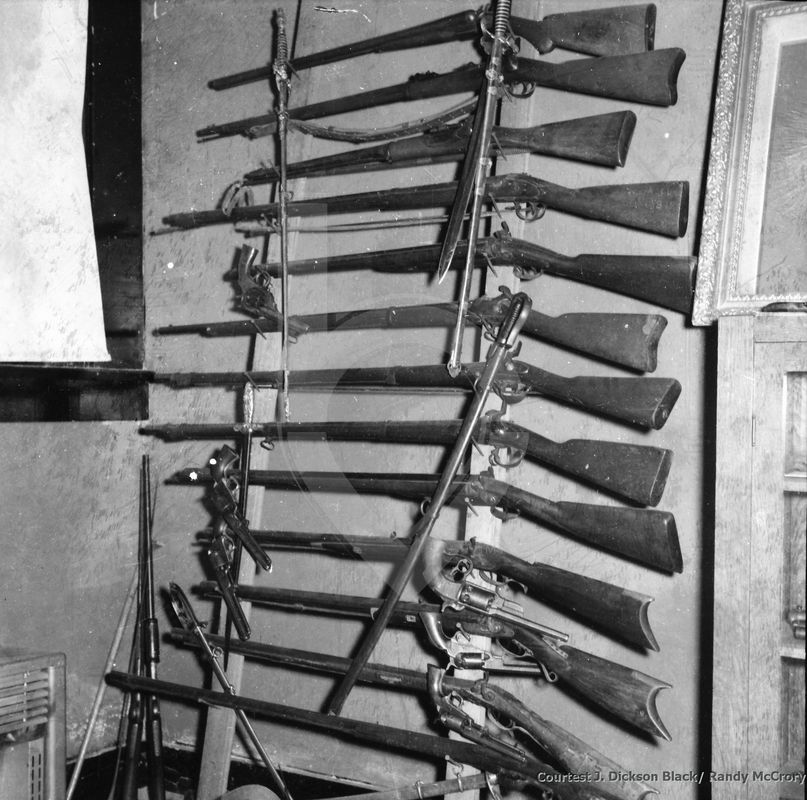 This is a photo that shows the collection of rifles and pistols that Mr. Seamster had in his museum.
Perhaps the most colorful gun history belongs to one that lay buried 100 years. It belonged to Doghead Glory, a Cherokee famed in Benton County history over a murder for which he was convicted and hanged. His gun was buried with him in the Dickson Cemetery west of Bentonville. A century had passed when someone noticed the tip of the barrel sticking through the sunken grave.

Many of the rusty old cannon balls and other articles were picked up by Seamster on the vast battlefield, and others were passed along by those who have plowed them up and picked them up over the years.

Among Seamster's most prized possessions are a linen Revolutionary flag that bears 13 stars, a Confederate Flag carried by the 16th Arkansas, and an autographed picture of Robert E. Lee.

But Seamster handles each item with tenderness. Here a drum carried by the 37th of Illinois during the Civil War, there a rare mechanism once used to shape goose quills into writing pens. Over here, a framed display of all the cattle brands ever authorized in Texas, and here sparkling cut glass, valuable china, and pewter and cast iron utensils utilized by pioneer settlers. There's the jacket worn by John Cavness the day he was shot in the Battle of Pea Ridge, a sheaf of flax, properly framed and given to Seamster by a native of Scotland, the bleeder once used by old Dr. Horace Patterson of Pea Ridge, a surgeon in the Confederate Army. It was among items of her grandfather's passed along to Seamster by Mrs. Finis Wood, who now resides in Pea Ridge. 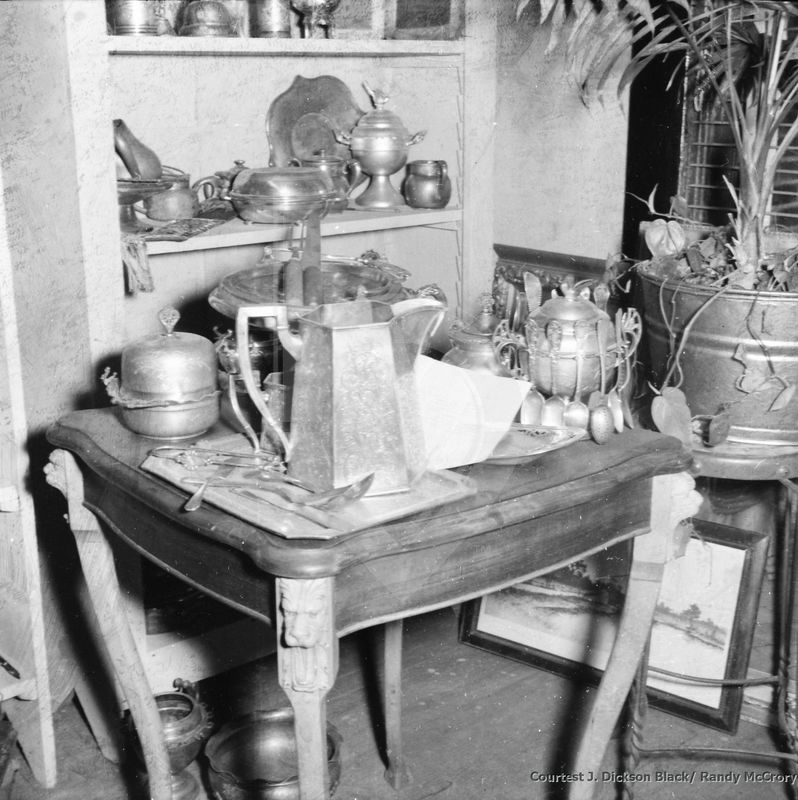 Here is another display in the museum of old kitchenware used by early settlers
The items such as these are in addition to some 1,500 documents, 2,000 newspapers, and a library that includes at least 400 first editions. Nor does that include the stamp and coin collection not kept at the museum.

And, then, there are the census reports. Not only does Seamster have the census reports for the first 50 years of Benton County's history (1830 - 1870) but he has collected the census reports for such areas as North Carolina, South Carolina, Virginia and Kentucky for 1870, these being areas from which many of Northwest Arkansas' settlers of that era came. Since most came from East Tennessee, he has that census for 1830, and can follow some of the same people to new locations in Arkansas in the latter censuses for 1840, '50, '60.

Many come to Seamster Museum to work on family history, some coming from as far as California and staying as much as two days. An historian whose interest cannot be confined to just his own vicinity, Seamster belongs to historical societies in Arkansas, Oklahoma, Kansas, Missouri and Tennessee.

During the summer, he keeps the museum open on Sundays, as well as weekdays.

Asked what he expects to do with so vast a collection of historical material, Seamster has a ready answer. His son, Buddy, a Rogers school teacher, has already purchased a farm adjoining Seamster's Garfield property, and expects to one day retire there. The museum, say his father, will be perpetuated through the family. Seamster adds, though, the realization that while he can pass along his collections, he cannot pass along the entire amount of history stored in his own mind. He has tried. For instance, he has stood by item after item in the museum and taped recorded his own discussions of them.

Seamster's storehouse of historical knowledge, though, is steeped in personal recollection. Although he is only 76 years old, he gleaned much in his earlier years from sitting on park benches and standing on street corners listening to pioneers of the area discuss their experiences with each other.

In sharp contrast to Seamster's long-standing interest in history is his wife's interest in painting. Visitors to the museum look straight ahead as they enter and see, first, many portraits and landscapes painted by Mrs. Seamster. This talent was uncovered by Mrs. Seamster after she was past 60 and after her husband's retirement. Most of those paintings hanging in the museum were executed in the last 10 years. Not only is her work of a high caliber, but the artist is also prolific. She has sold dozens of her paintings in the few years that she has been producing them.

So it is that the Seamster Museum not only is a colorful and vast collection of items pertinent to the past, but it is, also, history in the making.

Note: The museum is no longer open. The contents of the museum were auctioned off many years ago.