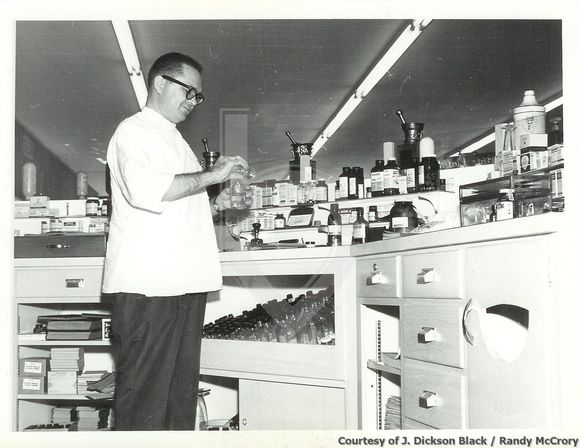 ​George Joseph “Joe” Applegate – was born in Bentonville on February 8, 1923, and was the son of John Buchanan and Blanche (Marney) Applegate. Mr. Applegate’s grandfather was founder of a drug store in Rogers in 1881. His father was also a pharmacist and operated a drug store at 103 N. Main St. in Bentonville. Joe started helping customers as soon as he could see over the counter with the help of a Coke crate. He remembers filling up 5000 flu capsules in one day for his father.

Mr. Applegate joined the Army on December 8, 1942, in Austin, Texas, the day after the Pearl Harbor attacks. He entered the service as a private but by the end of WWII had achieved the rank of Second Lieutenant. During his service he earned a Bronze Star and six ribbons.

On March 27, 1957, he married Miss Melba Garrett of Rogers. At a later time Mr. and Mrs. Applegate were divorced. In 1957 he opened a new drug store that is now the location of the Arvest meeting room. He owned and operated two drug stores, one in Bentonville and the other in Decatur, Arkansas. He was associated with a number of groups: Chairman of the National Federation of Independent Businessmen, Director of the Chamber of Commerce, President of the Bentonville Rotary Club, and the High School Alumni Association. Fraternally, he was a member of Kappa Sigma and the Elks Lodge. In politics he was a affiliated with the Democratic Party. Later in life he moved to Tulsa, Oklahoma, and married Norma Thieman. He died April 18, 1997, and is buried in Tulsa, Oklahoma.