The Bentonville Railroad and the Frisco Branch
By Tom Duggan 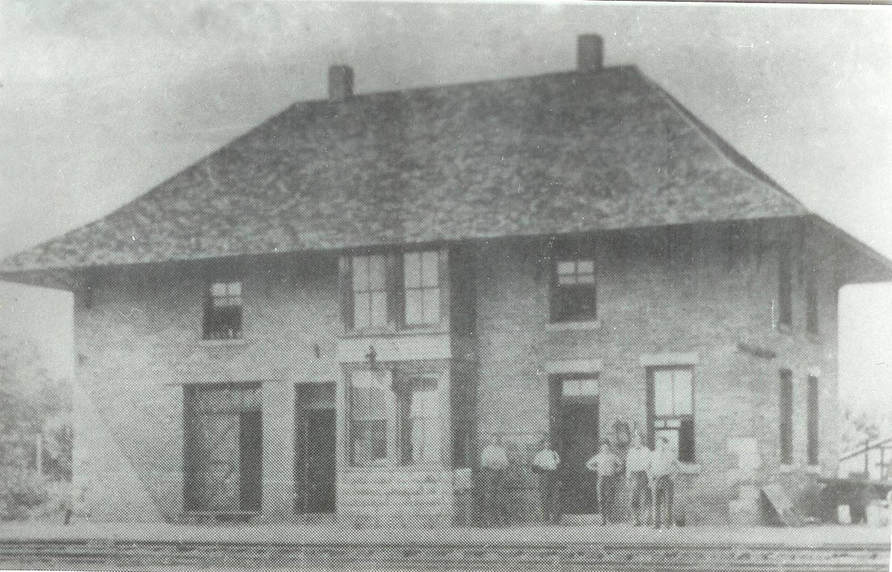 Out of the disappointment of the Arkansas & Northwestern project came the solution to Bentonville's railroad frustration. January 27, 1898, Bentonville held its last railroad convention. The principal speaker was John Melville Bayless of Cassville, Missouri. Bayless in July 1896 had completed the Cassville & Western Railway, a 4.5 mile line that linked Exeter, Missouri (on the Frisco's line to Northwest Arkansas) with the county seat of Cassville, Missouri. Bayless' idea was the Arkansas & Oklahoma Railroad (the "A & O") that would run west from Bentonville to Gravett, Arkansas. (site of a connection with the Kansas City, Pittsburg & Gulf Railway) and then "to some point in the Territory of Oklahoma." Unlike other promoters Bayless, a major shareholder in the Cassville & Western Railway, was able to place $5,000 good faith bonds with the Bank of Rogers and the Bank of Bentonville. Bayless had credibility as he and his brother had founded the Bank of Barry County, Missouri following success in the dry goods trade. To obtain the mew line Bentonville would have to raise $25,000, obtain ten miles of not less than sixty-six foot wide right of way west of Bentonville, and donate the assets of the Bentonville Railroad. Rogers had to raise $20,000 and provide grounds for a depot and yard. The subsidy was payable to the Arkansas & Oklahoma Railroad in two installments; 50 percent when ten miles of new line had been "graded and ironed" and 50 percent not more than sixty days after the connection was made with the Kansas City, Pittsburg & Gulf at Gravett, Arkansas. Bayless promised to start work by March 25, 1898 and committed an operating line to Gravett, Arkansas by January 25, 1899. Bayless shrewdly did not commit to link the Bentonville Railroad with the Arkansas & Oklahoma Railroad in Bentonville. Thus, citizens of Rogers could not benefit unless they provided their $20,000 subscription. Bayless could have constructed the new line westward from Bentonville and forced Rogers shippers to transship between the Bentonville Railroad and the unconnected Arkansas & Oklahoma.


​Public support for the Bayless plan was immediate and positive. The Bentonville Railroad Committee issued a broadside on February 23, 1898 explaining the project to all citizens. Bentonville and Rogers raised the full subsidy amount by March 1898. Upon completion of the Rogers subsidy drive the town staged a huge public celebration with an orator, music and firing of anvil batteries by the Rogers artillery regiment. In March 1898, Bayless took control of the Bentonville Railroad. He doubled Sunday service to two round trip with service on other days increasing to three Bentonville-Rogers roundtrips. The new schedules allowed better connections with Frisco trains at Rogers. The old roadbed was rebuilt and 25,000 new oak ties were laided. Sixty-pound steel rail replaced the worn out 1883 rail. Rebuilding of the Bentonville Railroad became urgent as the new A & O engine s and passenger coaches could not operate on the old track. Construction began in January 1899 on a new depot in Bentonville to replace the one story plank depot of the Bentonville Railroad. The impressive new two story A & O depot was of brick and native stone construction. The Bentonville Railroad timedard appeared in the bentonville newspaper until March 30, 1899 when the A & O issued a new timecard. The new timecard showed service only from Rogers to Gravette, Arkansas. The time for a one-way trip between Rogers and Bentonville dropped to 20 minutes.
The Arkansas & Oklahoma reached Gravette, on the Kansas City, Pittsburg & Gulf in November 1898. Mr. Bayless was a hard worker and on December 26, 1898, He received the second and final installment of subsidy. The Ozark Construction Company built the line for a fixed price of $8,000 per mile. By June 30, 1899, A & O crossed the Arkansas border was was 1.41 miles into Missouri enroute to Southwest City, Missouri. After a pause perhaps for cash flow reasons, in 1899 the tracks reached Southwest City, Missouri  some 35 miles from Rogers. By September 1900 the new line had graded right of way to the vicinity of Grove, Indian Territory. It then stopped on the eastern bank of the Grand River. Bayless had always been vague about the ultimate destination of the Arkansas & Oklahoma Railroad. He inflamed public opinion by saying the A & O would go where the best bonuses were available.
Thr Rogers Democrat of September 6, 1900 reported Bayless wanted to sell the A & O to another railroad. To heighten buyers interest
Bayless speculated he could continue his railroad to Miami, Indian Territory (served by a subsidiary of the Frisco), Chetopa, Kansas (on the Missouri-Kansas-Texas Railway), or Coffeyville, Kansas (on the Santa Fe).It turned out that the intended A & O terminus was Vinita, Indian Territory, a town served both the Frisco and the Missouri-Kansas-Texas Railway. This proposed Vinita terminal may have concerned Frisco management. In November 1900, it offed to purchase the Arkansas & Oklahoma from John Bayless and William R. Felker, owner of the Bank of Rogers and the other principal A & O stockholder. Bayless and Felker accepted the $357,000 offer. The purchase was completed on November 20, 1900 according to the Frisco Annual Report . The Rogers and Grove line then became the Bentonville Branch of the Frisco. Felker and Bayless were reputed to have made a substantial profit on the sale.