c There was no flag design for the Arkansas territory and none for the state until 1913. If it hadn't been for the Daughters of the American Revolution we might not have one yet.
In 1912, the Pine Bluff chapter of the Daughters of the American Revolution decided to give a stand of color the the Battleship Arkansas, one of the countries newest war ships.
They wanted to give a United State flag, a naval flag, and an Arkansas State Flag. The first two were very easy to find. But when they tried to buy a state flag they found that no one knew that the flag looked like. One flag maker told them to find out what the design was and he would make them one.
A letter sent to the secretary of state Earle W. Hodges asking about the state flag. The reply was that the State had never had a flag.
The fact that the state had never had a flag didn't stop these women. They wanted to give a State Flag to the Battleship and give one they would and did.
Their flag committee headed by Mrs. C. W. Pettigrew started writing articles to all of the newspapers in the state asking artist and designers to make designs for a state flag and send them to the Secretary of State, who would pick the State Flag.
The first committee met at the Hotel Marion, in Little Rock early in January, 1913, with Maj. C. R. Breckenridge, chairman. They failed to pick a design. A second committee meet later that month with Mr. Hodges, as chairman. The chose the design made by Miss Willie K. Hocker of Pine Bluff, who was a member of the Pine Bluff D.A.R. chapter. Over the years there has been only one small change in her design.
The flag is a rectangular field of red, on which is placed a large white diamond, bordered by a wide band of blue, the national colors.
The designer's explanation of the design shows that it was to show that it was a show a number of important events in Arkansas history. The national colors were used because Arkansas is one of the United States. the three blue star upon the white diamond represents the three nations, France, Spain and the United States, which have successively exercised domain over Arkansas. They also indicate that Arkansas was the third state to be erected in the territory acquired in the Louisiana Purchase.
The twenty five stars in the blue band shows Arkansas was the twenty-fifth state in the order of admission into the Union with Michigan which fact is shown by the two star close together at the lower angle of the band.
The diamond was selected because Arkansas has the only known diamond bearing deposit in the United States.
On February 14, 1913, Senator W. R. Phillips of Green Forest introduced a joint resolution in the Arkansas General Assembly to have the selected design adopted as Arkansas official flag. The resolution received a favorable vote in both houses and adoption was completed February 18, 1913. It was signed by Governor Joe T. Robinson,  February 26, 1913.
The only change that has been made in the flag was in 1923 when the state legislature voted a joint resolution that the star above the word Arkansas would represent the confederate States of America which held dominion over Arkansas from May 1, 1861 to May 23, 1865. They then placed three stars under the name.
The Apple Blossom was adopted as the state flower by the state legislature January 30, 1901. The Mocking Bird was adopted as the State's official bird by act of the Legislature, March 5, 1929. 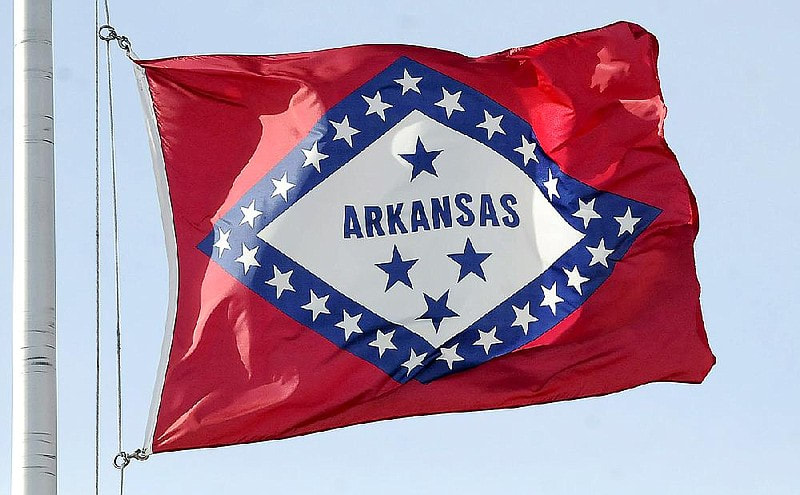