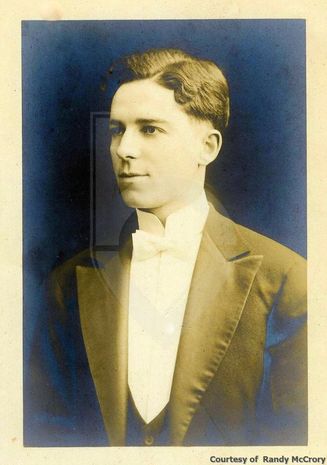 ​Dr. Richard Matson Atkinson  – was born in 1892 and is believed to have been born in Bentonville.  His parents were Richard M. Atkinson, Sr. (1860-1918) and Bertha J. (Fuchess) Atkinson (1861-1925). His parents were married in Crockett, Houston County, Texas but by the 1900’s were living in Bentonville. Dr. Atkinson followed in the footsteps of his grandfather, Dr. Barnabus P. Fuchess, in becoming a physician.
Dr. Atkinson received his medical training at the Cincinnati Ohio Medical College where he met his first wife, Gertrude Lloyd (1895-1950). Gertrude was born in Tennessee but was living with a cousin in Cincinnati in 1910.

After completing school, Dr. Atkinson settled down in Bentonville to practice. For many years he was associated with Dr. C. E. Hurley. Dr. Atkinson was the chief of staff at Bates Memorial Hospital, city heath officer, and served in that office for over 30 years. He was involved with the plans for the first Bates Hospital and its expansion.

After his first wife’s death in 1950, he married Violet McAllister (1909-1985). There were no children in either marriage, but he and Gertrude took on a foster daughter in the 1930’s.
The first cottage built in Bella Vista was for Dr. Atkinson. He passed away in 1961 and is buried in the Bentonville Cemetery.