Poor Fishing Guide Solves 1930 Murder Mystery
By J. Dickson Black
​Published June 30, 1976
​Warning: There is one photo on this page that is pretty graphic
On Thursday, April 3, 1930, the  Benton County Grand Jury met in the courthouse at Bentonville. They heard evidence against Dr. Bass from Mrs. Folta, Miss Powell, and Mrs Pearman, though all that she knew was that Dr. Bass had known William Pearman.

Several others took the stand to add their bits of information to the case. Witnesses told of finding the body, moving it to Gravette, and whatever else they could think to add.

Even Dr. Bass asked to take the stand and tell his side of the happenings.

(After this series began, Clayton Little told a story that Nolen Bulloch, who was one of the newspaper reporters who covered the Bass case, told him (Little) that the reporters would all match coins to see who would interview Dr. Bass the next day to get Bass' latest story. He told Little that Bass had a bigger and better tale each day.)

Bass told the jury that he had known the dead man as both William Folta and William Pearman and that he had over several years, made land deals with the man. At the time, he said, William was buying a track of oil land in Arkansas from him. The past December William had asked Dr. Bass to go to Kansas City with him. He was taking out a $200,000 life insurance policy naming Dr. Bass the beneficiary; It was to last only until the land was paid off.

Bass said he hadn't asked for the insurance, but William insisted he wanted to buy it just in case he died. He didn't want Dr. Bass to lose anything, Bass claimed. He said it was going to take William several months to get 248,000 the full price of the land. Bass added that they all knew money was hard to come by right then.

The insurance had been bought from the Lincoln National Life Insurance Co.

Dr. Bass said that he and William had not talked about the land deal or the insurance after they left the Insurance Office in Kansas City on Dec 29.  He also stated that he had not seen William for the past two to three weeks, until he had seen him dead at Gravette. Bass stated several times that he was sure that the victim's right name was William Folta, and added that that would be proved before long. He said that he didn't know who had killed William, but knew he hadn't.

When asked why he had gone to see Mrs. Folta, he said that he was trying to get William to go and see his mother and stop living his double life.

At 5:30 that evening the grand jury brought in an indictment against Dr. Bass of first degree murder in the death of William Pearman.

Dr. Bass was very cool as he listened to the indictment being read. Special Judge Blansett fixed bail at $20,000. Dr. Bass was sent back to jail as he was unable to raise any bond money. The case was set for the May term of Court at Bentonville.

The next morning Dr. Bass told Sheriff Fields that he would not be in the jail long, as he had a gang coming down from St. Louis. When they got there he said they would just take the jail apart and kill anyone who got in their way.

In the week that followed Dr. Bass told several different stories about his part in the deal. Then the Lincoln National Life Insurance Co. brought suit to cancel the $200,000 insurance policy and sent Dr. Bass a check for the premium that had been paid on the policy.

On Sunday, April 13, Dr. Bass was visited by his wife and Rev. and Mrs. Carl Agee, plus two attorneys. One was from Columbia, Mo., the other was John R. Duty of Rogers.

The next morning Duty told the Sheriff and Prosecuting Attorney Combs that Dr. Bass would admit to having made a false identification of Pearman as Folta. He had maybe done a few other things that were not just right, Duty conceded. One was getting the insurance policy in Folta's name, Duty said but that Bass had been forced to do it by other people, and that he was only to have received a few thousand dollars. It was all against his will but he couldn't help himself, and he had not had anything at all to do with the murder.

Combs and Fields talked over this new story after Duty left. The Sheriff didn't believe any of it. He still thought Dr. Bass had killed Pearman

Each day Dr. Bass had a new story to tell about his part in the drama. He said he had been forced to take part in the insurance fraud scheme under threat of death from some St. Louis gangsters.

Then on April 19, Dr. Bass at last confessed to having shot William Pearman. He said that they had been to Kansas City together and were going back to Columbia on the night of March 26th. Bass had been unable to buy a body to use as Folta's, so he shot Pearman when they were near Rocheport, Mo. He then went home and the next day brought the body to Gravette, where he left it to be found.

They were very sure that Dr. Bass had named Rocheport so he could be tried in his home county, so they didn't put much faith in this story either.

The sheriff told Combs that he did think Bass had killed Pearman on that trip. He also thought Pearman more than likely got drunk, prompting Dr. Bass to think that some day he might talk to someone else about their plans. So he drove to Arkansas and killed him. This also would save him having to pay Pearman any of the insurance money, Fields speculated.

Later Dr. Bass told them that a man who had been his guide on many fishing trips had helped him dispose of the body. Dr. Bass had a long story about this. One day he even said this man had killed Pearman.

They had the Sheriff in Missouri pick up the man at his home in Freeburg, Mo. The sheriff there felt sure the man told the truth.

He said that Dr. Bass had stopped at the guide's poor shack at about 9 o'clock on the morning of March 27. Bass called him outside to the car and offered him $1,200 if he would go on a short trip with him. Dr. Bass gave the man's wife $5 for food until they returned.

A few miles out of town Dr. Bass stopped the car and took the man around and let him see the body in the trunk of the car. Then he told him that he had to help him get rid of the body, and that if he ever told anyone about it he would kill him.

They drove to the place north of Gravette where then threw out the body. Then Dr. Bass gave him a gun and told him to shoot one more hole in the man's head. Dr. Bass then drove to Joplin, where he let the guide out of the car. He gave him $70 and told him to go home and he would send him the rest of the money in a few days. But he never sent the money, the man said.

The guide said Dr. Bass had told him that he shot Pearman the night before, and then drove to Columbia and went to bed with this body in his car in the garage. The next morning Bass drove to Freeburg to get the guide.

At last they had the goods on Dr. Bass. The Sheriff was sure that he could send him to the electric chair. Dr. Bass tried to have his case moved to Missouri, but was unable to because they were not sure where Pearman had been killed. By this time Sheriff Fields had learned a lot about this so-called good citizen. He was from a good family but had been in trouble with the law several times.

"May 8th was a real red letter day in the life of Dr. Bass," Sheriff Fields recalled. "They called me into the cell block at about 4 in the afternoon. The other men in the cells kept saying 'he's killing himself.' When I looked into Bass's cell he was laying on his cot. He had cut his right wrist, and the blood was going all over the place." 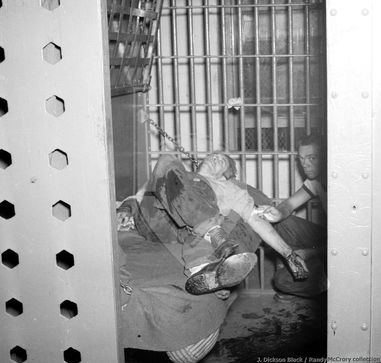 A photo of the events that happened that day at the jail
A deputy was sent after Dr. Dick Atkinson, who came right to the jail. When they went into the cell Dr. Bass tried to kick the Sheriff in the face, they had to handcuff his left arm and chain him to a bar before they were able to stop the bleeding.

From then on, Fields kept a guard with Dr. Bass around the clock.

When the court met on May 26th, Prosecuting Attorney Combs wanted the death sentence for Bass, as he felt "the crime justified it."

But then Dr. Bass pled to the murder. By doing this he knew they couldn't send him to the chair.

Circuit Judge Earl Blansett, at the recommendation of Combs and the Sheriff, gave Dr. Bass a life sentence.

The next day Dr. Andrew J. Bass was taken to the Arkansas State Penitentiary.

After Dr. Bass was parolled, he made a trip back to Bentonville, "just to look around a little," he said. While he was here he said he had felt sure that lawmen in Arkansas were too dumb to figure out what he had done. 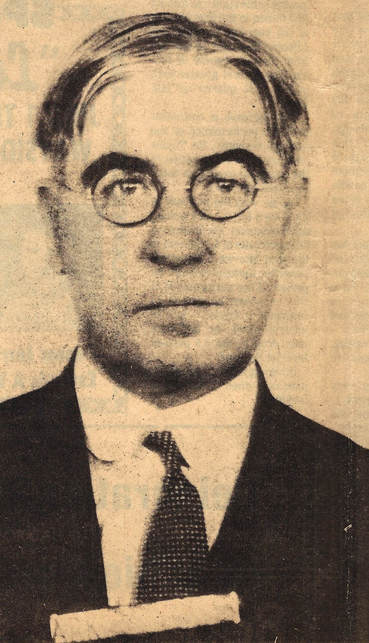 This photo of Dr. Andrew J. Bass was taken when he was committed to the Arkansas State Penitentiary in late May, 1930.