Benton County Ancient History Told
by J. Dickson Black
From The Benton County Daily Democrat February 28,1979 (now the NWA Democrat Gazette)
Benton County has been part of several counties and territories in its history. First it was part of the Louisiana Territory, Crawford County, Lovely County, Washington County, then in 1836 it became Benton County.

Arkansas was admitted as a state on September 30, 1836. The same day Benton County was admitted as the 34th county by an act of the General Assembly, Bentonville was the first town followed by Maysville. As more settlers came to the county more towns started and new roads were opened.

The county was named in honor of Missouri Senator Thomas Hart Benton, a man who worked very hard to have Arkansas admitted as a state.

The first slate of county officials was appointed by the Governor to serve until an election could be held for officials. Those chosen were George P. Wallace, County Judge; John B. Dickson, County Clerk; Gideon G. Pace, Sheriff; Henry C. Hastings, Treasurer; Henry Ford, Coroner; and A. McKissick, Surveyor.

The first meeting of the county officials, and first several terms of court were held in the home of Judge Wallace, just a mile and one-half east of Bentonville. Most of the county business was done here until the May term of court in 1838. At this time they moved all of the county records into Benton County's first courthouse, and held that term of the court there.

Judge Wallace as almost as big a man as was his job. He is said to have been almost seven feet tall, so everyone in the county had to look up to him. It would now be hard to say if the people saw things his way because of his size or because he was a much smarter man than most. But several people writing of the setting up of the county have said that it was done his way, for the most part.

One of the early acts was the holding of an election to select three commissioners to choose a site for the county seat. These Commissioners were Robert Cowen, Robert Weaver and Thomas Swaggerty.

On the 7th day of November, 1837, they filed with the county clerk a report of their proceeding to wit; in part,

We beg leave to report that we have selected a site to wit; the south half of the southeast quarter of Section 30, in Township 20           North, Range 30 West of the fifth principal meridian, as presenting to your commissioners, duly considering its situation, the                 donations offered, and its eligibility for a county seat.

At first there were but two roads across Benton County, one the Line Road running down the west side of the county through what later was the town of Maysville, Cherokee City and Silvan. This road was built by the Army and ran from Fort Smith, Arkansas to Fort Scott, Kansas.

​The other road was built by the State to take travelers across the county in a northeast route. It ran close to what is the Frisco Railroad track today. This route was used by cattle herders to take herds of cattle from Texas to St. Louis, Missouri, before the days of the railroads.

As more people came into the county, new roads were built and before long the whole county was crossed with roads, some of which could be used part of the year only. Many of them crossed creeks that could not be forded when the water was high, so one had to know a little about the roads when crossing the county.

It is said that several groups of Cherokee Indians crossed the county as they were moving from their old homes in Georgia and Tennessee to the Indian Territory. In the summer of 1838 one large group of Cherokees came into the county at about Gateway and moved along or near to the State Road through the county and on to Fayetteville. 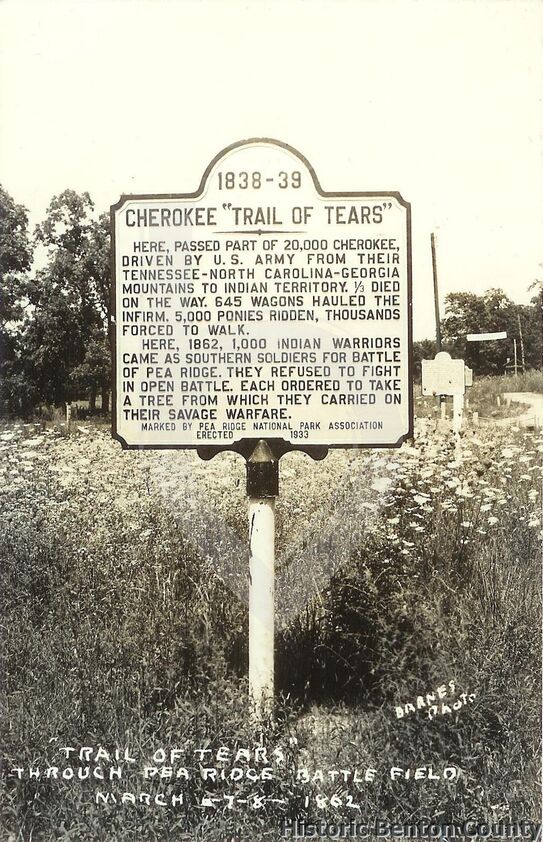 This is a historical marker identyfing that the "Trail of Tears" came through this area.
​​Records show that the first license for a ferry on the White River was issued to Abner Jenning, in January, 1857. This ferry crossed the river at Blackburn Mill Road. In October that year William Early was granted a license to run a ferry at the White River at the crossing of the Bentonville to Huntsville Road.

In 1840 Enoch Trott built a dramshop and general store along the State Road at where Brightwater later was. Other stage stops along this road were at Callahan Springs, Cross Hollows and Mudtown. The main business at these places was the sale of whiskey.

When the Butterfield Overland Mail came through Benton County they used the Springfield to Fayetteville Road. They made just one stop in the county, that was Callahan's Tavern. Their first trip got there on Saturday morning September 18, 1858. This stop was used until the line folded at the outbreak of the Civil War.

The road that Butterfield used later became known as Wire Road when a military telegraph line was erected in 1860, from Springfield, Missouri, to Fort Smith, Arkansas.

The Frisco Line was the first railroad in the county. They started building in 1880. By mid-1881 the road was across the county and the towns of Garfield, Avoca, Rogers, and Lowell were started.
​
In 1882, the Bentonville Railroad built track to Rogers so they could connect with the Frisco Line there. In 1898, it was extended to Grove, Oklahoma. 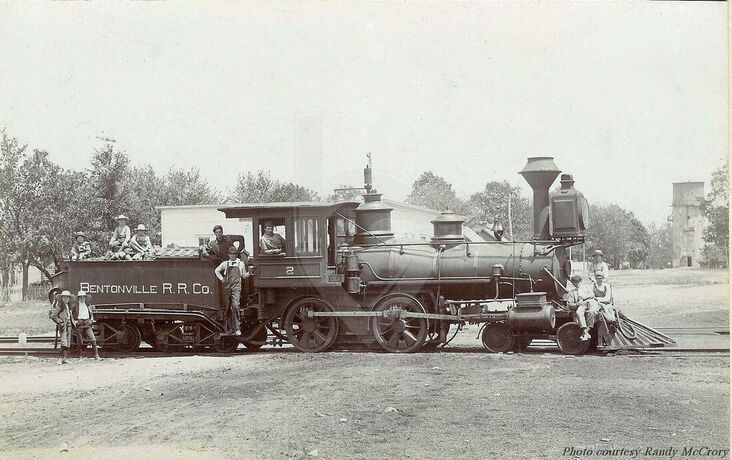 This photo shows the Bentonville Railroad Company train that ran between Rogers and Bentonville. Here the train is sitting in the middle of Walnut Street in Rogers. You can see the old Rogers water tower in the background.
The town of Hico was started in 1880, the name was changed to Siloam City in 1880, then to Siloam Springs. Sulphur Springs was platted in December, 1885, and Gravette was founded in 1894. It was just a short way from the old town of Nebo. Gentry was laid out in 1894. [Note: other information puts the founding of Hico at a much earlier date than stated here.]

Pea Ridge got its start somewhere about 1850, and Decatur about 1870. Several other towns started between 1895 and 1908. They would all grow fast for a few years, and then fade out.

The first Masonic Lodge in the county was organized at Hico in 1847.

Electric lights first came to Benton County in 1895 and Rural Free Delivery by the Post Office started in 1904. Motion pictures shown in Rogers at a carnival in 1906 were the first shown in the county.

Most of the early settlers coming into the county came looking for a new home. All they wanted was a place where they could raise their food and have a few cattle. For the most part they had very little money or education.

The few moneyed people who came into the county early were doctors, attorneys, or businessmen. Most of these, along with the few well-to-do farmers, were slave owners. There also were a few well-to-do Indians on the west side of the county who owned slaves.

After the Civil War, there was a change made because most of the people coming had more education. Many businessmen came in at this time.

The 1880 farm census showed wheat, Indian corn, tobacco, hops, hemp and flax being grown as cash crops in the county. Some cotton was also sold but most of what was grown in the county was used at home.

Tobacco was the first really big cash crop grown in the county. The tobacco grown in Benton County was a better grade than was grown in most other parts of the country at that time.
​
Tobacco was so important here that the 1880 U. S. Agricultural report carried two pages on the cost and quality of raising tobacco in Benton County.

Apples were the next large cash crop in the county. At the beginning of the Civil War, apples were being shipped out of the county by wagon loads. After the the war, the apple industry just kept growing, so that by the late 1880's, apples were King in Benton County. 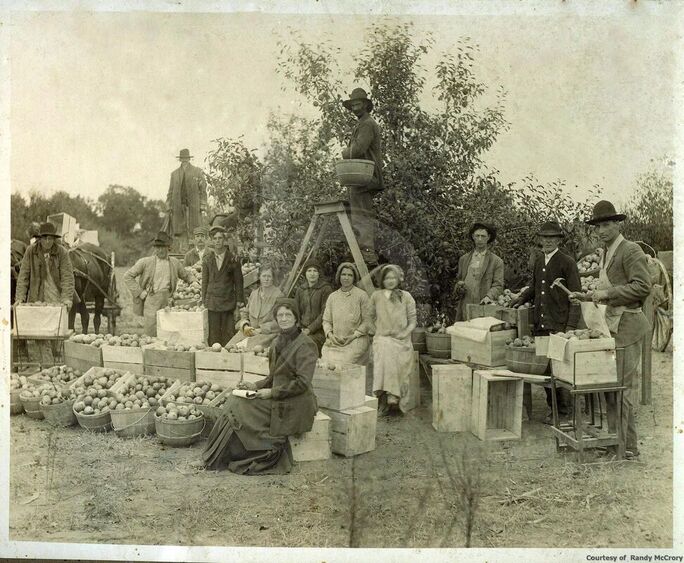 This is an image of the operation of an apple orchard in Northwest Arkansas in the early 1900's
Northwest Arkansas won real fame in 1904 at the World's Fair in St. Louis, Missouri when they captured all the major prizes offered in the horticultural division. In 1915 at the Panama Pacific Exposition in San Francisco, they won 308 prizes for their apples. Arkansas lost the grand sweepstakes because they didn't have their exhibit ready on the opening day. Most of these apples were from Benton County.

The apple industry faded out by the late 1930's and the farmers turned to milk cows, beef, and broiler raising.