Benton County Courthouse History
Building of New Structure Recalls Early Day Problems
Benton County Herald newspaper March 31, 1927
With the election of commissioners in charge of the erection of a new courthouse for  Benton county, to cost about $200,000, of plans for the new county building recalls the early history of the county, and the building of the present courthouse, which has served for the transaction of county business since 1874, and of the three county buildings which preceded it.

Benton county was settled before 1830 and its county organization was made in accordance with an act of the general assembly approved Sept. 30, 1836. The county organization was completed at the first session of the county court, which was held in the spring of 1837 at the home of the presiding judge, George P. Wallace, who lived about a mile and a half east of Bentonville. Interesting stories have come down to us of this pioneer judge, whose home was used for the organization of a county destined to become within a few years the mecca of the fine and cultured group of Tennesseans and Virginians, who in the early forties and fifties sought new homes in the wilderness of the west. Judge Wallace was a powerful man, almost seven feet in height, and had a large family of sons of equal stature and strength. It was said that, when Wallace built a house, it was not necessary to have the usual help of his neighbors to raise the structure, as he and his stalwart sons were equal to the task. After the organization of the county at the home of Judge Wallace, an election was held in accordance with the law creating the county, for the selection of commissioners to choose a site for the county seat, and Robert Cowen, Robert Weaver and Thomas Swaggerty were duly elected.
Town Site Chosen
On Nov. 7, 1837, the commissioners reported to the circuit court, that, "after duly considering the situation, donations offered, and its eligibility for a county seat" they had chosen the location of Bentonville, as having more advantages and conveniences than any other location, and had laid off a town, leaving a square and a 136 lots, and called the town Bentonville. In the proceedings of the court in November, 1837, the report of the commissioners is shown as approved by the court, and an order made that "writs and process hereafter issued by the court shall bear test and be made returnable at the courthouse in the town of Bentonville." In accordance with an order of the court, the session of the court of May 1838, was held in Bentonville, where regular sessions have been held since that time, except for the interruption occasioned by the war between the states.
Courthouse Built of Logs
The first courthouse, built in 1837, was a small building of hewed logs, such as might have been expected in pioneers days. It was located on the north side of the public square, probably so located because it was expected that a more permanent building would be built as soon as possible in the public square, the city of Bentonville being so designed by its builders that the square was left available for a courthouse building. At the present time, there are on the northside of the square, in the block where the first courthouse was located, a number of brick buildings, including the First State Bank, the Record building, the Jackson grocery, the Morgan variety store, and the Royal theatre. This temporary log courthouse was used only a few years, but, within it rough walls, much business of interest and benefit in the rapidly growing county was transacted by men whose names have an important place among those responsible for the growth and development of Northwest Arkansas. Here were appointed commissioners who laid out the county roads, here the early contracts for public improvements were made, and the state and county taxes were leveled. Though little record is left of the business conducted in this pioneer courthouse, we know that its affairs were in the hands of men of good sense and honestly, men who had learned the ways of state-building front their fathers in Tennessee and the Carolinas, and who brought with them from the older states a realization of the importance of honesty and efficiency in public affairs.
Log Building Replaced
The temporary log courthouse, used only two or three years, was replaced in 1840 by a two story brick structure in the public square, and used until destroyed by fire during the [Civil] war, when it is said that federal soldiers burned 36 buildings in Bentonville in retaliation for the death of a federal soldier who is said to have been shot by a southern sympathizer. The building was about 50 feet square, had a courtroom on the first floor and a jury room and offices for county official on the second floor. The size of this primitive building is in striking contrast to the size of the building now necessary for the transaction of the county's business.  John and William Walker, brother merchants of Bentonville in the days before the war, were the contractors and are said to have lost money on the construction of the building.

When the war was over and Benton County men returned to their devastated homes in a territory which had suffered cruelty during the war, they were confronted with the problem of building a structure in which to conduct the business of the county, and a temporary frame building costing about $1,000, a very large sum at that time, was erected on the north side of the square, near the old jail site, and this was used until the present courthouse was built. The frame building was was moved, on the completion of the courthouse to the county poor farm and was abandoned on the erection of the splendid "County Home" which now houses the unfortunates of the county.
New Courthouse Ordered
On Jan. 4, 1870 the Benton county court, with J. McPherson presiding, the court at that time having a county judge and two associate justices, made an order for the erection of a courthouse in Bentonville, and William W. Reynolds was appointed commissioner of public buildings. The commissioner, at the order of the court, selected and purchased a "proper piece of ground" lots 90, 91, 94, and 95, from  the Joseph R. Rutherford estate and reported that the lots could have been purchased in "green-backs" for $1,000, but from the fact that payment would be made in county warrants that $1,250 was agreed upon as a fair price. It is interesting to note that the commissioner reported the purchase consummated and presented the deeds on the same day that he was appointed, that the purchase was approved at once, and county warrants for the purchase price and in such denominations as might be desired. At the succeeding term of court, Commissioner Reynolds submitted plans for a courthouse and jail, drawn by W. T. Ritter, an architect of Springfield, Mo., with an estimated cost of $35,000. After giving notice of 20 days, bids were opened May 1, 1871, in the presence of the court, the bidders including J. H. Neely and Samuel H. Kelton, of Bentonville, A. H. Leady, of Springfield, M. A. Bowles, of Illinois, W. T. Ritter and company of Springfield , and J. Oliver of Springfield. The bids ranged from $31,910 to $36,575, and the contract was awarded to Neely and Kelton for $33,000, who made bond for $66,000. 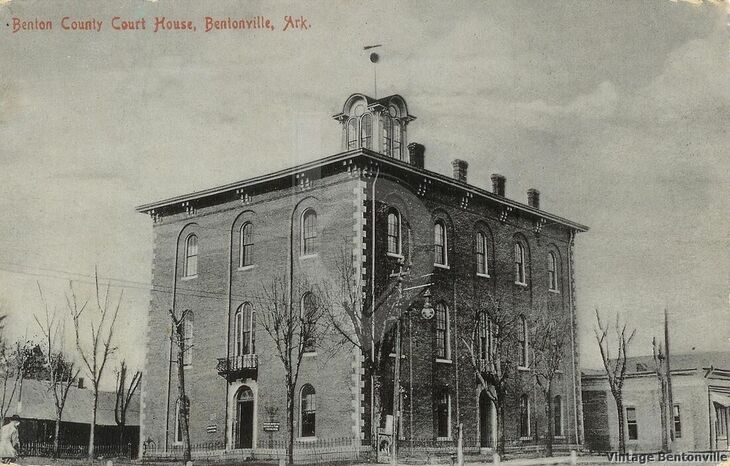 This is an image of the Benton County Courthouse that was built in 1872 at an estimated cost of $60,000.
Taxes Were Next
The period during which the courthouse was built was one of suffering and privation in the county, when the people were weighed down with taxes which they almost had no means of raising, and in studying the finances of the time, it seems remarkable that the courthouse was undertaken at all or that the completion was accomplished. Bonds not to exceed $30,000 were made payable at the rate of $10,000 each year, until the cost should be paid or the debt exhausted, all bonds to bear 10 percent interest. After the sale of the first $10,000, petitions were present to the court asking the court to dispense with the bond issue and to levy a cash tax for financing the courthouse and jail, on the plea that the interest-bearing bonds could not be sold except at such rates as were a ruinous sacrifice to the people. However, the contractors refused to make any change from bonds, contending that they could not use script nor wait for money collected by a direct tax. In 1872, after the sale of the second issue of $10,000, the deplorable condition of finances in the county, as shown by efforts to sell the bonds at public outcry, caused arrangements to be made to turn over the remaining bonds of $30,000 over to the contractors who had negotiated their sale to Lenton D. Starke, a Fayetteville banker, at a price which would provide enough money to complete the building. Though a bend was made by the contractors for the delivery of the bonds to the purchaser, the negotiations with Starke were not completed, and the bonds were returned and burned in the presence of the court. Three hundred interest-bearing bonds of $100 each then were offered for sale in sufficient numbers to raise $5,075.75 less 10 percent on said sum in currency. It was ordered that these bonds should bring five cents on the dollar and should be sold one at a time at the courthouse door for cash to the highest bidder commencing June 1, 1872, and to continue each day until the full amount was sold. A month later the commissioner reported that the bonds were offered for sale as ordered, but that one bond was sold, that one being purchased by. C. H. Davis for $75.05. The other bonds were sold to the contractors for 75 cents on the dollar. On Sept. 1, 1872, the courthouse not being completed, as required by the contract, the contract was ordered forfeited, and a few months later Commissioner Reynolds resigned and was succeeded by S. C Elliott. In April 1873, the court ordered 46 one hundred dollar interested-bearing bonds issued, to be sold by private sale at a price not lower than 75 cents on the dollar, or, if that could not be done, at auction for cash. If unable to secure money by the sale of these bonds the commissioner was to pay workmen for labor on the courthouse with the bonds at such discount as he judged fair to the county. 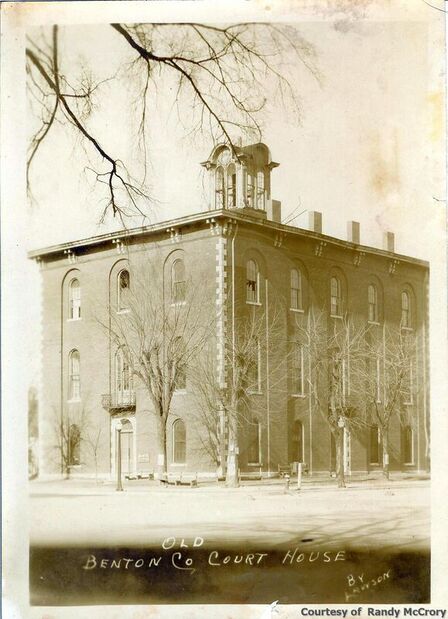 Cost Was Large
In June, 1873, contacts were made for the completion of the courthouse, the contracts for the necessary woodwork, tin-roofing, brick, stone, and plaster-work totaling about $1800. In July, 1874, the courthouse was completed, and County Treasurer W. C. LeFors made a report of the bonds and courthouse warrants and coupons that had come into his hands as treasurer. On account of the interest and discount on the bonds sold and the low value of county script, it is said that the old courthouse must have cost $60,000, but its exact cost to the county is not known. It served its purpose well for many years, and is rich in interesting and historic associations. In view of the difficulties attending the financing of it, the old building is a monument of the persistence and public spirit of the people of the county.