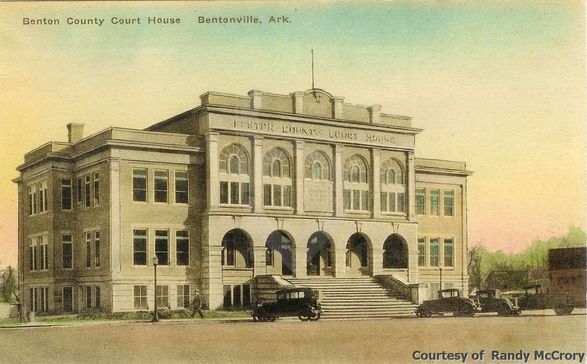 In 1928, the county started building a new courthouse, its fifth, which is still used today. The building was designed by local architect A. O. Clark. It is built of buff brick and limestone and is of a Neo- Classical style. The projected cost of the building was $200,000 plus an additional $10,000 for furniture.

The materials included 30 train car loads of bricks, 12 cars of cut stones, 40 cars of crushed stone, 4 cars of each for lumber and steel, 12 cars of cement, and 16 cars of sand. For the base of the building and the window caps, six car loads of Carthage white lime were used. In total, the materials used would fill up to 110 train freight cars.

In April 1928, the contractor notified the judge that the cornerstone would soon be ready to be set. It had long been a custom with Masonic lodges to lay the cornerstone of important buildings, so the judge allowed the Masons to have a ceremony.  The laying of the cornerstone was held at 2:30 on April 11, 1928, and the ceremony brought a large crowd to town. It’s said there were 4,000 to 5,000 people in attendance. Masons from the 17 Masonic lodges in Benton County came as well as members of lodges from surrounding states. Placed in the cornerstone were a copy of the Bentonville County Herald from Feb, 23, 1928, a detailed account of the new courthouse, the layout of the interior, and a record of all local and state officials, commissioners, architects, and contractors involved in the project. There was also an April 1928 copy of Confederate Veterans. A Stone Mountain half dollar was presented by A. J. Bates, and a Bible was presented by Jeff Rice, mayor of Bentonville, which were also placed in the cornerstone.

Above the main entrance of the building reads “Sovereignty Rests With the People”. The main floor of the building was designed to sit 8’ above the exterior sidewalk, and a grand stairway of Carthage marble leads up to the first floor. There are 36 rooms inside the courthouse spread over three floors, which includes the basement. The first floor of the court house housed the collector’s office, treasurer's office, county vault, county superintendent of schools, health, and offices. The second story had the circuit court which included galleries on the back and sides of the courtroom. The main floor of the courtroom seated 400 people and the galleries an additional 600. The building was fireproof and the only wood used in its construction was for the doors. Once the building was completed, it was dedicated on November 12, 1928. The main speaker for the day was Judge W. A. Dickson. 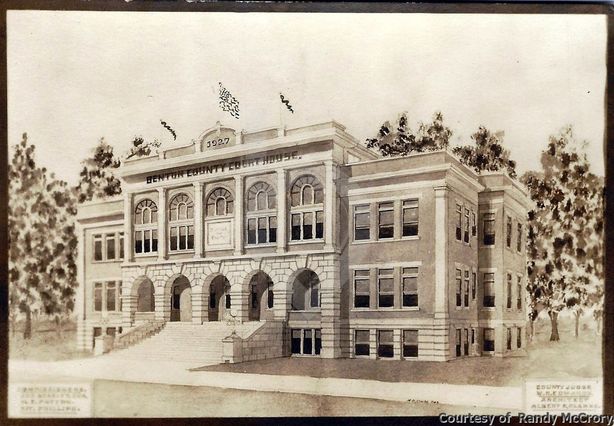 This isn't a postcard but rather an architectural rendition of what the county courthouse should look like when it was completed. In the left corner, it gives the names of the engineers. Patton and Phillips are two of the names included, but the others are hard to decipher. In the right corner it reads,  "County Judge W. R. Edwards, Architect Albert O. Clarke". Notice the date at the peak of the courthouse in this image is 1927, while on the courthouse itself it is 1928. The back of card reads: "Compliments of Albert O. Clarke, Architect"