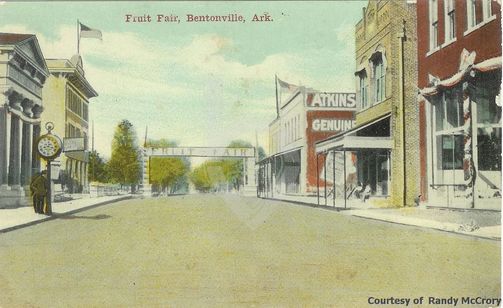 ​Bentonville was not the first city in the county to have a Benton County Fair. The first fair was held in Rogers in 1896, and the last fair  held in Rogers was in 1906. Sadly, the Rogers fair never made any money.

In 1902, Bentonville held its first fruit fair on Oct. 28 – 30. It was sponsored by the Benton County Horticulture Society. It was to carry the name “Fruit Fair” for quite a number of years, and then eventually became the Benton County Fair. The cost of the fair was free, and no fees were charged for entering exhibits at that time. Many of the exhibits were housed in the court house with others in vacant buildings around the square. The third floor of the courthouse was used as a women’s and children’s area. Here they would show their plants, flowers, and art work. The men were urged to keep their best fruit and produce to be judged at the fair. Women likewise were asked to bring their best canned fruits, art, and fancy work to the fair. The cattle were shown in a vacant lot east of the square. There were carnival rides, and tents were set up in the square or on side streets. There was also a merry go round and a moving picture show that first year. Ever since the first year, carnival rides have been part of the fair.

In the 1930’s, the beauty pageant was added to the fair. It is still a mainstay of the fair today. Even in the middle of the dust bowl in 1934 they had a good turnout. One year in the 1930's, the Plaza Theatre had free kids' shows on the Friday of the fair.

1939 was the last year the fair was held on the square, and that year they added a race track for horse racing. In 1940, the fair was moved to a bigger location. Many people said when the fair was moved from the square to the fairgrounds it lost a lot of its flavor. The same thing is often said today about the current fairground. In 1946, the schools started to let students out of school for one day so they could attend the fair. Children could be involved in bicycle races, foot races, and sack races. In 1948, the first Benton County Fair parade was held. The parade has traditionally been held on Saturday morning of the week the fair.

The Benton County Fair is now held annually at the new fairground located on Highway 12 near Vaughn. The former fairgrounds on south Main Street in Bentonville is now the site of Thaden School, a private school that will serve students in grades 6-12 upon its completion. 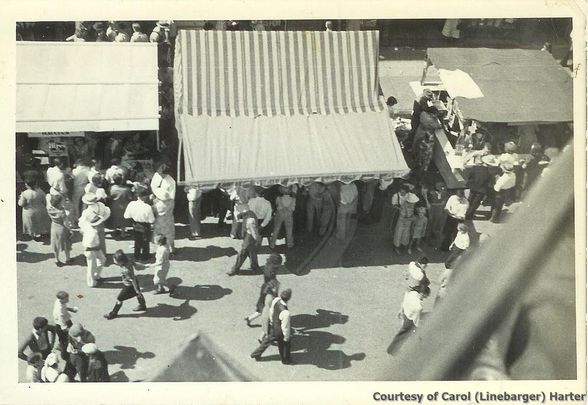 Above are images of the Bentonville Fruit Fair from 1939