Benton County Hardware Big Business Back In The Day

Benton County Hardware Big Business Back In The Day
The story of Benton County Hardware is a remarkable story of two young men, Connelly Harrington and W. J. Doke. They arrived in Benton County from Plattsburg, Mo. about 1900. They came first to Bentonville and purchased the stock of a bankrupt hardware business. They first established their business in what is now Bloomhill Hair (formerly Hilton Automovite Supply.) Later the business would move to 114 W. Central. Their story is told as follows by the Benton County Democrat:

"When these men, Connelly Harrington and W.J. Doke, came here, people little thought that they would be the nucleus from which would spring one of the biggest commercial enterprises of the southwest.

"They began in a small way and opened up the Benton County Hardware Company, a small store at Bentonville. Through their sagacity and enterprise, the business began to grow until now it extends over three states, the largest hardware and implement house in Northwest Arkansas and in fact, in this section of the country. 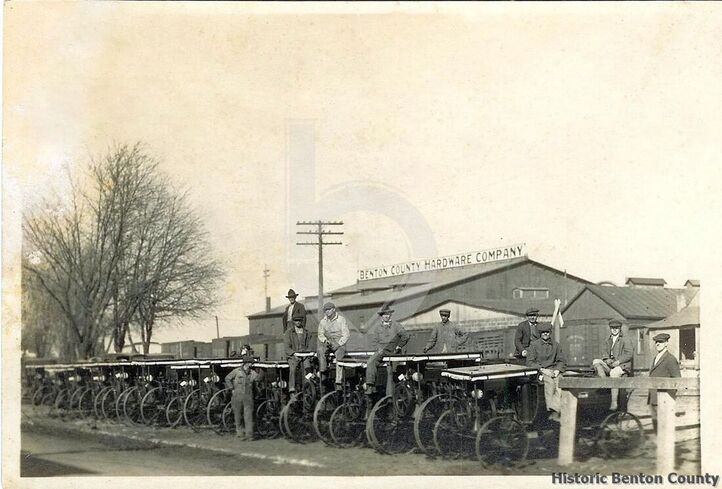 This is a postcard  with the ​Benton County Hardware Company warehouse in the background.
​In the foreground are orchard sprayers that were purchased by the company to be sold.
"One year after the modest plant of Benton County Hardware company opened for business in Bentonville, the business began to expand and a store was opened in Siloam Springs. In 1909 the company purchased the Rogers Hardware Company's store in Rogers [not to be confused with a later Rogers Hardware Store that was located on Walnut Street.]

"Not a year has passed but what these two men have continued the same excellent business policy and an exceedingly rapid growth has been the result..."

The company also had this territory for International Harvester which was big business for the company. Farm wagons were in high demand at this time and the hardware store sold hundreds of them.

The company was also the general Ford distributor in this territory. Both Rogers and Bentonville had dealerships and garages. In January 1921 the Ford building of Benton County Hardware in Bentonville burned to the ground. The fire also consumed three other buildings and took one fireman's life. The total losses were $100,000, and they only had insurance on about one-third of the contents. 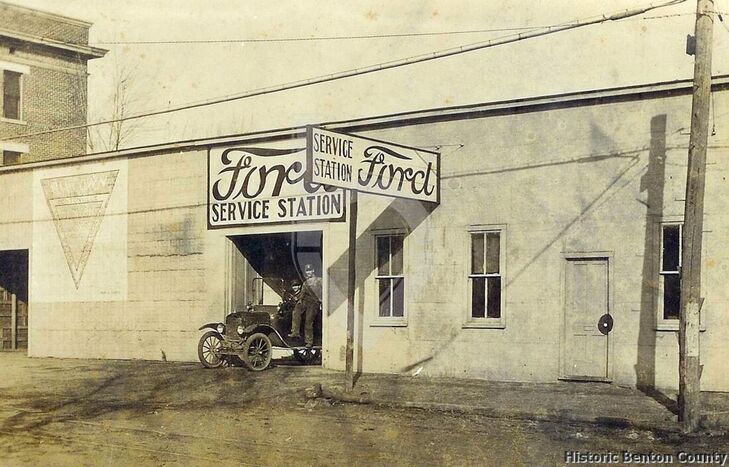 This would be the Ford garage that sat right behind the Massey Hotel. This was also the first gas station in Bentonville. They had buried a 500 gallon tank beside the garage in the alley which would be filled by 50 gallon drums brought from Rogers.
​At one time the company owned controlling interest in 12 other hardware stores other than those in Benton County.

In the 1920s, inflation caught the hardware comapny with a full stock of inventory. They were having to sell products at half of what they paid for them, taking a great loss in their inventory. The final straw for the company was with the failure of the Rogers and Bentonville banks in 1930, which threw the company into bankruptcy and ultimately only paid out cents on the dollar to their shareholders. 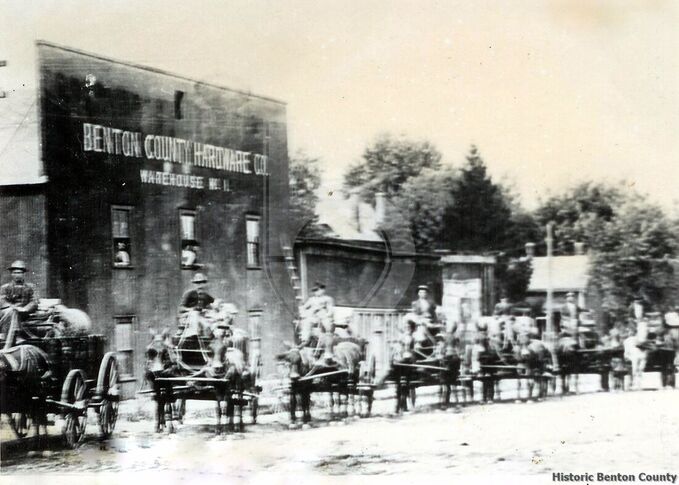