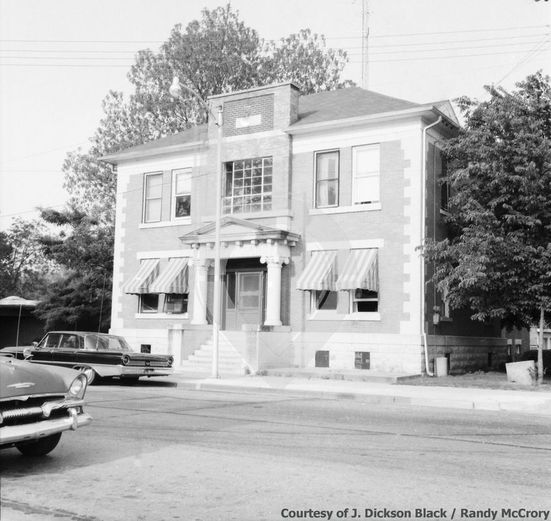 ​Even before the first courthouse was built, it is believed that the county built a jail by 1838. The first jail was located about sixty yards east of the northeast corner of the square in Bentonville. It was a small building consisting of double walls of square logs. Between the log walls, there were poles creating a kind of third wall.

In 1848, the first jail was experiencing some condition issues and was deemed to be unfixable. A new structure was built near the same location. By 1860, there was talk of replacing this jail. The new jail was to be built 40 feet long by 22 feet wide, from outside wall to outside wall. The walls of the first floor of the jail were to be 18’ thick and 9’ tall. The second floor was to have 11’ tall walls, and the structure was to be set on a solid stone foundation. A contract was given to build the jail for $3475, but it was political campaign season, and after the elections were held the jail was never built.

In 1874, the county jail was moved to the third floor on the then-new Benton County courthouse which was located at the northwest corner of the square. Then in 1888, they started building a new jail due north of the courthouse facing N.W. Third, where the Neighborhood Market is now. Contracts were given to a least 6 different contractors to finish different parts of the jail. The building was budgeted at $7500. This jail was one story tall and measured 42 feet long by 32 feet wide from the outside corners. It had two 6 1/2 foot cells for prisoners. There was a hall that extended around the outer walls of the building, designed so there was no access to the outer walls by the prisoners, and the jailer had almost no contact with the prisoners.

On March 4, 1905, a fire broke out in the jail. There were six prisoners in the jail at the time, four of whom survived the fire. The two inmates who passed away were Dan Reaves and Henry Crow who were sharing the same jail cell at the time of the fire. Reaves was serving time for petty larceny and was about to be released. Crow had earlier been arrested on insanity charges, but had gotten better and had been released. He was given a half dollar by the sheriff and told to go home. Instead, he went to the local hardware store and bought files and distributed them to the inmates in the jail, which put him back behind bars with a $100 fine. It appears one of the prisoners accidently set bedding on fire with a match, pipe, or cigarette. It was said that Crow was so terrified that he grabbed hold of Reaves, preventing him from trying to put out the fire. Neither the sheriff nor the jailer lived very close to the jail, so it took some time for them to get there. Rescuers broke out a window to let the smoke out of the jail, which probably saved the lives of the other inmates. Firemen were finally able to put out the fire, but by that time it was too late for Crow and Reaves. Neither body was badly burned but apparently both of them had been overcome by smoke from the fire. A lawsuit brought by the families against the jailer and the sheriff was dismissed. After this incident, policy was changed to require the jailer to live at the jail to prevent something like this from happening again.

A temporary jail was used until a more permanent jail could be built. In 1911, a new jail was completed. It is located just one block north of the Bentonville square on Main Street where it still stands today. The building is a two story brick building with cut stones. The building was done in a neo-classic style at a cost of $11,200. Upstairs there were six cell blocks which would hold four prisoners each. The jail also provided for rooms for the jailer and his family, jailer’s office, kitchen, and a women’s ward. The sheriff’s office was also located here. This served as the county jail until 1975 when they added a jail to the back of the county courthouse on the east side of the square. The current county jail was completed in 1999 on Highway 102 West. 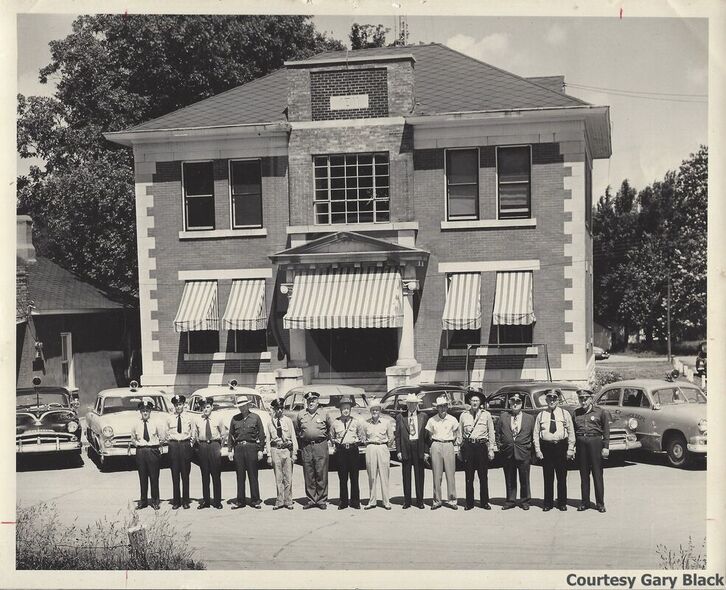