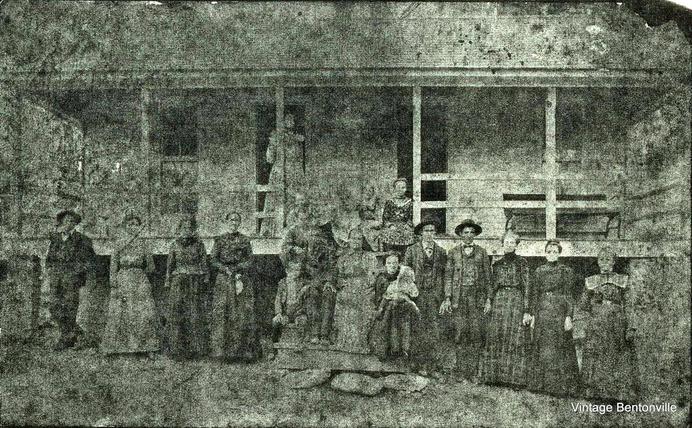 In April of 1857, the court found it necessary to establish a poorhouse in Benton County. A commision was formed to find a location for the county poorhouse. A sum of $1200 was set aside for the purchase of the property when a suitable location was found. In January of 1958, the commision reported that a 45 acre site had been found just north of Bentonville. The property had a spring, a log cabin (without floor), 10 cultivated acres, and 4 acres in wheat. This land was purchased for $300 from William Clements and a survey of the property was done. The county then built the other necessary buildings on the property and moved the paupers of the county to the farm, placing them under the care of a superintendent.

From this point until 1875, we have little or no record of the poor farm. We have no idea what happened to the farm during the Civil War. After the Civil War, the county built a temporary courthouse just north of the Bentonville square which was used until a more permanent one could be completed. When the new courthouse was completed in 1875, the temporary courthouse building was removed and resituated on the poor farm. The building was disassembled and reassembled on the the property by William Stewart and J, V. Lee at a cost of $330. An additional $120.50 was given to James Haney to be used for fitting the building out.  The poor farm housed an average of about 8 to 10 people at a time. It went by several other names, including the poorhouse, or the pauper's farm. In 1907, a special act of the general assembly changed the name to the Benton County Home. The people who lived at the poor farm were called inmates or paupers, which were common terms for the poor at the time. 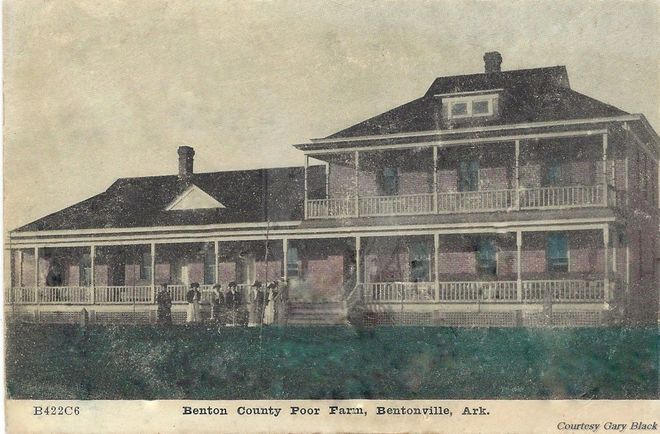 In November of 1905, the Benton County Home was moved to a new location about where the Benton County Services building is located on Highway 102 West. The inmates were taken care of by a contract that provided a set amount day per inmate. In 1906, W. R. Ford was awarded a contract for 30 cents a day, which was intended to also provide board, clothing, and medical treatment. The lowest bid, which wasn't accepted, had been 15 cents. The contract system left the inmates at the mercy of the contractor, so the system was later abandoned, and a superintendent was hired for the county home. The County Home was open till the 1940s or 1950s when other facilities took its place.
We have little information on most of the inmates at the Benton County Home, but there is an obituary that is believed to be for the black woman in the photo to the right. The following is from the The Huntsville Democrat in June 1900: "Aunt Frankie - We have been informed that 'Aunt Frankie,' the old negro woman who had been taken from this place to the poor farm a few months ago, died recently. Her remains were interred at the burying ground on the poor farm. It will be remembered by the people of Huntsville that Aunt Frankie's daughter Bettie died here with cancer several years ago and that she was buried in the Huntsville cemetery. It will also be remembered by many that Aunt Frankie, who was much respected by everyone who knew her, had a great desire to be buried by the side of her daughter, and we heard one of our businessmen say that if the people of Huntsville had been notified of her death enough money would have been raised here by popular subscription to have defrayed the cost of her burial by her daughter. As we have stated before, this old negro's exact age was not known but she was evidently considerably more that 100 years old and had lived in and near Huntsville since many years before the Civil War."