Benton County Was Site of 16 Civil War Camps
By J. Dickson Black. The Benton County Democrat, February 25, 1976, now the NWA Democrat Gazette
During the Civil War there were many small army camps in Benton County. They were all started by the Confederate Army but most were also used by the Union Army before the war was over. None of them were very big as we think of army camps today.

Camp Walker
This camp was established by Gen. Nicholas Bart Pearce, a Benton County man who had been a West Pointer, and the first Brig. Gen. in Western Arkansas. The camp was located 1 1/2 miles northeast of Maysville. It was named for a member of President Davis' cabinet. It was at Camp Walker that soldiers from Arkansas, Missouri and the Indian Territory trained before the Battle of Wilson Creek and again after they returned from the battle. Troops from Texas and Louisiana were also stationed there at various times.

Camp Jackson​
Camp Jackson was located four miles east of Maysville, or about two miles from Camp Walker, on the 520 acre plot that had been occupied by the Harmonial Vegeterian Society. It was at Camp Jackson that the 4th Ark. Reg., 3rd Louisiana , McRea's, Good's, and Reid's regiments were established on Sept. 5, 1861. The left Oct. 12.

Camp Stephens
This camp was named for Alexander H. Stephens and was established in July 1861, by the 3rd Louisiana troops. It was located on Sugar Creek, east of the old Robbins farm and reached below the Kinley place. Headquarters for the officers were on Brush Creek. By the old road at that time, the camp was about seven miles northeast of Bentonville. This was where the first mail skirmish was fought with Gen. Sigel, when he was forced from Bentonville on March 6, by Confederate troops.

Camp McCulloch
This Confederate Camp was established by Gen. McCulloch's forces in July 1861 and was located on the farms that were occupied by the Wallace and Black families, just one mile northeast of the Bentonville square.  On Oct. 27, 1861, this camp was occupied by the Fourth Arkansas Regiment, and according to Dr. Gammage, it was here that by eating good beef and plenty of red apples, the sick of the regiment were throughly recovered in a few weeks.
​
Camp Cross Hollows
This camp was south and east of Rogers at the cross roads where the east ravine leads to Monte Ne. At one time is was thought to be the best place for a battle because of its strategic position. The buildings for the soldiers had been built in a 24 X24 foot floor plan with a fireplace through the center. This is where part of the Confederate Army spent the winter months before the battle of Pea Ridge. When forced to retreat by the Union Army under Gen. Curtis, most of the camp was burned. Its remains were used by the Union Army for some time after that.

Camp Benjamin
This camp was two miles east of Camp Cross Hollows. It was established by the Fourth Arkansas Regiment under Gen. McNair, and the Third Louisiana Regiment under Gen. Hebert. It was occupied on Nov. 29, 1861, and was used by the Confederates until they were forced to retreat by the Union Army in February of 1862.

They had several buildings here because the soldiers were able to get lumber at a nearby sawmill.

Camp at Smith's Mill
This was the home of Gen. Nicholas Bart Pearce. He and his father-in-law were running a store, post office, and mill here before the war started. The mill was used by both armies during the war. 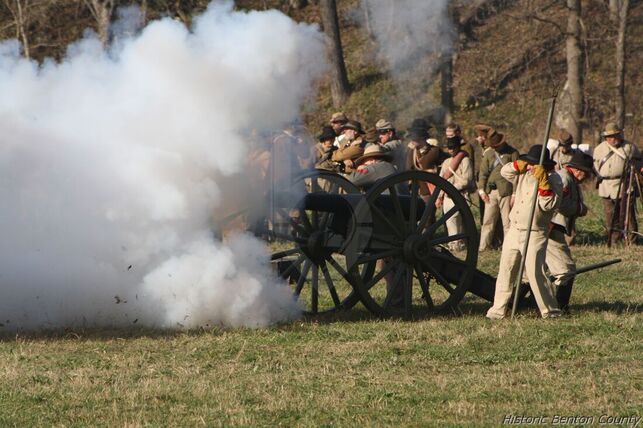 Camp at Osage Prairie
This was headquarters for the Fourth ArkansasRegiment when they first came into Benton County. It was about 2 1/2 miles southeast of Bentonville and was used as an enlistment center.

Walnut Springs Camp
The camp was about 2 1/2 miles northeast of Cave Springs, where the Tom Vickery farm was later located. It was a common camp ground for both armies because of good nearby springs. It was here in 1863 that five Union soldiers were killed by enraged citizens who claimed they had been terrorized by the soldiers.

Camp on Lindsey's Prairie
This camp was between Siloam Springs and Flint Creek. Soldiers were trained here during much of the war and several skirmishes were fought here and along the old line road north of Siloam Springs.

McKissick's Farm Camp
This was a very large farm south and east of Centerton and both armies camped there at various times. Gen Sigel was camped here when he was ordered back to Sugar Creek by Gen. Curtis, the day before the battle of Pea Ridge.

​Camp Bentonville
Many Confederate troops were stationed here before Bentonville was captured at 12:20 on Feb. 18, 1862. After the battle of Pea Ridge, Dr. Gammage moved several of the wounded from that battle to Bentonville, where a Dr. Moore cared for them. Many of them were cared for in the jail. The Union Army camped along the Town Branch.

Camp at Elk Horn Tavern
Soldiers camped here all during the war. First it was occupied by Confederates, then by the Union Army after the battle of Pea Ridge until April. Later Gen. Blunt camped here before the battle of Maysville.

Camp at War Eagle Mill
Both armies camped here to use the mill to grind grains for their troops. Early in 1862 the mill was burned by the Confederates to stop the Union from using it.

Camp Mud Town
This camp was much used by both armies. It was just east of where Lowell is today, and the headquarters was the old stage stop. 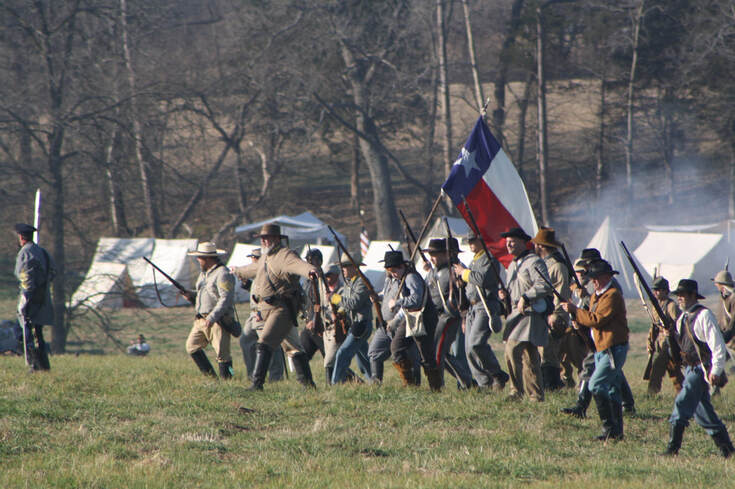