Bentonville : Remember the Past to Plan for The Future

Bentonville: Remember the past to plan for the future (excerpt)
By Sonja Reynolds - 1986 Daily Democrat Sesquicentennial Edition, now NWA Democrat Gazette
They sauntered around the square, greeting neighbors and admiring fashions. Children played, encouraged their frogs to jump the farthest. And music ranug out.

The first week of May - this time for the second year - Bentonville residents turned out on the city streets to celebrate their heritage. During Sugar Creeks Days, an annual Bentonville/Bella Vista Chamber of Commerce three day festivial, they mingled the times.

Yet some say the mingle should go much further - that Bentonville should remember the past in planning for the future.

While one longtime resident, Charlie Craig, says that tourism has had a major impact on the city, another says tourism must be expanded.

"We've never really gotten a hold on that and developed it in a manner that would improve the whole area. "Says Sid McCollum, Bentonville attorney and civic leader. " I'm not advocating Bentonville becoming something like Branson Mo., ) but there is certainly a lot of opportunity here.'

​"Bentonville didn't go after the industry ," says Craig, whose grandfather built the first two-story house in Bentonville. "Due to the influence of the Linebargers - they made us more conscious of tourism and I'm glad . . . I don't know why there isn't more emphasis on it."

​About 1916, the Linebarger brothers expanded a summer resort at Bella Vsta started in 1915  by the Rev. William S. Baker. The resort was later sold to E. L. Keith and finally in 1963 to John A. Cooper Sr. 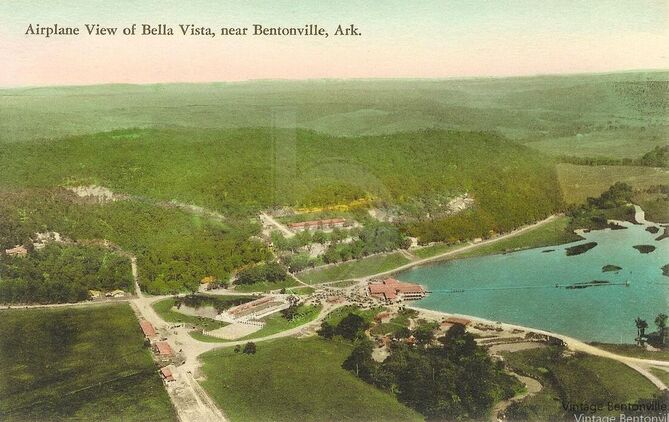 A view of Bella Vista resort taken in the 1920s
​Craig: Thoughts of time past
Craig says what began to change the face of the community was paving the highways and, in 1929, the square.

But the changes were not dramatic. They just eased in, Craig says.

"I can't remember when (kids) stopped shootinging marbles, "he says. "They don't do that anymore.

"Things really changed with the advent of blacktops, " he says. 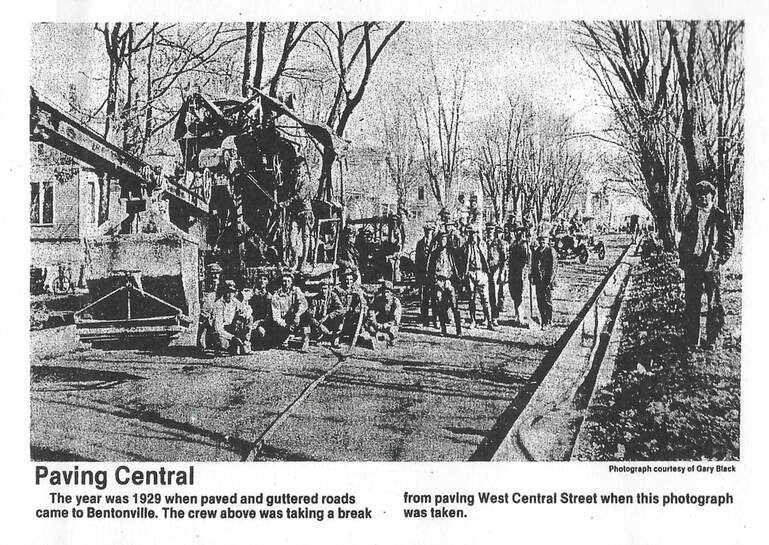 Bentonville, which was established in 1837, was a city of recreation as well as hard work. Craig, 82, says the most significant thing that happened to Bentonville was the development of Bella Vista. Economically, its impact is followed by Wal-Mart Stores Inc., tourism and the once thriving apple industry, he says.

When Craig was a boy, the courthouse was where the Phillips Food Store parking lot is now. At the site of the currrent courthouse was an outdoor theater. There was also an opera house where the Bank of Bentonville is today.

A Chatauqua tent set up often on the grounds now inhabited by the old Post Office building. There were traveling speakers and entertainers of all kinds - and there were tent shows.

Entertainment in Bentonville did not stop there. Concerts were held on Saturday nights on the town square. The 142nd Field Artillery Band played frequently after returning from World War I in 1918.

"There was also a theater where Black's Ready-to-Wear is, " Craig says, "Silent picture shows. They had a piano, a violin and clarinet play."

And in 1944 there was yet another theater, the Cosey, where Piper's Parlor is today on the square.

But movies, music and plays were not the only activities of the community. Baseball had its moment here , too.

In 1948, the Bentonville Blues, a semi-pro team, played at a site later to become Melvin Ford Park. Craig purchased the property which had been used for a horse racing track and turned it into a ball park. The team played 40 games and won 37.

Some of the players went on to the major leagues, he says.

After the one year, Craig disbanded the team and sold the park to the city.

By 1918 the apple business in the area was immense. The roads were not yet paved and the apple were shipped by railroad. 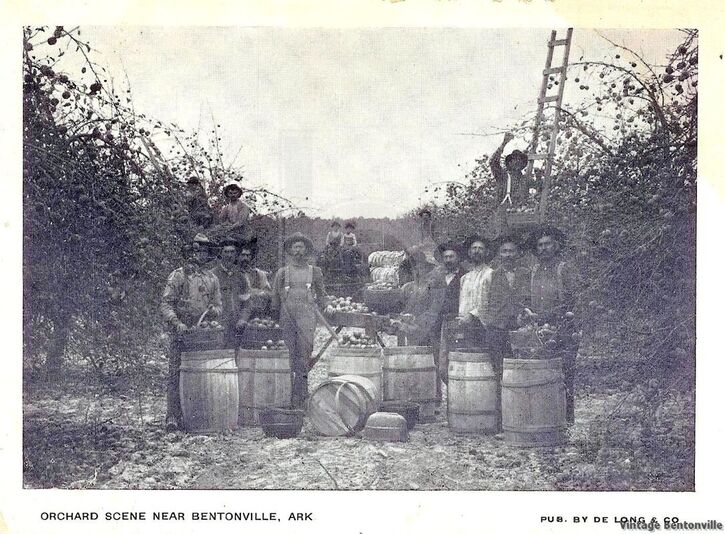 "There were orchards everywhere in those days, Criag says. "There were three grades of apples. No. 1, perfect; No. 2, commercial; and No. 3, culls, those that had two or more bad places on them. They went to the vinegar factory or drying sheds in Rogers."

In 1918, Craig, a sophomore in high school, was taken out of school to screen apples.

"That was when all the men had gone to war," he says. "There was no one to work the orchards except old men, boys and women. The apples had to be graded - screened."

​"He paid me every night in $1 bills," Craig says
McCollum: Onward
Through the years, the apple orchards failed and the town lost its theaters. Industry did begin to grow, but it is tourism that some say should become the focus.

"I think that's one of those things that will pass us by," McCollum says - unless there is a concentrated effort of planning.

I think things like Sugar Creek Days are a real good beginning. The first time in (1985) showed people what they could do if they worked. But I feel like if we don't start bringing in more people from out of town that project will burn itself out." 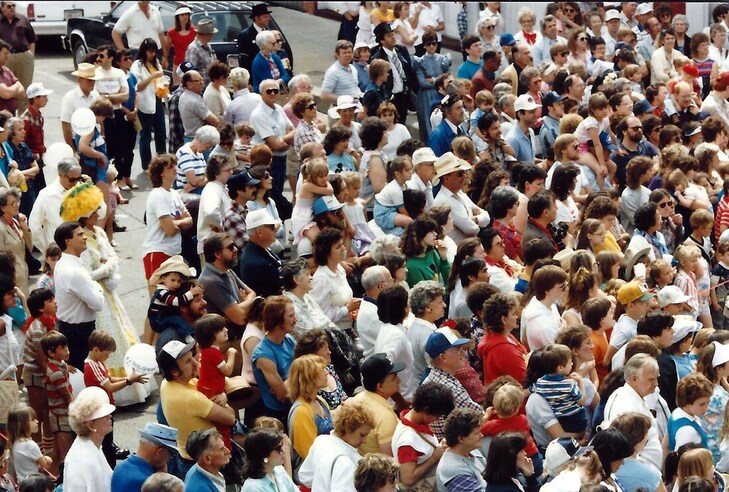 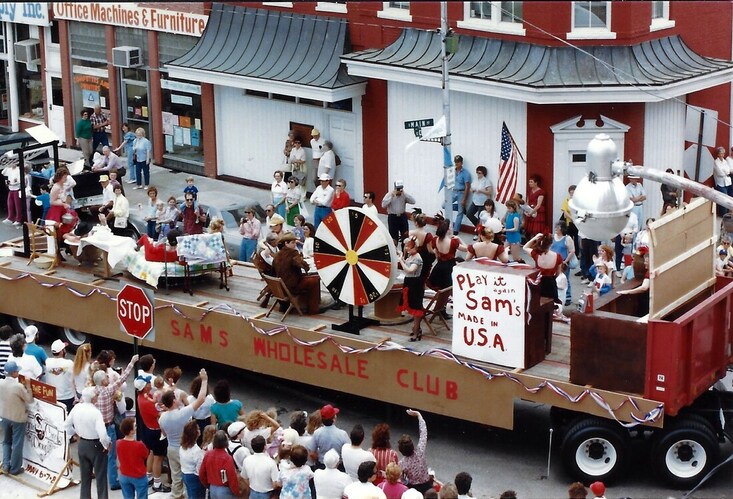 He suggests that Benton County communities should combine and use their total resources to develop tourism.

"In order to do that, individual jealousy between communities and businesses has to be set aside," he says. " I don't think we can remain too provincial. When we do our planning we have to look at the whole area."

Historically, communities have operated within boundaries - something that McCollum believes will have to change.

"We need to think areas and similarities between people and lifestyles and not worry so much about jurisdiction," he says.

And to keep Bentonville moving on the right track, McCullom says attitudes will have to become more "what can be done for the whole rather than the individual."