Bentonville 100 Years Old On November 7, 1937
Article from The Journal-Advance (Gentry, AR)  September 30, 1937
C. A. Linebarger, Jr. attorney of Bentonville, according to an article in the Benton County Democrat of last week, has unearthed the fact that Bentonville will be 100 years old November 7, 1937. According to a transcript furnished by the young attorney from page 3 of Record Book A the recording of the founding of the town reads as follows.

"We, the undersigned commissioners, elected under an act of the General Assembly of the State of Arkansas, after having been duly qualified and giving the notice required by law, and having duly examined the various situations, donations and conveniences, beg leave to report we have selected a site (to-wit)

"The south half of the southeast quarter of section 30, in township No. 20, range30, west of the Fifth Principal meridian;

"And presenting to your commissioner duly considering its situation, the donation offered and its eligibility for a county seat, more advantages and conveniences than any other situation which was presented for the consideration of your commissioners, they have after selecting the same in accordance with the power vested in them as commissioners, proceeded to lay off a town thereon, having a square and making 136 lots, and have named and called said town, Bentonville, all of which is respectfully submitted to the court.

If Bentonville is awake to the possibilities of this centennial date the Chanber of Commerence and other Civic bodies will put on a celebration such as Arkansas has not known before. 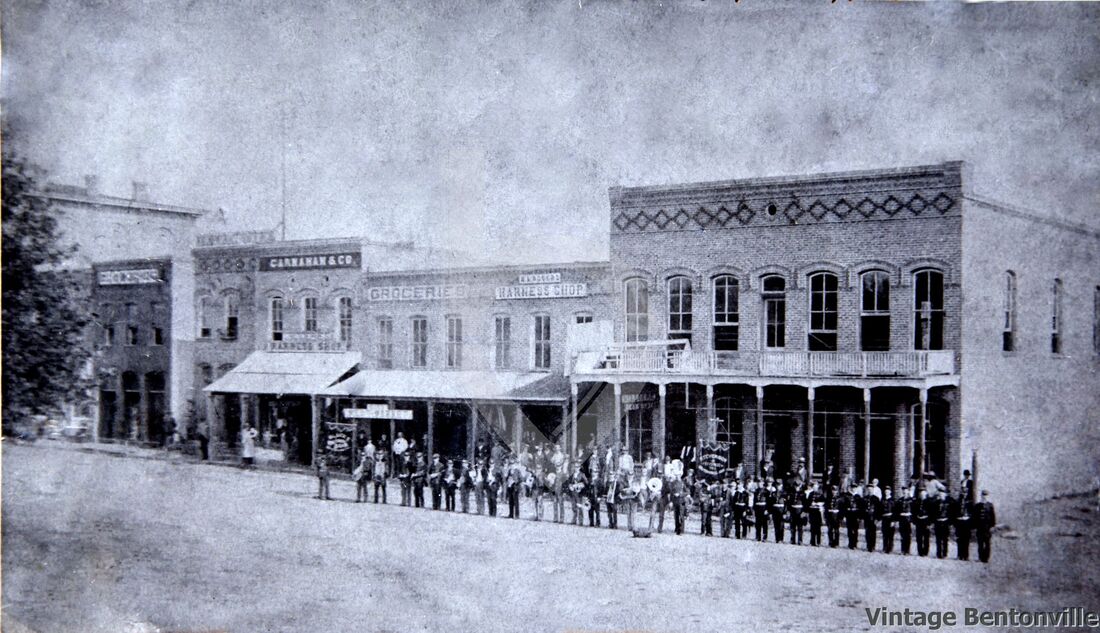 Early view of the north side of the bentonville square. Should in front is Stevenson Hose Company & Blacks Military Band - Bentonville, Arkansas