In March 1894, a meeting was held by people and groups interested in starting an Academy (College) in Bentonville. It was to be established as a non-sectarian school for both men and women. The money to start the school was paid by local lodges and subscriptions, and the cost of the building would be around $6,500. The contract was awarded to local builder James Haney for $6,358.70 who would be responsible for the stone, brick, carpentry work, and paint for the building. The building was to be 70’ x 90’ at its base. It was located on six acres at the south end of Main Street at what most of us would know today as the old fairground.

The Academy's main building had, in addition to classrooms, a music hall, a large chapel, six recital rooms, a basement, and bathrooms. It was completed and dedicated on September 17, 1895. On the day of the dedication there was a parade from the square to the school. The parade was led by the Hon. James A. Rice, followed by Alex Black’s First Regiment Band, the Masons, Knights of Pythias, and the United Workmen. They were followed by the people of Bentonville in buggies, on horse, or by foot. It was called Bentonville Academy, or Bentonville College. The monthly tuition for 1896 was set at $1.50 for primary students, $2.50 for intermediate students, $3.50 for first collegiate students, and $4.00 for secondary collegiate students. In addition to the regular curriculum, he school had music lessons in piano, violin, organ, and guitar. The music classes lasted ten weeks with two lessons per week at a cost $10 for the term. Boarding was available with furnished rooms with heat and lights, and good food, at a cost of $6 to $8 per month.

Not too long after the school opened, it dropped the primary department to improve the college part. In 1897 the school had 105 students enrolled. By 1900 the school’s financial situation was becoming questionable. In June 1901, the school was sold to the Arkansas Baptists, and the name was changed to Ouachita Academy.

The Ouachita Academy built a two story dormitory for the school to house students from out of town. The school was operated by the Baptists until about 1910 when the property was sold to the Bentonville public schools. At that time the academy location became  Bentonville High School, while first through the eighth grades remained in the old public school. Up until this time students could only attend school through the eleventh grade. During the 1910-1911 school year there were no graduating students but included seniors the following year.

The high school remained at this location until a new one was built in 1928. In August 1929, this building was torn down. During demolition, a number of items were found in the cornerstone of the building. including 1894 issues of both the Benton County Sun and the Benton County Democrat. Also included were a Bible, a silver tablet of the Masonic Lodge of Bentonville, the constitution and by-laws of the I.O.O.F , A.O.U.W. and the K of P lodges of Bentonville, and a Columbia Exposition Medal. A list of people who funded the building was also found in the cornerstone. Bricks from the old Bentonville Academy building were later used to build the women’s building at the old fairgrounds. 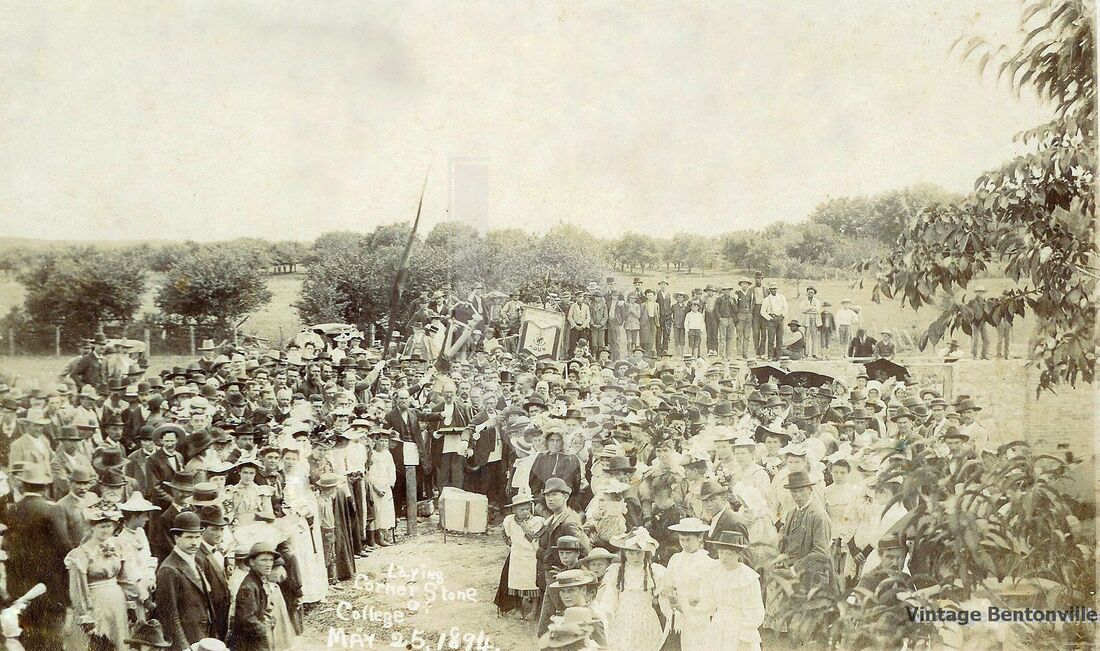 Laying of the cornerstone at the Bentonville Academy - May 25, 1894