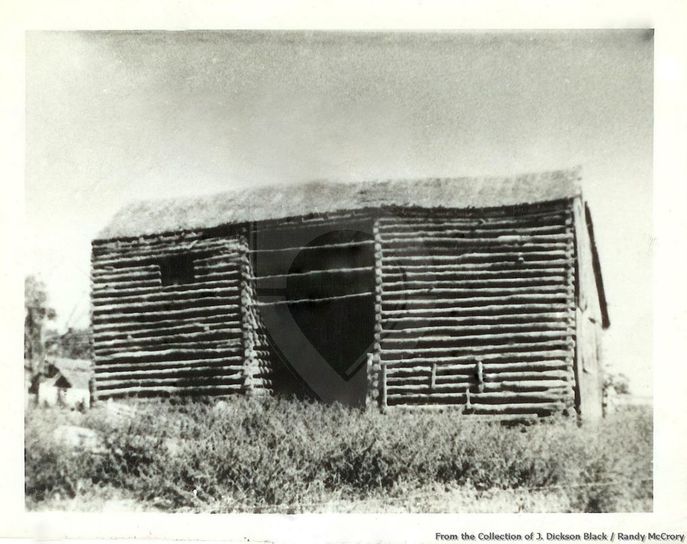 This is a photo of one of the tobacco barns that could still be seen 70 years ago.
People started moving into what was then Lovely County back in the 1820s. During much of that time the Arkansas territory was in a dispute whether this was Indian Territory or was part of Arkansas. In 1828, the dispute was settled with most of the land being returned to the Indians, but a small section went to Arkansas of which the future Benton County was a part. At that time the area began to be settled mostly by people from Tennessee. Farmers started to dot the countryside. In 1836, Arkansas became a state and Benton County was organized.

Tobacco started to become the cash crop of Benton County at that time, producing 395,982 pounds in 1880. This helped the farmers to raise revenue so they could purchase store goods. It was said that the quality of the tobacco grown here was as good as the tobacco grown in Virginia. The main type of tobacco grown in the area was White Burley which was in high demand. It was used for smoking in pipes but also was made into twists or plugs for "chawin'. " During this time there were two tobacco companies located in Bentonville. One was the Trotter & Wilkes Company which was later bought out by the Arkansas Tobacco Company. Benton County led the state in tobacco production. Its product was distributed all over the country. Benton County tobacco was exhibited at both the Chicago Trade Exposition and the Cotton Exchange Fair in New Orlean where it won first place at both. At its peak in the late 1880s, there were between 400,00 and 500,000 pounds of tobacco produced a year. Due to the tobacco being hard on the soil and a drop in prices in the late 1880s, many farmers turned to crops that were less hard on the soil.

In the 1880s, there was a change from growing tobacco to growing fruit like peaches, strawberries, and especially apples. Apples became the new cash crop in Benton County at this time. Orchards started to dot the countryside all over the county .  In 1880, Benton County sold only $4,265 worth of apples. By 1909, Benton County produced more apples than any other county in the U. S. It must have been something to see when all these trees were in bloom in the spring. Hundreds of railroad carloads of apples were shipped out each year.  Every apple was totally used for some purpose. The best apples were put in barrels and shipped to market. The apples that weren't good enough to be shipped to market went to the evaporator to be dried. If the apples weren't good enough for the evaporator, they were sent to the distillery to make brandy or to the vinegar plants. Even the apple cores from the evaporator were used in the distillery. Bentonville had a the Macon & Carson Brandy Distillery, which at one time produced more apple brandy than any other distillery west of the Mississippi. To supply orchards with trees, there were at least two nurseries in the Bentonville area. There was The Davis Nursery run by B.F. and G. G. Davis, which later became Benton County Nursery. That nursery was established in the 1880s. It was two mile southeast of Bentonville at that time, possibly located around where Moberly Lane meets Highway 102 today. The other nursery in Bentonville was just a little northeast of town and was called Blevens Bros. Whole Root Nursery.

​A brochure from this time shows that you could buy 1000 apple trees, 6 to 8 ft tall, for $50.00, or 5 cents each.  One variety of apple developed locally was the Arkansas Black apple. By 1919 there were 5,000,00 bushels of apples sold in Benton County at $1 per bushel. That was the last large crop produced in Benton County. Because of disease and crop failure, apple orchards began to decline, and by the mid 1930s, most orchards were gone.

Above is a brass plate used to mark barrels of Ben Davis Apples
Images are of Blevens Bros. Whole Root Nursery from around 1915
By the 1920s, people started to raise broiler chickens. The first broiler houses in the area would hold 300 to 500 birds, which would sell at that time for $1.20 each, which would be a 55 cent profit. By the 1950s, broiler production had become a big business with 40,000,000 birds in the region. Farmers started to build rows of broiler houses on their farms during this time. In 1946, the Poultry Cooperative was organized in Bentonville. The plant with its new facilities cost $400,000 and was managed by J. O. Kumpe. The plant could process 16,000 broilers a day. Also in the 1930s, cheese producers started moving into the area. A bunch of dairy farms began to pop up around the area. The Kraft plant in Bentonville operated until 2013. It the early 2000s, changes in the poultry industry have eliminated the need for as many poultry houses. Most of the farmland In Benton County is now used for cattle ranches and hay, but a lot of good farmland has been lost to development in Benton County.