​It has been about 86 years since Mrs. Elizabeth Gilbert Dishmon of Bentonville entered first grade there, and she remembers both schoolhouses. The first was a two-story structure a block east of the old Post Office, which is now owned by the county. That building was used also for the Colored Baptist Church and for lodges for both the men and the women. These were the United Brothers of Friendship (U.B.F.) for the men, and the Sisters of Mysterious Tens (S.M.T.) for the women. Both school and church used the first floor, while the lodges met upstairs. When Mrs. Dishmon reached the age of 18, she, too, joined the S.M.T. lodge.

She recalls the singings and programs held at the school, to which many white residents of Bentonville came. There was a platform and pulpit at one end of the large downstairs room. Sometimes these programs and dances were held in the Opera House up over the bank.

The children carried water for the school from a spring a block down the slope from today's courthouse on East Central Avenue, she said. 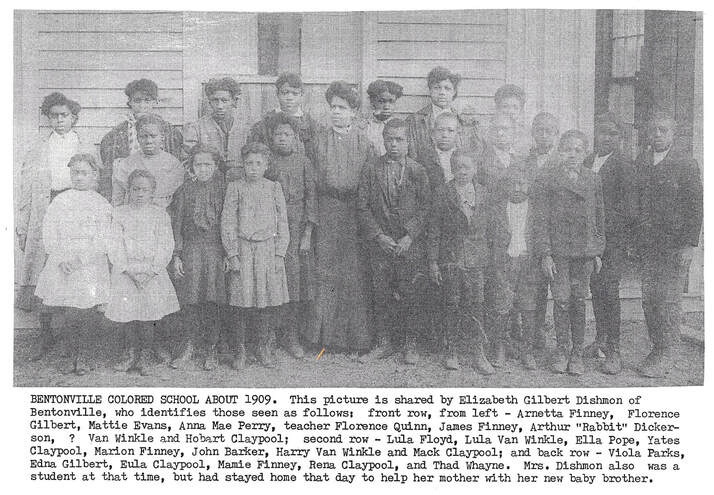 Mrs. Dishmon shows up in another picture of the school taken when she was about 10. Florence Quinn was the teacher. There are two in that photo that she cannot recall, but she remembers that they were the children of the Methodist minister. Those in that picture not showing up in the 1902 photo include Florence Gilbert, Jane Van Winkle, Flora Troutt, Melissa Troutt, Bethena Morrow, James Finney, Albert Morrow and Mattie Evans.

The only record found at the courthouse for the Colored School separate from the rest of the Bentonville school system was a list of eight grade graduates for the 1925-26 term: These were: Ardella Morrow, Helen Rich, Sidney Dickson, Herbert Parks and Elmer Finney.

When the two-story building became old and needed to be replaced, Mrs. Dishmon said, the colored folks themselves got together the funds with which to buy and move another building in for school use. They placed it down North C Street farther north than the site of the old building. A concrete building, now brink-veneered, stands at the corner of that street. The later building was located across the street from the Colored Methodist Church. The church itself is now used as a residence.

Thinking back, Mrs. Dishmon names teachers she remembers in addition to those mentioned. They included: Lizzie McDaniel, a Miss Harris, Hattie M. Finney, Mrs. Henrietta Finney and Cinco Dickerson. The latter was the wife of Arnold (Rabbit) Dickerson, a long well-revered shoeshiner in Bentonville.

A veteran of World War I, Dickerson married Cinco in Fort Smith in 1922. When the schools were integrated and the black students were placed in the white school, Mrs. Dickerson no longer taught.

Mrs. Dishmon"s only child, Elizabeth Ann (Beth) Dishmon (Robertson) went through her first eight grades before the schools were integrated, and had to leave at age 13 to live with an aunt in Springfield in order to get a high school education. She had graduated from the eighth grade in 1934. Her mother has some of her daughter's report cards and other records. One, when she finished sixth grade in 1932 lists school officials as F. A. Woods, county supervisor; Mrs. T. J. Maxwell, primary supervisor; and the school board: W. E. Patton of Bentonville, president; I. C. Patterson of Rogers, vice president; Mrs. R. B. Keith of Hiwasse, secretary; and Charles Henderson and T. C. Tinnin of Gravette.

Elizabeth Ann went to graduate from college at Pine Bluff, worked for the arsenal there two years, then returned to Bentonville where she taught a year at the Colored School before moving to Los Angels.

As the Black population declined in Bentonville, there came one year when there was only one small boy to be educated, Mrs. Dishmon recalls. He was sent daily by bus to the Colored School in Fayetteville. One day, returning home, he failed to realize he was in Bentonville and rode all the way to Neosho.

Finally, quietly and without incidence, integration came to Bentonville. There were only a few colored students to integrate. Some now have graduated from Bentonville High School. Most have left the area, and today there may be only 20 of so Blacks in the Bentonville area.

In the three pictures of the Colored School during the years that Mrs. Dishmon was a student there, she could think of none seen in them who still are alive except herself and her 96-year old sister, Enda Gilbert Thomas of Springfield, Mo. Although the origin of the school appears to have been lost in the mists of time and the exact date of its closing was not located, Mrs. Dishmon has helped preserve the memory of the school and the names of some who received their education there.

It is Mrs. Dishmon's belief that the one in Bentonville may have been the only Colored School in Benton County. She was well aware of the one in Fayetteville and an early-day one at Cane Hill in the same county. Others in an early day were also known to have existed at Cincinnati, Harris, Lincoln, Summers, and Hogeye, all in Washington County.