On June 18, 1958, a new livestock auction was started in Bentonville. Due to the fact that the dairy industry had taken off in the area, it meant that there were more cattle, so there was an increased demand for a livestock auction. The Bentonville Sales Development Corporation was formed, selling stock to pay for a new auction building. The sale barn opened under the name Bentonville Livestock Auction.

At the first auction, 1000 head of livestock were sold, bringing in about $50,000. Calves were selling at 29 cents a pound, and heifers were going for 20 to 21 cents a pound. In 1960, the livestock stock sales for the barn were $2,400,000. On the opening day of the auction, coffee and doughnuts were served by Price Coffee, the manager of the barn. A drawing for merchandise prizes was held, with only sellers of livestock eligible for the drawing. In the first photo from left to right are Knox Grimsley, Bud Swartz - Clerk, Negal Hall - Auctioneer, Price Coffee - Manager, Tommy Yeargaim, and Truman Coffee. The livestock auction was located on a nine acre tract on highway 71. The building was 56' X 60' and made from concrete. The inside had a ring with seating for about 300 people. It also had a concession area that was know for its good food. The pen area was 75' X 120' and has three aisles. 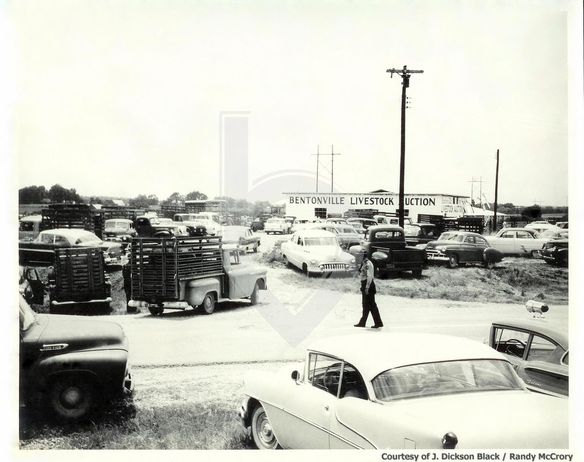