Bentonville has had many newspapers over the years. Some papers last just a brief period of time , while others operated for quite a number of years. Many of these papers have gone through numerous owners during the life of the paper.

The first newspaper to appear in Bentonville was the Northwest Appeal, which moved to Bentonville from Madison County in the summer of 1857. There is also reference to a Bentonville Appeal - Independent in 1857. It was first owned by J. P. Owens and B. T. Perkey who published the paper for about four or five months. The paper was revived by B. T. Perky and  John R. Cox, who became the editor of the paper. It was later sold to M. E. Harvey, then closed in 1859.

There were no newspapers were printed in Bentonville during the Civil War.

In 1866, a newspaper was started called the Beacon, which only lasted a couple of months.

Then came the Arkansas Traveler in 1868 which was started  by A. Caraloff. After about eighteen months, this paper was absorbed by the Democrat and owned by H. S. Coleman who two months later sold it to A. B. Cory. The paper only lasted for about three months.

In the early to mid-1870s, the Corner Stone paper was started by T. Y. Reynolds. The paper only lasted a few months.

The Bentonian was started in 1873 by Gaston and Ham but didn't last long.

The longest-lasting paper up to this time in Bentonville was The Weekly Advance, which was first published in 1873 by Capt. R. S. Hynes, who was the editor and proprietor of the newspaper. This was also the first paper that became known statewide. This paper was published until 1877. 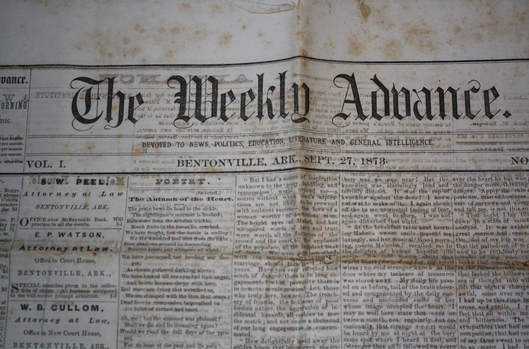 The Southern Rising Wave of Temperance was started in Bentonville in Nov, 1884, and later moved to Little Rock. Rev. J. M. Clayton was its editor.

The New Bentonville was started by Ed Porter Thompson in 1881. The paper was suspended in 1883 due to Mr. Thompson's health. It was later revived by S. D. McReynolds and S. M. Womack, who changed the name to The Bentonian. McReynolds continued to operate the newspaper until 1885, when it was sold to J. B. Thompson. The name of the newspaper was then changed to the The Benton County Journal. Not long after that W. A. Bumbuger purchased half interest in the newspaper, and by the fall of 1886 he had become the sole proprietor of the newspaper. By July of 1887 the paper had again sold to S. M. Dailey. The paper continued to be published until 1902.

​In 1886, the Benton County Democrat, owned by D. W. Hamon and John Corley, was founded. J. B. Thompson and Henry A. Cook were among the early editors. About three years later the paper was sold to Joe Stevenson and and Gus Hurley. A few years after this Hurley left, and Stevenson ran this newspaper for the next 25 years. The paper was located in the People's Bank building on the southwest corner of the square. ​​It was the leading paper in Northwest Arkansas by 1912, when it was sold it to Ben S. Terry who operated it til 1921.  It was then leased to J. T. Denton and J. C. Hamilton until 1922.  At that time he sold the paper to O. D. Stiles. 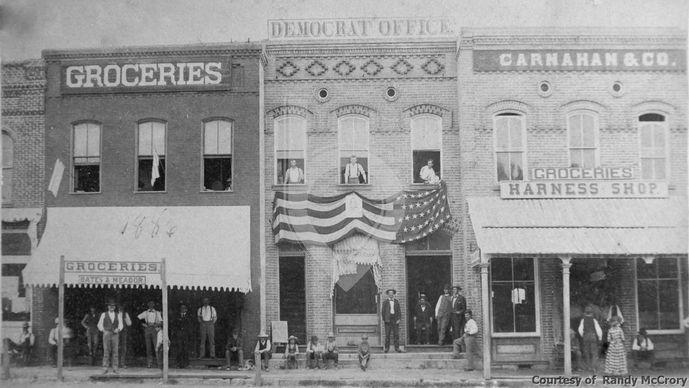 The Democrat office, 1888 - Grover Cleveland was running for president  in 1888 and The Democrat in Bentonville was all out for Cleveland. Sitting in the doorway is Joe Stevenson, owner of the paper, who had recently arrived from Ireland. In the window (left to right) are Bud Grammer, Sam Maxwell and Jack Maxwell. In the derby hat is Gus Hurley, standing on the front step. Hurley was co-owner. Others are not identified.
​
In 1890 Harvey L. Cross started a newspaper call the Benton County Sun. It started out as a weekly newspaper like all the rest of the papers, but for a few months it became the first daily newspaper in Bentonville. In 1904, Mr. Cross sold the paper to W. J. Douglass, but bought the paper back the following year. In 1914 Harvey Cross moved to Little Rock to become the grand recorder of the Ancient Order of United Workerman. During his absence, the paper was run by his daughter, Mrs. Frank (Zillah) Peel, who was also a part-time magazine writer. That paper continued until 1921. 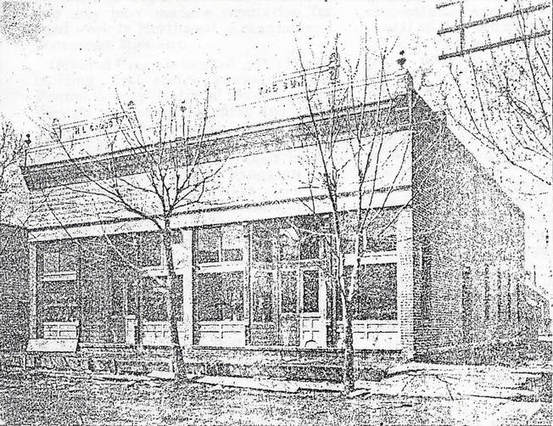 Although not a very clear image, this shows the old Sun office that was located on S. Main St. You can see on the top of one side of the building "H. L. Cross", and on the other side "The Sun"
The News, at Bentonville, was put out in 1905, by W. L. Marley, but it was not a success.

In 1916, W. H. Plank and his son Will moved to Bentonville and started the Benton County Record. In 1921, they started to buy up their competition with the purchase of the Bentonville Sun.  The sale marked the passage of one of the oldest newspapers in Arkansas. Mr. Cross was one of Arkansas' oldest and best known newspapermen, a past president of the Press Association, and for a third of a century was connected with the press. Then in 1925, Plank purchased the Benton County Democrat. Then he changed the name of the paper to the Democrat and Record.

In 1926, the Benton County Herald was started by Lindsey and Boren. This paper was in publication for ten years.

Another paper operated for just a couple of years in the mid-1960s called the Benton County Observer.

Eventually the Democrat was purchased by Benton County Publishing. The name was at some point changed to the Benton County Daily Democrat. This paper was later purchased by the Arkansas Democrat Gazette but kept operating for a long time under the old name. In January 2015, the names of multiple northwest Arkansas papers were consolidated under the name of the Northwest Arkansas Democrat-Gazette.


Please note: This article was compiled from multiple sources that contained conflicting information in some cases. There may be some minor inaccuracies in details and dates, and we are sorry if this is the case. If you have verified information to share with us, please do so using our contact information.