History of the Bentonville Public Library
A compilation by Lynn Eldred, Randy McCrory & Hadi Dudley
The Bentonville Library is located in Bentonville, Arkansas, which is the county seat of Benton County, established in 1837. Due to being far inland, growth in the community was slow, and in 1860, just before the War there were only five general stores, three machine shops, and a few county buildings, but no library.

According to the Bentonville Sun newspaper, December 12, 1891, there was a faint sign of interest involving a kind of library. The Historical Club met once a month, and since they did not have a library, they as members would purchase a book, read it and pass it on. These books were then saved in hopes that someday they would have a library to donate them to.

Around 1900, a small book club was organized. It started with about 15 members. Each member would contribute $1.10 and the books were circulated among the members. In the second year, there were 25 members; in the third year, 52. With the growth of the city in 1903, it organized as the Book Club Library Association, with Mrs. L. R. Delong as president, and Mrs. Anna Wood; librarian.

Through the generosity of Colonel Peel, the book club organized above the Jackson Dry Goods Store (where the Wal-Mart Museum is today.) The library took up the entire upper floor consisting of three rooms. The "Study Club" agreed to furnish the rooms. The Bentonville Library would charge an annual fee of $1 to its members. It provided up-to-date magazines and new fictional works. We know this group was still in operation in 1906, but do not know how long it operated. 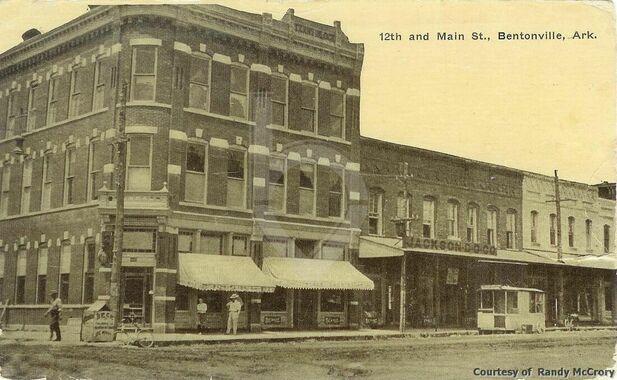 In this photo you can see the Jackson Dry Goods Store. The first organized Bentonville Library was located on the second story of this building.
On November 11, 1918, a library was established in the east room of the Massey Hotel and was a sizable library. However, because of lack of funds, and no hopes of paying a librarian, and problems of people not returning books, the library soon closed.

Then a very ambitious man came to Bentonville in 1931. His name was Dr. Allen D. Clark of Seoul, Korea. He spent the summer as a "Supply" Pastor at the Presbyterian Church. After working with the young people and seeing no hope of a library, he began to have book drives, asking for donations, soliciting help from friends in the east; and books began to come in. The library was located in the basement of the church and was named "The Dr. Allen D. Clark Library." Many women helped as librarians such as Mrs. Fred Berry, Miss Leta Bryan and Mrs. Kathryn Eldridge. A list of charter member was drawn up by J. T. McGill, an attorney. Mayor Sam Beasley called a public meeting to form a city library, and in 1934 the library became a  a corporation.

On May 9, 1935 the library moved to its new home. It occupied the back room of the building. Later it was moved to the front and was placed on the east side of City Hall. The library was open seventeen hours per week. 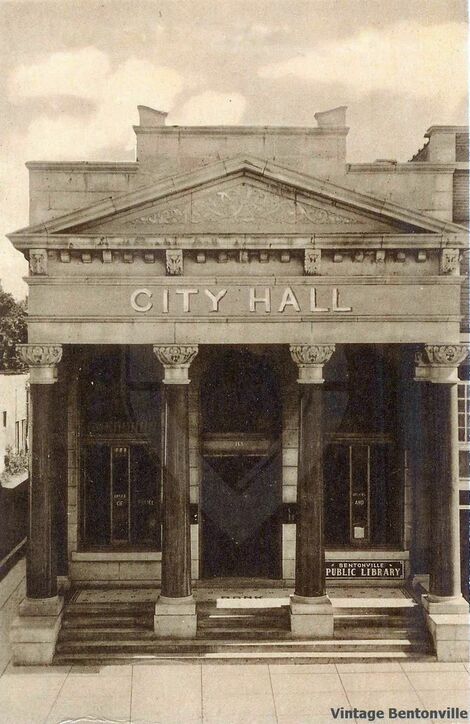 A photo of when the library was located in the City Hall building. You can bee the sign under the window to the right.
During World War II the W.P.A. paid for a full time librarian, Miss Fay Ashbury. The F.E.R.A. also gave financial help, and money was obtained to buy books for the children. The city voted to give $10 a month for expenses. The Study Club began the practice again of members buying a book and passing it on; then they were donated to the library. The Chamber of Commerce was a great help and donated money. This method was used until the Community Chest was formed.

After Miss Ashbury left, Miss Anna Graves became librarian in 1942. When she was librarian she was very loyal, always at work no matter what kind of weather and worked for $21 per month, which the W.P.A. paid. In 1945 the W.P.A. help stopped, and the city and library paid her salary of $30 per month. The library at that time was open six hours a day, five days a week.

Mrs. H. R. McKeen became chairman of the Library Board; and with her help and the businessmen of the town, many books were purchased. Mrs. McKeen worked long hours, asking for help; and she had a very useful slogan she used. She would say "to how many of the 519 children will you contribute at least one penny's worth of reading material as a Christmas present?"

In 1949, because of poor health, Mrs. McKeen resigned; Mrs. Bee Ely became president of the library board. She began right away asking for help from the City Council, Community Chest; soon the Community Chest gave $500 a year for book purchases. Mrs. Ely purchased books from many sources, and she began putting the Dewey system on all books. This alone was a great help and took many hours of work.

Disaster fell along the way as in 1963 it was realized that the City Hall was becoming overcrowded. Worn and obsolete books were culled and the reserves were stored in the basement. Cockroaches and silver fish ate the books, and the few that were salvaged were brought back upstairs to be stored on top of the shelves.

One good thing came of this: it was finally realized that because of overcrowding there should be a new library building. The Church of Christ was purchased in October, 1963, and the building was opened to the public. At the time there were 7,000 volumes, and 500 books from the Arkansas Library Commission. 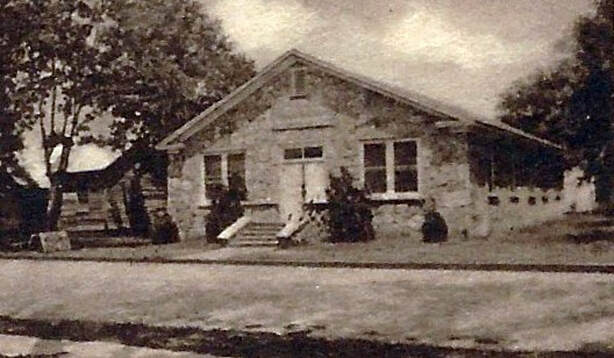 This library was located in the 300 block of Southwest A Street.  The new building was completely remodeled and redecorated.
Soon after the move came another disaster. Termites invaded the building in swarms, and the library had to close for one month while the much-needed repairs were taken care of.

There was much to be done, and changes began to take place after Miss Chadbourn arrived. Basic reference books, microfilm reader, microfilm of Benton County newspapers, larger magazine collections, and large print books were all purchased. Story hours for children, new tile floors, tours for school children and the endless push for a one mill county tax was started. It was sad, but the tax did not pass. In November, 1975, Mis Chadborn resigned to accept a position at the University of Arkansas.

There was a great increase in circulation, almost 1,000 a month, in one year. Rapport with the schools increased, and the library constantly worked to help bridge the gap with the school system.

The library continued to add to its collection and by the 1970s had outgrown its space. The Walton family, after see the condition of the library at the time, bought the old Massey Hotel building in 1977. The Massey building had burned down a couple of years earlier. The Walton's plans were to make the first floor the Bentonville Public Library and would lease out the second and third floors as office space. Construction on the building began in January 1978. The new facilities were open to the public on November 11, 1979. 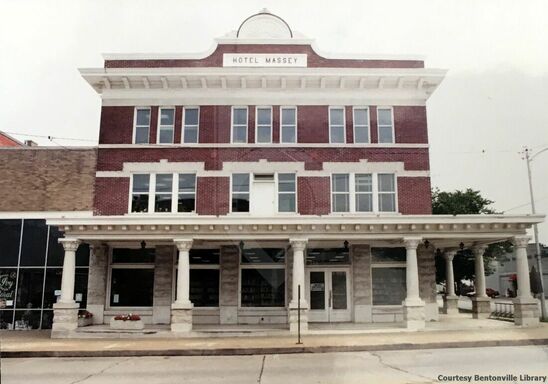 This photo is of the Massey Hotel when it housed the Bentonville Library (Photo courtesy Hadi Dudley)
The library continued to grow. With it was the addition of one IBM computer in the mid-1970s, and by the late 1990s they had five internet computers, two CD Rom computers in the children's department, two card catalogs, and three PCs for staff use. Again, the library was outgrowing its space. In 2000, there started to be conversation about possibly building a new library.

June 30, 2001, Lynn Mann Eldred retired as librarian after serving for 25 years. On August 1 of the same year, Cindy Suter was hired as the library director. Suter's main goals was to expand the library's computer technology and build a new facility.
​
Suter got right to work with plans for a new library. It would be on Main Street where the post office used to be located. This library would be 38,000 square feet, with large areas for children, teens, history and genealogy. It would also have several community meeting rooms. The new library would be 10 times larger than the 3,800 square foot old library.

In 2003, the Bentonville Library Foundation formed to help generate funds to construct a new building. By 2006, the library foundation had raised most of the 9 million dollars for the new library and construction was started. The city made a 2 million dollar contribution toward the building of the new library.