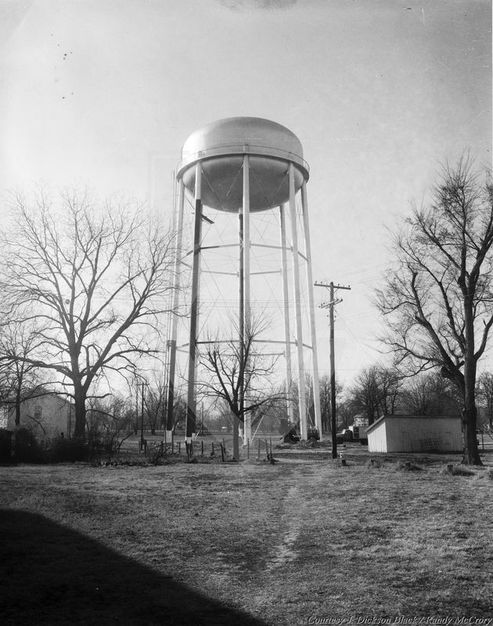 Bentonville's first water came from a well that was located on the square about where the Confederate statue is today. Later, a well was dug near the train depot which pumped water to the square by windmill power. At that time, the train depot sat just off the S. E. corner of the square. In 1896, Bentonville had its own water system installed at a cost of $27,000. The source of the supply was Ford Spring which had a normal flow of 400,000 gallons per hour, located three miles northeast of the city in the hills near Little Sugar Creek. At the spring was a substantial pump house containing a Worthington Duplex pump, having a capacity of 20,000 gallons per hour. A six inch main carried the water to a distribution tower. The tower was situated a half mile east of town, where it consisted of a steel truss surrounded by a cypress tank that held 55,000 gallons. This structure stood 116 feet tall. At that time the water was brought from the tower to the town through an 8-inch main, and then was broken down to six, four and two-inch pipes. At some time, the 8-inch lines were replaced with a 12-inch tile line.

By 1913, citizens paid for their water at a fixed annual rate. Here are some of the rates at that time: Bank $6; Bakeries, $8; Barber Shops, one chair $4, each additional chair $1.50; Bath House public, each tub $8; Bath House, private $6; Blacksmith, $2; Boarding House, six rooms or less, $6. Water lines were connected to either steel or lead pipes at that time.

In 1935, the city's application for improvements to the local water system was approved as a Works Progress Administration (WPA) project, and work was started late in that year. The plan was to dig up and reinstall all the water lines in the business and residential areas of town. The goal was to give the town an ample supply of water to fight fires. There were also two deep wells drilled to supplement the water supply from the spring. The 12-inch tile lines were broken and leaking badly and were replaced with a cast iron 8-inch line. A new electric pump station was constructed with the capacity of pumping 250 gallons per minute. A gasoline engine was added that could be used in case of a power outage. The new equipment replaced an old steam boiler and pump that had been there for 39 years. A two story frame building was constructed to house the chemicals, chlorinator, and two new pumps. The system had a storage capacity of 550,000 gallons which was about a three day supply of water at that time. The cost of the project was $43,636, with the federal government providing a little less than half that amount. This project was completed in 1937.

In the mid 1940s, the city had an engineer's report done on the city water system. It made many recommendations to improve the water systems. In 1952, the city council voted to build a new $475,000 water system. The estimated cost of the Ford Spring project included developing the supply, constructing a filtration plant, treating water, adding a storage tank and an elevated storage tank, and connecting water mains. At this time, they talked of building a dam on the Little Osage Creek or McKissick Creek as a source of additional water for Bentonville. By 1954, this project had been completed. The new water tower, which holds 500,000 gallons, was constructed by R.E. Baker Elementary school and stands as a symbol for the city even now. The new filtering  plant at 802 N. W. A St. could filter 2,000,000 gallons of water per day.

In 1963. as Beaver Lake was being created, the city of Bentonville joined the Beaver Lake Water District to supply the city with water. The contract called for Bentonville to pay $7,000 a year for the next 50 years for water from the district. The city would be guaranteed a supply of 4 millions gallons of water a day. The cost to run the lines to Bentonville would be about a million dollars. Bentonville continues to source its water supply through the Beaver Lake Water District today.
On Oct 9, 1954, the new water filtration plant had an open house to show the public their new facilities

Newspaper article from The Bentonville Sun Aug. 15, 1896.
​ This is about starting the original water works in Bentonville