Bentonville's Last Blacksmith
By J. Dickson Black (1960)
"I've seen a lot of changes in my 79 years," said Tony Back, "and the one that hurts me the worst was the coming of the car. It  not only took away my friends the horses, but my business of blacksmithing as well. "

Tony was born in Jutland, Denmark in 1881. He was left an orphan as a child and was raised on a farm close by Jutland.

When he was 17, he made up his mind that there was very little money to be made in farming. Needing a trade he hired out to a blacksmith for three years. At the same time he went to night school in Jutland.

"I knew that if I was ever going to make a living, I would have to have a better education than grade school I had then," said Tony

Those days in Denmark every boy had to spend a year in the army. Tony was 22 when he went in. As soon as he got to camp, the camp blacksmith tried him out, then made him a blacksmith for the army.

Tony liked this for it paid a little better than the regular army pay of five loaves of black bread five days and 75 cents from which one had o buy the rest of one's food, and anything else needed.

Tony stayed in the army one and one-half years. He had about 150 horses to shoe all the time, as well as wagons and equipment to keep repaired. this helped to round out his education as a blacksmith.

"By the time I was out of the army, I could see that I couldn't make a good living as a blacksmith or any other trade in Denmark," Tony said. "so I made up my mind to go to America."

That took more money than Tony could save as a blacksmith, , so Tony did a little planning. He got a job on a produce boat running from Denmark to England. After two year, he saved a little money and had experience enough to get a job on a transport ship to America.
Tony was just 25 in the spring of 1905 when he landed in New York. He didn't have much money and could speak only a little English. He got a job within a few days, then started night school to learn to talk to the people in his new country and home.

Tony was a hard worker and learned fast so he soon had a job as motorman for New York for the New York City trolley. In the spring of 906 some men showed up one day wanting to hire motorman to go to work in San Francisco. The pay was good - the best Tony had ever been offered. Rail transportation was free to Frisco too.

There were several car loads of men who quit their New York jobs and got on a special train bound for California, and the best pay they had ever made. At Reno, Nevada, the train was stopped and the train crew refused to go further. It was then that the men learned that they had been hired to break the trolley strike in San Francisco.

Because there were no radios and most of the men didn't read the newspaper, then didn't know about the strike, or why they had been hired. After a few days, the train went on to California, but a lot of men left in Reno.

When they got to San Francisco, there was a fight the first day. Then all the strike breakers were arrested. The boss had given some men pistols. The police put all men in a big room to search them. The pistols  were passed down the line behind the men, and then dropped into a wastepaper basket. They were all turned loose, and by this time the strike was over. The company offered the me return passage home or $66.00, and the choice of staying in California and getting a job.
Tony took the money and sent it and a little more to his sweetheart in Denmark so she could come to the state. She had a brother who lived in Wiggin, Mississippi. The arrangement was made for her to go there where Tony would come for her. He worked until the winter of 1906 for Portland Cement Co. in California. 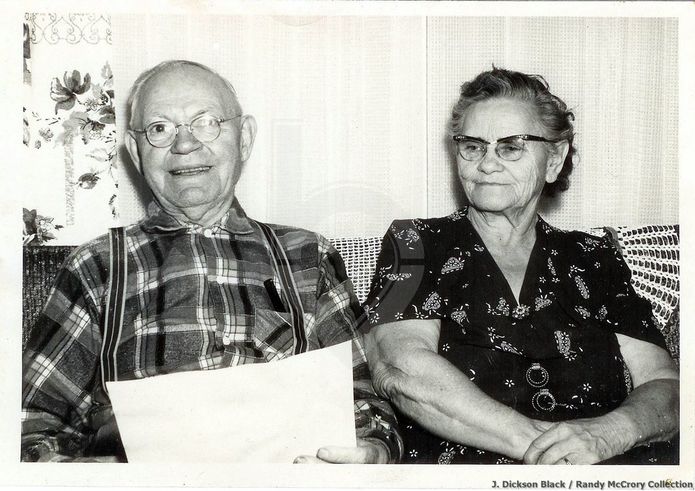 Tony Back and his wife are looking over an old picture of the blacksmith shop in Bentonville in Bentonville, ARK., which hold a lot of memories for both of them.
Then he moved to Wiggins where he got a job with a sawmill outfit as a blacksmith in a railroad shop. He and his sweetheart were married in March of 1907

By the spring of 1908 he had grow tired of working on machinery all the time and didn't like the climate in Mississippi. He and his wife decided to move to Arkansas.

In cleaning up and packing to move, Tony burned up $200.00 worth of money orders that he had bought in his own name. This was his way of saving money and was all they had.

He came to Arkansas by himself, leaving his wife with her brother until he could get a reissue of money orders, so she would money to travel on.

Tony found a job in Bentonville, Arkansas. He went to work for Dan Richards in his blacksmith shop. He was back to work now with horses and was a lot happier.

That fall Tony started a blacksmith shop of his own. It cost him about $150 then to buy all the tools he needed. At that time there were five shops in Bentonville, employing 11 men. "They all said that Duchman won't last long," Tony said "But I was the last blacksmith in town to close.

In the early days he had a lots of horses to shoe. Almost everyone in town as well as those on the farms had a horses. Tony was very good at shoeing a bad or hard horse, so he was kept busy shoeing the hardest ones.

In the spring of 1908, Tony bought a partnership in a blacksmith shop with John Oaks. It was the biggest shop in town. They changed the name to City Blacksmith Shop. Tony stay here until 1920, but his partners changed over the years. 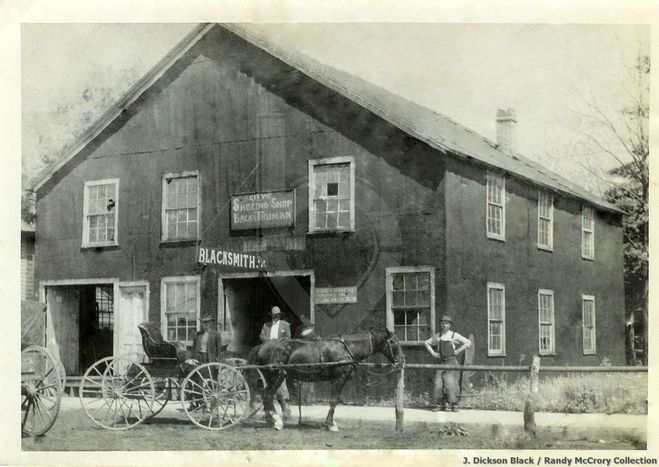 This picture of the City Shoeing Shop and Blacksmith was made in 1910. At that time this was the biggest shop in town; smithies were paid $1.00 to shoe a horse, and this price included the shoes. This shop was located if I'm correct in the 200 block of S. E. A St.
​They were the first blacksmith shop to put in electricity. In 1910 they not only had lights but an electric blower and a few tool.

That year too, they started to put rubber tires on wagons. They charged $1.00 a wheel for the labor and people paid for the rubber. That ran from $5.00 to $8.00 for the four wheels. They could have round or flat rubber put on. Wagons and buggies were brought in from Oklahoma and Missouri to be worked over

"We had one of the biggest and best equipped  repair shops in the area," Tony said "The shop kept three men busy all the time. Some seasons we hired more. I always had a hard time getting off on Saturday night." People were alway coming in saying" Tony, My horse threw a shoe coming into town. Could you fix it so I can get home. "

"We all worked cheap back in those days." said Tony. "When I first came to Bentonville we paid $1.00 for shoeing a horse, and included the shoe, fitting then and nails as well as putting them on."

They had black shoes then, but they had to be fitted and then the cork put on. There was nso much ice in the winters that blacksmiths had to put ice shoes on the horses that were going to be working and put on the road.

In the 1920 Tony sold his interest in the City Blacksmith Shop and started a new shop with Sam Edwards.

Over the years, Tony had told his wife someday he would take her back to Denmark to see the folks. So in spring of 1921, he sold everything he owned in Bentonville, and went back to Denmark, with his wife and four Children.

"I didn't know at the time what I would do," Tony said, "I did think if I could find a good job I would stay in Copenhagen. That was his wife's home. But by late summer of that year , I just said one night, Let's go back home to Bentonville, before the money runs out. So back we came on the next boat. "

Tony bought the shop he had fist worked in from Dan Richards. "At that time I said I wouldn't work on any type of car. I once put a sign up saying this," said Tony "I just didn't like the things and didn't think too many people would buy them.

Then he started to put a trailer hitch now and then on cars. Soon he was making springs for them and had a car of his own, so he could go out and put a car spring wherever they broke down.

By 1930 the horse shoeing and buggy repair was gone. The car had been improved too much to stay behind the horse.

Tony then became a junk buyer and for years did well at this. But the depression of the late thirties was too much for Tony. He sold the shop and home for what little he could get and started working his way west. He had only one child at home then. He go a job as manager of a labor camp in Gridley, California, where he worked until he retired in 1949. The spring of 1958, Tony and his wife came back to make their home in Bentonville. "The town has changed a lot," said Tony "But as I walked down the street, I can still smell the thing in mind as it was over fifty years ago when I first came here."

Tony will never forget the fine horses he shoed in his shop here. But those days are gone forever. "I'm still not sure that the car is better than a horse even if it is faster," he said.