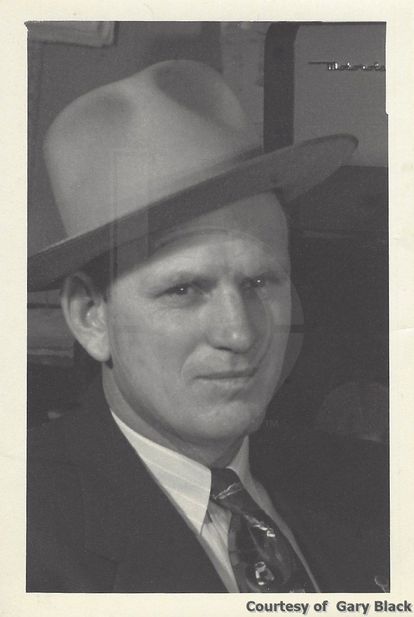 ​John Max Black chose to follow the example set by many of his ancestors a life of public service career.

John Max, the middle child, was born in Muskogee, Oklahoma on August 15, 1914, where his dad was working for the railroad. The family also lived in Kansas for a period of time, including along Spring River in Riverton, when his father was employed by Empire Electric.

John Max told the story of living in a tent placed on a wooden platform. John Max was awakened one night by the sound of rushing water. A heavy rain caused the river to rise rapidly, almost surrounding the platform the tent was on. He and his father used a team of mules to pull the platform to higher ground.

Back in Benton County, John enjoyed being pulled around in an orange crate with wheels attached by his dog, Bevo. He often pointed to where Bevo was buried when driving to the family’s former home on Little Sugar Creek.

John and his father would cut wood in the Little Sugar Creek area and take it by wagon to Bentonville to sell. John would get 15 to 20 cents to spend. Not all the trees were cut; for many years, one could see John’s initials carved into a sycamore on Sugar Creek Road.

John walked 3 miles each day to school in Pea Ridge, often arriving home after dark. He was a good athlete with a great two-hand basketball shot.

John and a group of teammates were returning from a Fayetteville tournament when the vehicle they were traveling in was hit by a car. John “slid down the road on his head,” and was hospitalized for quite some time recovering from injuries sustained in the accident. The community came together supporting the Black family with fundraisers during his recuperation.

As an adult, John would play semi-pro basketball on a team sponsored by the Phillips Petroleum Company of Bartlesville, Okla.

Gary Black describes his father as a “yellow dog” Democrat, a “hard worker”; and a “giver to the community”.  John Max was "a carpenter, an electrician… he could do anything." One might say John Max was a “jack of all trades."

John Max married Maxine Watson on Sept. 4, 1937, in a house where Dave Peel Park is now located in downtown Bentonville. Their  first son, Eddie, was born in March 1939, followed by Gary in December 1942 and Phyllis Jo in May 1946.​

World War II intervened in John Max and Maxine's family life. He enlisted in the U.S. Army, and served in the European Theater. He later served as first sergeant in A Battery, 142 Field Artillery of the Arkansas National Guard, based in Bentonville.

Listed as a farmer on Phyllis Jo’s birth certificate. John Max began his law enforcement career in 1947 when he was hired as chief deputy under Sheriff Charles Womble. He served in that capacity through 1950, when he ran for sheriff as a Democrat, and won. John Max earned $5,000 per year, with an allowance of 75 cents per day for food for each prisoner held in the county jail. The Black family also lived in the jail, and Maxine cooked for the prisoners.

Sid Jackson and Earl Rife served as deputies, and the annual department budget was only $18,000. John Max had to provide his own vehicle for several years, a common practice in small departments throughout the country. He received a small stipend for a car expense.

John Max told a reporter in 1986 he found that “nine times out of 10 a few well-chosen words to a young lawbreaker would suffice to put him on the right path." His children said their father would often call an individual facing criminal charges and ask him to turn himself in. More often than not, they did so.

John Max lost a bid for re-election in 1954, but John Max continued his law enforcement career, joining the Arkansas State Police Weights and Standards Division in 1955 where he worked until 1973. He was Bentonville police chief 1973 – 1977 after which he retired.

John Max died May 18, 1998, and is buried in the Pea Ridge Cemetery. After John’s death, Benton County Sheriff Andy Lee and Bentonville Chief James Allen each parked a patrol car in John Max’s yard to recognize his service to the community.

A public visitation was held at Bentonville Police Department. Following the funeral, a motorcade traveled from Bentonville to Pea Ridge, including a trip through the downtown area of Pea Ridge. As the passed the old county jail in downtown Bentonville, two deputies saluted the motorcade with what is known as the “dead man’s salute.”

Gary Black – who was a reserve deputy working with inmate work program – recalls seeing inmate workers standing alongside the road in their jail uniforms, their hats in hands over their hearts – a silent tribute to a man they didn’t know.


This biography is from: The Black Family of Benton County, Arkansas – The Descendants of John Black 1854-2016 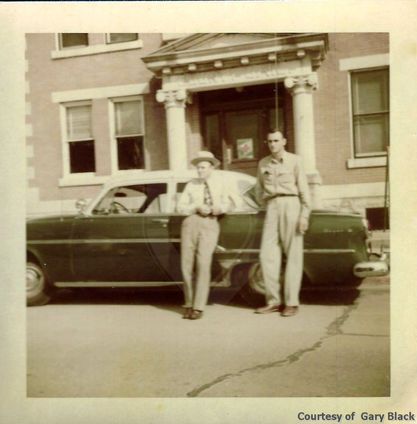