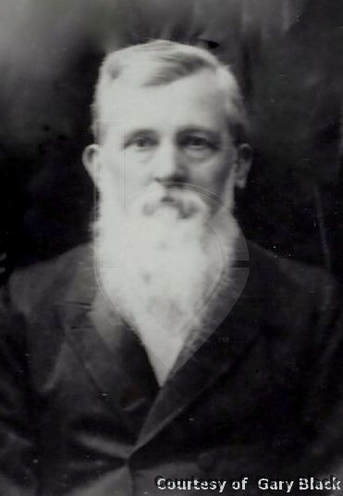 The Black family's ties to northwest Arkansas can be traced to John Black’s move from Tennessee to Carrollton, Arkansas, in Carroll County, then to Bentonville. John Black was born August 22, 1831, in Warren County, Tennessee. His parents were Alexander and Mary Clark Smith Black. He was one of nine children in a prominent family in McMinnville, Tennessee.

John was admitted to the bar at age 20. One year later he was on the move to Arkansas. Why John chose to leave his family and head west is not known. Was it a sense of adventure? Did he have a job offer? His father’s cousin, William, and his son, Samuel were already living in Washington and Benton counties. Could that have encouraged the move?

Historians say Northwest Arkansas’s climate, environment and other elements important to life in the 1800’s resembled the McMinnville area of eastern Tennessee. Perhaps those similarities interested John. There are many current northwest Arkansas residents who can track their families to the McMinnville area. Could John have traveled with other Tennesseans seeking a new life?
John’s first stop in Arkansas was Carrollton. Now little more than a sign on U.S. 412 just west of Alpena, the Carrollton of 1852 was very different. Serving as the Carroll County seat by the time John arrived, the town boasted a brick courthouse, a county jail, a post office, two hotels and other businesses.

John stayed in Carrollton a couple of years, apparently practicing law. He moved to Benton Count and was admitted to the Benton County bar in 1854, then he hung out his single and began practicing law. He also met and married Sophia Hilburn Greenwood, the daughter Alfred Burton and Sarah Greenwood. Sophia was born in Georgia and had joined the family in a trek across the country to northwest Arkansas much like the one John made.

Alfred Burton Greenwood was an attorney and prominent politician in Arkansas, and there seems to be little doubt that John’s July 10, 1855 marriage into the Greenwood family played a part in the path of his life would take. For example, his father-in-law was working on the Trail of Tears, helping move the Cherokees from their ancestral home in Georgia to Oklahoma, when he heard about Benton County, Arkansas. John Black also worked with the country’s Native American population. Federal documents list him as an assistant Indian agent. Family history refers to the tribe as the “Poney,” but that is apparently a reference to the Pawnee tribe in Nebraska where he worked between 1856 and 1858.

John apparently returned to Arkansas and the practice of law after his time working with Native Americans. However, the Civil War broke out in 1861, and, in 1862, John joined Company F, 34 Regiment, Arkansas Infantry. he served 3 ½ years.

John returned to his law practice after the war, but it wasn’t long until he began a career in government service. In 1869, he was appointed county attorney. Three years later he became county clerk and was responsible for the county and probate courts, as well as recording official documents. First appointed to the position, he was re-elected county clerk in 1876.  John served in the position until 1892 when he was elected to serve in the State House of Representatives.

Throughout his life, John was active in the Cumberland Presbyterian Church. The importance of John’s faith is also reflected in an Annual Report from the American Bible Society released in 1871. He is listed as corresponding secretary of the Benton County chapter of the Christian ministry established in 1816.

A learned man – family history says he had the largest personal library in Bentonville – education of Bentonville’s youth was a concern of John’s, and of his church. John helped the church form the first school in town. The Sabbath School was established in 1866. First built in 1841 as a subscription school, the building was destroyed during the Civil War. The building, at 306 NW 2nd St., was used by several churches and schools before becoming Bentonville Sabbath School. The names of the Black children could be found on the rolls of the school, and John served as school superintendent for a period of time.

In the 1890’s, the first public school was established in Bentonville. The Sabbath School building became a private residence, and underwent many changes. It is still standing, and is home to the Benton County Historical Society.

In addition to practicing law, John also played a role in Bentonville’s business growth; The Benton County Bank was organized in May, 1885 by John who was listed as its president. In May, 1887, the bank was reorganized, and the capital stock was increased to $50,000, all paid up. John apparently ceded the president position later, as he was listed as a stockholder. The bank was located in the Terry Block Building, on the southwest corner of the square. The three-story brick building in the early 1800’s and stands today.

John was also a charter member of the Benton County Chapter of Royal Arch Masons which was formed Oct. 23, 1874.

Throughout historical documents, John is referred to as “Uncle” by those who were not blood relatives. It is likely the honorary title was conferred because of his commitment to the community. It is also a title readily used throughout history to kind people with good dispositions.

John died on Christmas Eve 1901 at his home. He was buried the next day in the Odd Fellows section of the  Bentonville Cemetery

Bio is primarily from: The Black Family of Benton County – The Descendants of John Black 1854-2016 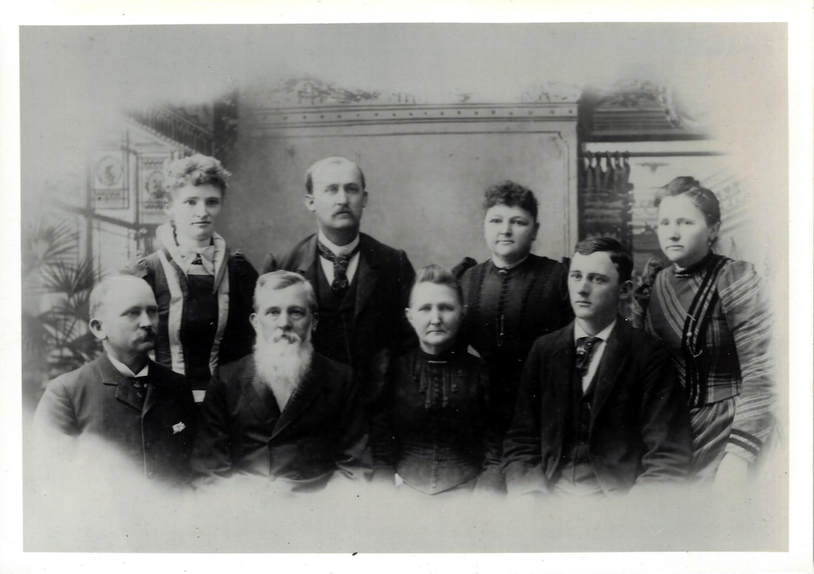 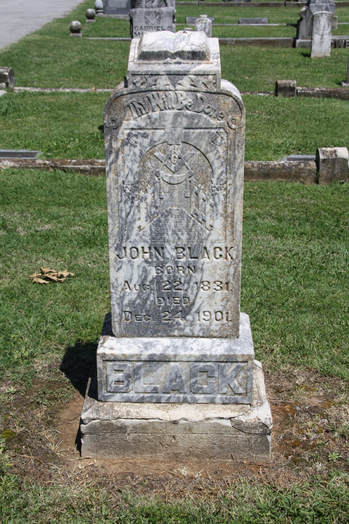