Rev. Peter Carnahan was born in Cane Hill, Arkansas, on October 9th, 1838. He was the son of Samuel Carnahan and Mary (Pyeatte) Carnahan. His grandfather, Rev. John Carnahan, was one of the first preachers in Arkansas  starting in 1811. He was believed to have started the first Sunday school in Arkansas at Cane Hill in 1828.  Peter was one of twelve children by Samuel and Mary Carnahan. He grew up in Cane Hill and attended school there. At the start of the Civil
War, he was attending Cane Hill College. On June 19, 1862 while serving in the Confederate Army, he married  Martha J. Buchanan, the daughter of Rev. John Buchanan, a Cumberland Presbyterian preacher in Cane Hill.

Soon after in 1862, he joined the Confederate Army. He was quickly promoted to the rank of third lieutenant under Captain Buchanan’s company. In short time he was again promoted to second lieutenant of Company B, Thirty-fourth  Arkansas Infantry. After the Battle of Prairie Grove he was promoted to adjutant until the war was over. He saw action in the battles of Oak Hill, Prairie Grove, and Jenkins' Ferry. Whenever he had the opportunity he would preach to his comrades in arms.

After the war he returned to Cane Hill and became ordained in the Cumberland Presbyterian Church in 1866. He farmed in the Cane Hill area and also preached at Pleasant Hill and Cincinnati.

In 1870 Peter was called by the Cumberland Presbyterian Church at Bentonville. He preached his first sermon there in November 1869. Rev. S. H. Buchanan asked him to preach the sermon and later in the day he met with the board which offered him the post which was being vacated by Rev Buchanan. At that time the C. P. Church was the only church to have been rebuilt since the war. During the Civil War all the churches in town had been burned to the ground. The Presbyterian, Methodist and Baptist all used the same church building, just at different times. Some people attended all three services. He served as pastor to the church in Bentonville for 14 years. In 1884 the Bentonville congregation was divided, and Rev. Carnahan took charge of the new congregation, known as Wood’s congregation, the church being about two miles east of Bentonville. During his time in Benton County he preached over 5,000 times. He was also in charge of the Mount Vernon (on Pea Ridge) congregation. That church became known as “the Carnahan church”. He also helped to reorganize churches at Sulphur Springs, Hic (now Siloam Springs, Old Union (now Lowell), New Hope (now Rogers) and Maysville.

In 1877 Rev Carnahan was employed by American Bible Society to try to place a bible in ever home that didn’t have one. They were sold at cost to those who could afford them, and given to those who couldn’t. During this time he helped place about 3000 bibles in homes. It also allowed him to preach to communities who didn’t have a preacher.
He retired in 1915 after 45 years in the ministry. He was one of the one the best loved and most respected ministers that ever served the area. He had a good farm of 94 acres, and was a Democrat and a member of the Masonic fraternity. At one time in the 1900’s Bentonville had named a street after him. He never made a lot of money but was able to provide for his family and help others. Mr. and Mrs. Peter Carnahan had seven children. He passed away Nov. 9, 1926, and is buried in the Bentonville Cemetery. At the time of his death the newspaper credited him with having married more couples than any other pastor in the county. 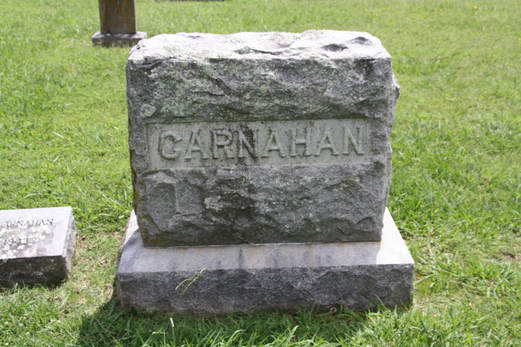