Cave Springs Bank Robbery Recalled
By Billie Jines
Article from the Cave Spring Scene August 5, 1971 (now the NWA Democrat Gazette)
​
Shortly after World War I, on a summer day around noon, the folks of Cave Springs were placidly attending to their own quiet business, when an incident occurred that jolted this and surrounding communities, and made such an impact that some present-day residents still recall cleary many of the details.

The incident was the Cave Springs bank robbery.

One of those who remembers exactly where he was and what he was doing is Guy Philpott of Cave Springs. He had just purchased a hay baler, he recalls, and had gone down to help Bob Allen bale hay.

He thinks the year was 1919. As he remembers it, the horse ridden by one of the two robbers, reared up and broke his bridle bits and reins when the robbers threw a cornmeal sack of silver on him. The bridleless horse tore off westerly, and a frantic robber tore out after him.

​Philpott says that it was Biff Bowles who ran out and retrieved the sack of silver. And the sack, Philpott says, had been purchased the day before from Stewart's grocery store. 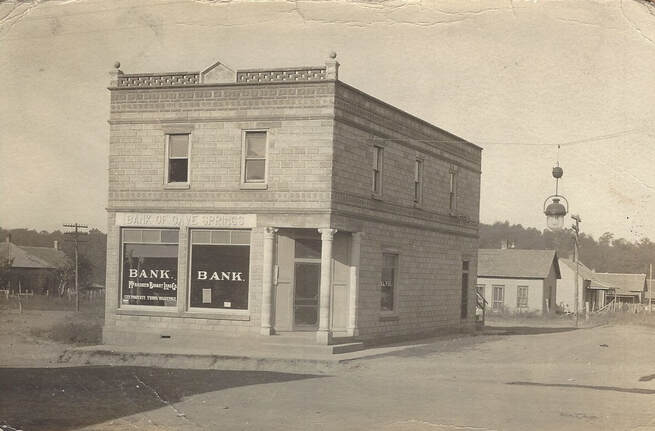 Early 1900's photo of the Bank of Cave Springs
The streets and roads were somewhat different in those days, but as Philpott recalls it, the robbers left town (one on the bridleless horse) and went under the railroad bridge (near the site of today's Healing Springs Rd.) They are reported to have picked up their rifles hidden there and then to have ridden west as far as the first crossroads, then known as Red Cut. There they turned south, cut the telephone line and hit for the "hollers". They were seen at Lick Branch about dark - and so far as anyone knows, were never seen again. At least not by anyone who identified them or was in a position to arrest and charge them with the robbery.

One former resident of Cave Springs, Dean Allen of Springdale, was a chunk of a kid at the time and admits that he may have forgotten or gotten the story mixed up, but here in short, is the story of that robbery as he recalls it:

"I was out in the field helping Papa bale hay, and all I saw of the robbers was a glimpse of them when they got their directions muddled and ended up at the gate of our field. But hearing the yelling and sensing excitement, I sure didn't just stay there in the field and bale hay. I hit it for town a hop and a jump away to see what had happened.

"The way I understood it, it was a teenaged boy named Evelyn Stroud, who first caught on that a robbery was taking place.

"Stroud scooted right down the street and tried to break the news to the crowd gathered in the store. Maybe Stroud had pulled tricks on them some time, or maybe it just sounded like a good idea for a trick. At any rate, the crowd just laughed at him. That is, they started laughing, but a yell 'bank robbers' from up the street made them realize that the boy was not joking.

"They all left Stroud and ran. They got to the sidewalk in time to see one of the robbers run out and throw a big bag of silver on one horse. The horse reared up and broke his bridle. The robbers caught him down the street and headed for what they thought was Healing Springs. Only they were on a dead end street that ended at our farm a couple blocks away.

"The robbers turned their horses and rounded the block to hunt the right road. On the next street, an elderly woman, "Aunt Kate" Grimsley, came running out on her porch. She shook her fist at the robbers and said, 'You boys take that money right back where you got it.' The robbers never slackened their speed, but one yelled over his shoulder, 'Old woman, get back in the house!'

"When I arrived on the scene, Mr. Hurd, the banker, was holding the broken bridle in his hands. I seem to recall that he or someone later hung that bridle on the inside of the bank, and there it remained as long as the bank was in business.

"The men and some like me. who thought they were men, began forming a posse to chase the robbers. They didn't know then that the robbers were already being chased by the man at the produce. The produce owner was riding right after them snapping his .32 at them, but by the time he reached the Osage, he was so mad that the gun had not yet fired that he threw it in the creek and headed back to town.

"The posse soon lost sight and scent of the robbers​. However, the telephone operator had calmed her nerves enough to phone ahead to Healing Springs to spread the word. One brave soul there ran into the road and fired at the robbers. The robbers fired back, and the man's courage evaporated. The last that was seen of the robbers they were heading straight on into the Cookson Hills country of Oklahoma."
The Robbers Bragged
Mrs. Murlin Bright, who was the former Gladys Ford, remembers that it was reported at the time that when the robbers passed the crossroads, they saw an elderly man known as "Uncle Henry" Osborne. One of the robbers is said to have yelled: "Uncle Henry, we've got the Bank of Cave Springs with us!"

She was just a girl at the time, but Mrs. Bright understood that the robbers only called Osborne "Uncle Henry" in jest, not realizing that it was his name.

Carl Shores also believes the robbery occurred about 1919, or maybe, 1920. He agrees that the robbers were never caught.

Edgar Barnes agrees that the robbery took place about 1919. He knows he was in the field threshing and heard about it when he came to the house for dinner.

He thinks the sack was a two-bushel beansack, and that the robbers had apparently been in town casing the bank at which time they acquired the sack. It was imprinted with J. M. Stewart General Store name, he recalls.

As Barnes heard the story, J. W. Hurd, the banker, was at the teller's window writing when one robber stepped in and told him to throw up his hands. A jokester at heart, Hurd is said to have quipped, "Which hand?" The robber let him know that the matter was no joke. At that moment, the other robber, Barnes remembers, caught sight of Hurd's son, Bill, at a desk.

​It was Oscar Pattishall, Barnes thinks, who threw his pistol in the creek. The story went that Pattishall borrowed an old gun from Biff Bowles, took out after the robbers, and when the gun kept misfiring, Pattishall threw it into the Osage, saying "that gun is going to get somebody killed."

​He also remembers about the robber yelling at "Aunt Kate" Grimsley, telling her to get her "old gray head back into the house." Mrs. Grimsley lived in the house presently occupied by Mrs. Bess Evans, he said.

Barnes believes that the silver, which the robbers failed to get away with, amounted to about $800.00 and that they may have gotten maybe $1,500.00 in currency.
Banker's Son Remembers
J. E. (Edwin) Hurd was just a boy when the robbery occurred. While his brother, Bill, was working at the bank with their father, he was out in the front yard with his mother, he recalls\ed the other day. The family lived two or three houses south of the bank, and J.E. recalls seeing the robber's horse break and run after the silver was thrown on its back.

He also remembers hearing that the robbers cut the telephone line, also that they stood up on one of the horses to do so.

J. E., who is now principal of the Middle School in Rogers, remembers, too, that while everyone was in the street during the excitement, his brother, Bill, tried to go back into the bank, only to be stopped short by a robber.

J. E. also recalls that while the robbers were never apprehended, their picture s were identified by his father as being Buck Davis and Blake Cookston.

Hurd said that after leaving Cave Springs, his father was with the Bank of Decatur. Both Mr. and Mrs. Hurd are now deceased, as is Bill Hurd.

The first cashier of the Bank of Cave Springs was Homer D. Reams. Other bankers who served the bank here included a Mr. McDaniel, Mr. McAndrew, Paul Martin, and the last one here was Troy Butler, according to Shores.

Shores pointed out that the Bank of Cave Springs actually occupied different sites here. It first occupied a building on the corner now occupied by the Community Building, later moved to a portion of the building now occupied by Whitlow's Grocery (or maybe a portion of a different building that stood there), and finally to the one that now makes up almost half of the Shores Hardware and Propane Service. The Shoreses later doubled the size and enlarged the bank portion of the building still further west by an addition. The old bank records, stationery, etc. are stored in what is an upstairs section of Shores Hardware and it was from these that Carl Shores got a copy of an old Bank of Cave Springs ledger sheet and counter check for use in this special edition.

The cost of the building, according to old records found by Shores, was $2,800 in 1910. Like Shores, Barnes recalls the bank also occupied two previous sites: first where Whitlow's Grocery now is and later where the Community Building stands.

Barnes said that he helped lay the blocks in the last building the bank occupied, where Shores Hardware is today. He and Tom Graves worked together, getting $1.25 per 10-hour day, he said . That was in 1910, but the bank had been organized in 1907 or 1908.