Cave Springs Community Rich In County History
By Katrinka Vanderpool  - Published in the Benton County Democrat (May, 1936). now NWA Democrat Gazette
Before the days of luxurious transportation, when people wanted more room, they went "a pioneering."

Some of whom made the present day Cave Springs their choice to abode; a different Cave Springs with its now beautiful lake, good roads and modern conveniences.

There were the Cannons, the Pattishalls, Strouds and Allens among the pioneers who were farsighted enough to see the possibilities of the place. A post office was established which was called "Cannon post office." The first post office was operated in a home and mail dispatched on horseback.

One of the first mills in the county was built near Cave Springs. A water mill was operated near where part of the lake is today. George Robbins was the first operator. It later passed into the hands of "Old Uncle" Elijah Allen, a pioneer from Tenn. The later owner was J. W. Stroud, father of H. L. Stroud, a present day merchant. 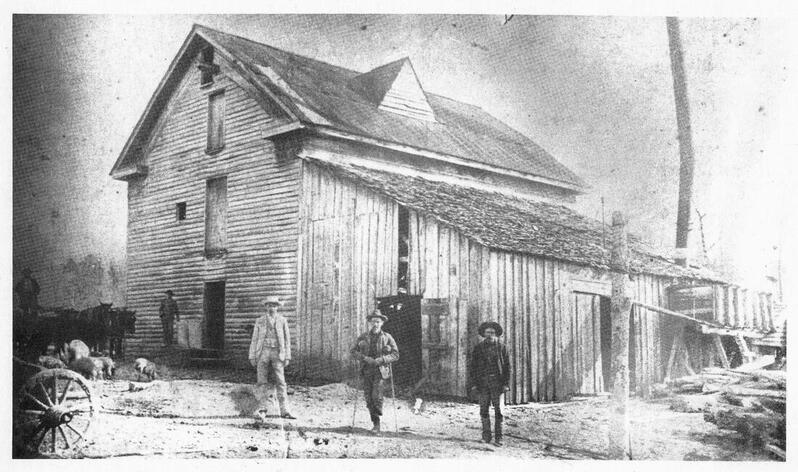 The Allen Mill at what was later Cave Springs. It was built on the north side of the lake in about 1890. Left to right in the picture, Jones Scoggins, Frank Goodrich, Nate Maxwell, Lige Allen and Henry Gaston.
A grand character is Aunt Kate Grimsley, who can tell interesting and exciting incidents of the early days of Cave Springs. One story she relates before "the war" was that her father had started to have some blacksmith work done, leaving his wife and children at home.

After they waited and he did not return a search was made, only to their sadness they found the "bushwhackers" had captured him. He was never found.

Aunt Kate is now in her eighties, and except for a short time spent in Cassville, Mo., has spent her entire life in Cave Springs.

As time went on, more up-to-date stores were built. The operator of one of the first stores was John Sandusky. The first school was a log house, called by its students "Stick in The Mud."

The Baptist Church was organized years ago and the first location was on the hill near the present Mrs. John Clements' home, near the old Walls Water Mill, which is still in operation on Osage Creek.

The Hollands, Smileys, Brights, Murdocks, Jones and McClures were also early settlers near Cave Springs. As time went on more settlers came. Romances came and families were united. One of the first modern livery stables was operated by the present day Will McDaniel, father of a Cave Springs business man of today.

The country began about 1900 to develop the now universally known Arkansas strawberries and apples. With no modern day trucking conveyances a need for a railroad was felt.

​In 1906 the dream became a reality and was known as the Rogers Southwestern. One depot agent was E. D. Kelly and another by the name of Davis. The contract on the railroad for the grading work was done by R. G. McGehee, who also was the first man to see the need for an incorporrated town, and laid off town lots along the railroad. 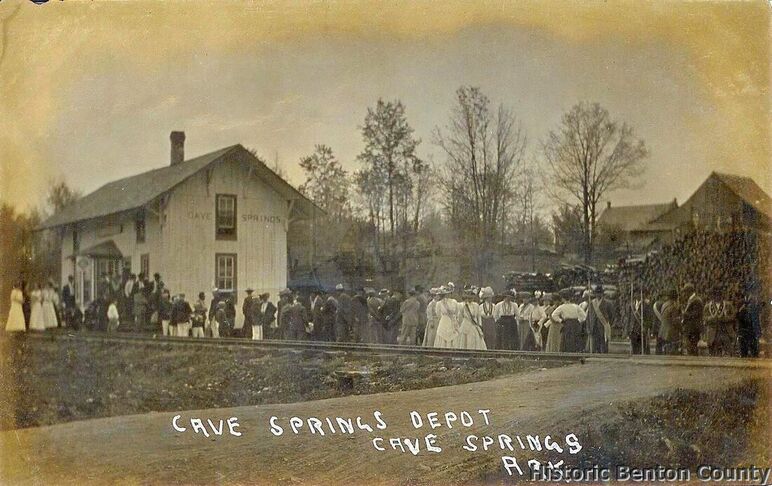 This image is of the dedication of the Cave Springs train depot.
A hotel was built and operated by Doc Beard. Shortly afterwards the post office name was changed from Cannon to Cave Springs.

As time went on there developed another industry which became one of the greatest in the country, that of the boiler business.

The first telephone system was about the time the railroad was built, by John Shaeffer, who also taught school in Cave Springs. The present system is owned by Howard Deason, and operated Mr. and Mrs. Wilburn Oakley, who are descendants of the earliest settlers.

Among the later day citizens came Dr. E. J. Highfill, known throughout Northwest Arkansas for his deeds of mercy, his skillful practice and his "Fox Hounds."

W. M. Barltette became owner of the Spring property and build a dam which created one of the best swimming pools in America.

​As the trucking industry grew and automobiles became prevalent, business on the railroad declined, until finally it was discontinued in 1917. 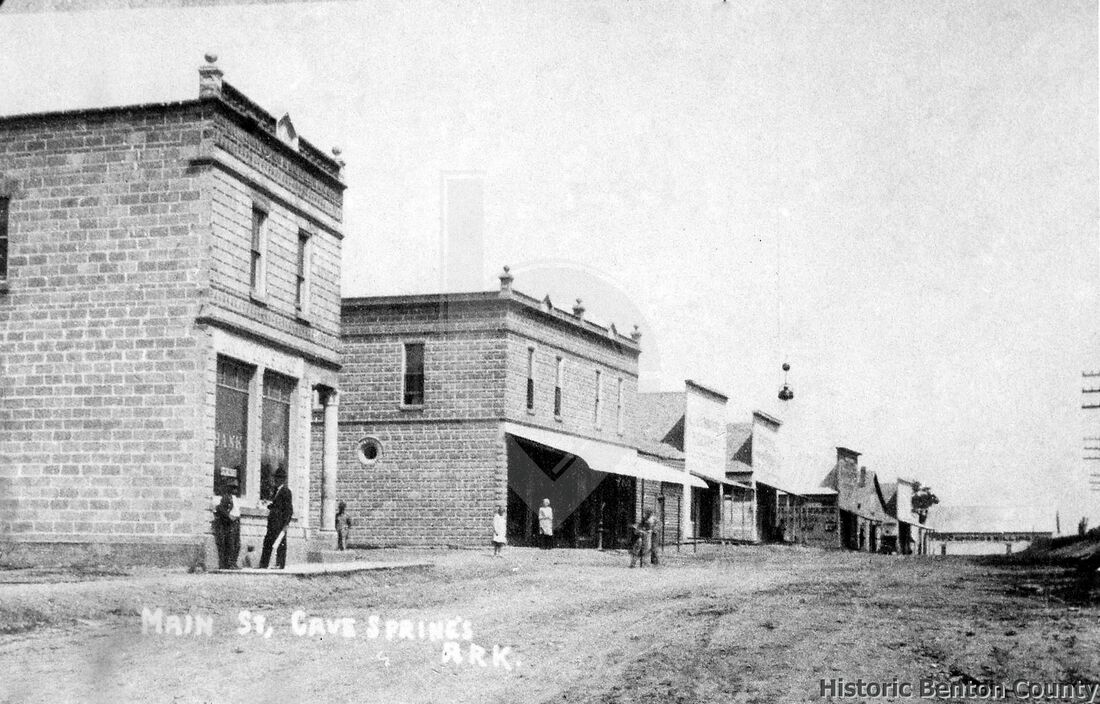 Early 1900s view of downtown Cave Springs
A large community building, which is used for all public gatherings and recreation. We enjoy the conveniences of up-to-date groceries, dry goods, hardware and drug stores.

And Cave Springs is one of the largest produce centers in Northwest Arkansas.. We also have a canning plant that adds to marketing facilities and supplies employment for many. We have an up-to-date flour and feed mill, filling station, garage, and other stores.