Carl Starck Pioneered Wine Grape Growing in Hills of North Arkansas
This is probably from the Rogers Daily News, now the NWA Democrat Gazette, year published unknown
One of the most colorful and interesting charcters who has lived in this section of Arkansas was the late Carl A. Starck, who made his Vinola Wine ranch, six miles southeast of Rogers near the Panorama hill on White river, nationally famous and brought visitors there from all over the United States.

Known best perhaps to citizens of Rogers in his later years because of his having kept a complete weather record for nearly half a century, he became famous in the [18]90's for his success in growing wine grapes and in making wines that won medals at the Chicago world fair in 1893, at numerous later expositions, and in far off Vienna, Austria, where wine making was supposed to have but few rivals in the world. 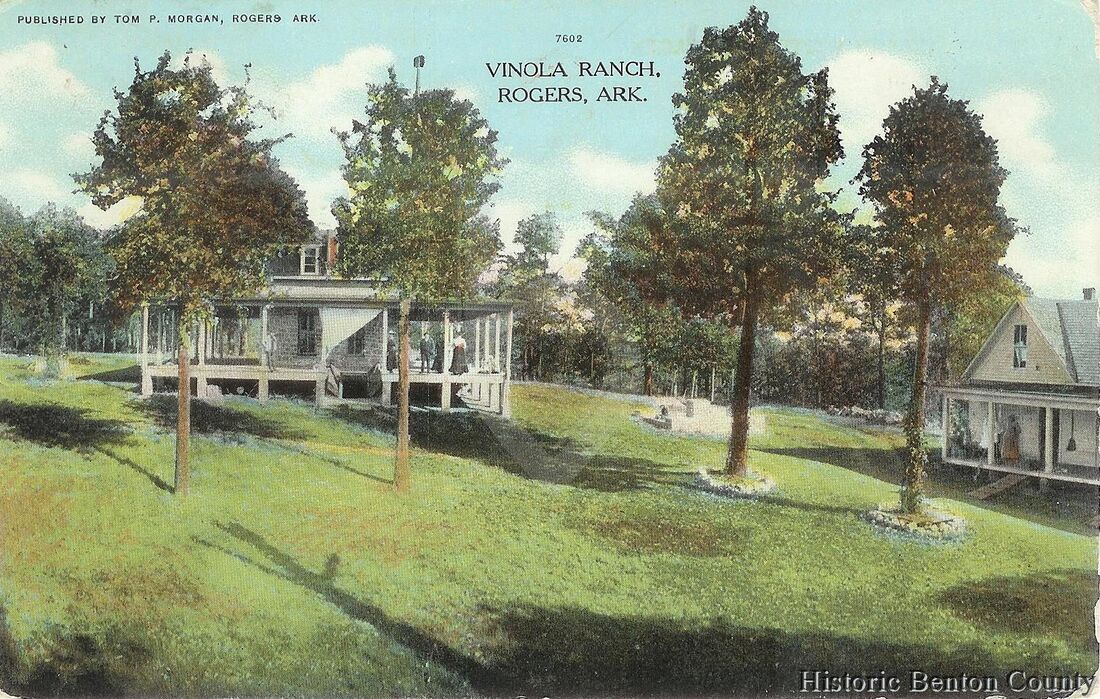 A Haven for Tourists - Vinola Wine Ranch, where the late Carl A. Starck produced some of the finest native wines, was  long a show-place and one of the favorite spots for visitors to the Ozarks. Seasoned Ozark visitors were captivated by the freindly hospitality of the Starcks, who always dispensed generous samples of their products.
His parents were both born in Germany but came to the United States to escape political entaglements. They settled in Evansville, Ind., where Carl was born January 9, 1858. Choosing law for his life work, he received a liberal education there and in several universities. He was admitted to the bar in this state in 1893 but never practiced in the courts here or elsewhere.

Mr. Starck's father died at Evansville and his mother, who was exceptionally brillant woman, came with her sons, Carl and Arley, to Arkansas seeking a new home. When she saw the timbered hills along the White river she said they reminded her of her early home on the Rhine in Germany. They bought a large tract of land, much of it on the river and none of it far away. 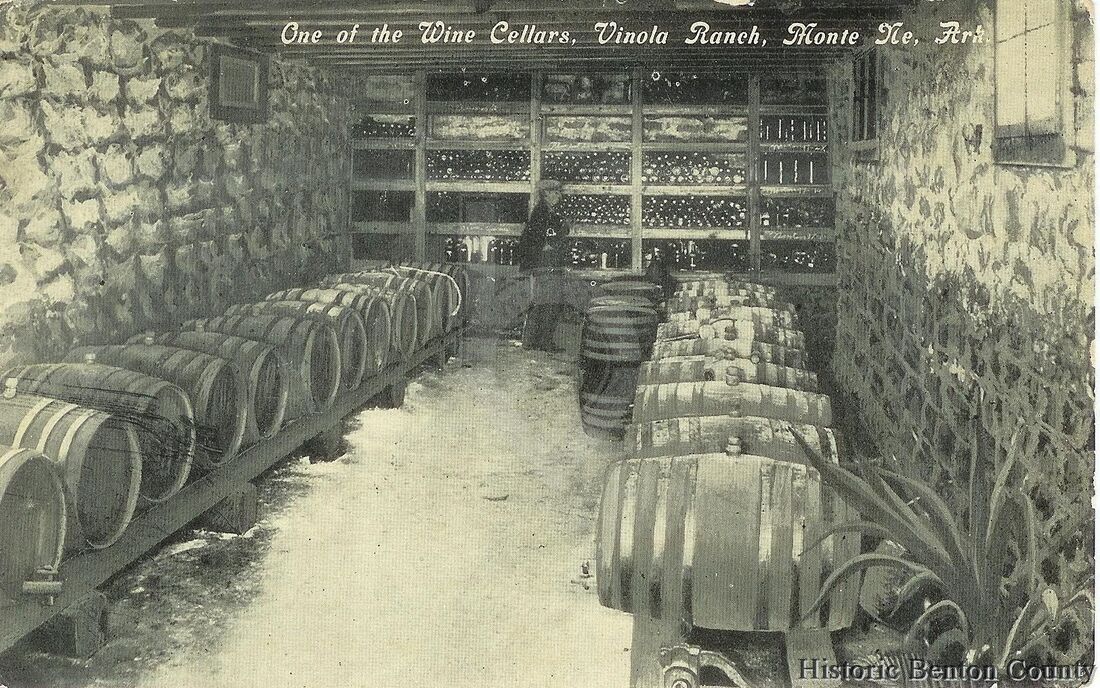 They located here in 1888 and although they sold the original home to J, Durr of Oklahoma City a few years before her death in 1934, they moved only a mile or two further up the river and "Grandma" Starck was still among her beloved hills. She missed the century mark by only a few years.

​Immediately after acquiring their Arkansas home, Mr. Starck began experimenting to learn just what grape was best suited for the making of wine. The juice content of a grape is determned very largely by the soil and climate and after many trials and tests he selected the Cynthia. After grafting and cross-breeding he found a grape that produced a blue ribbon wine.

Mr. Starck never engaged in wine making as a commercial venture but he did vision a day when Northwest Arkansas would be a wine manufacturing center on a large scale. He shipped wine to other states at times, but sold very little locally. When Arkansas voted dry in 1915, he gradually allowed his vineyards to die and seemingly lost all interest in the industry. 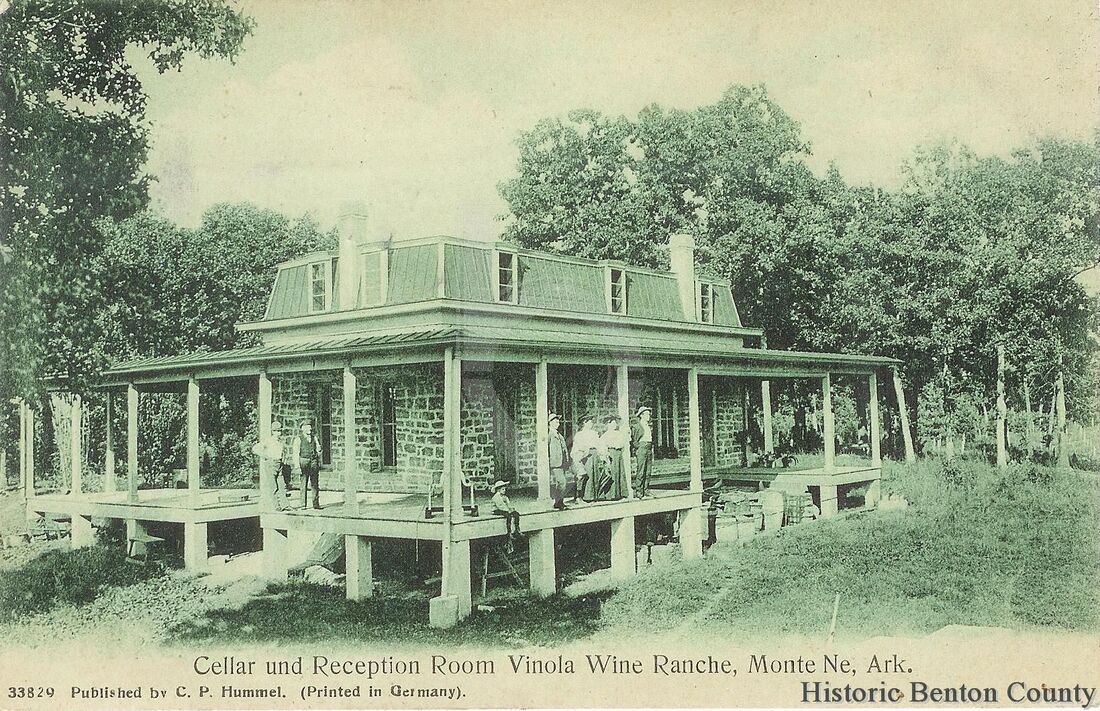 He married rather late in life (1906), marrying a former Evansville schoolmate, Lulu Mae Durham, a nationally known missionary secretary, who returned to her former home a few years after Mr. Starck's death, November 7, 1939, at the age of 81.

Studious by habit and retiring by by disposition, Mr. Starck did not participate in local politics and was unknown to a great majority of our people. To one interested in sampling the home possibilities of the White river country, a visit with Mrs. Starck, and with "Grandma" Starck, was a real pleasure fraught with fellowship and worthwhile local information.

He devoted much time and work to his government reports on weather and they were recognized by the federal bureau as among the most accurate and best kept of any of its volunteer workers. Until the location of a weather bureau at Bentonville his records were the only ones availiable for Benton County. When he died in 1939 his records covered a period of 44 years without a single break. 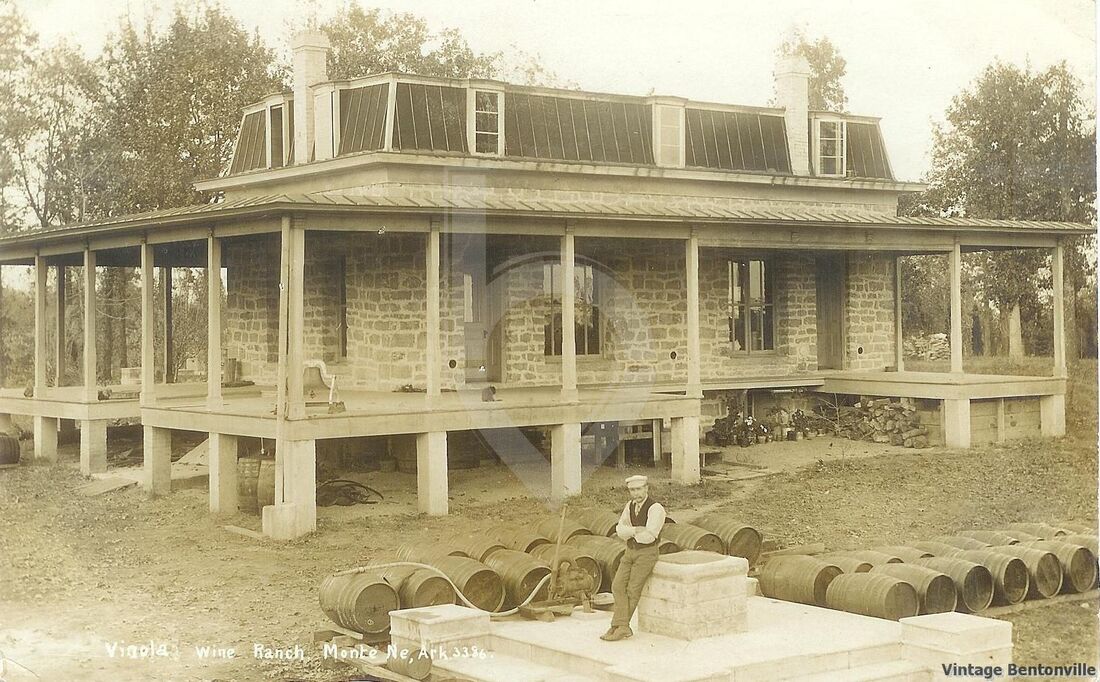