This letter was recently acquired by Vintage Bentonville, it was written April 21, 1861, by Dr. Clement B. Hayden of Maysville to William P. Hayden, a nephew who lives in Maine. It was an uncertain time in the state, as you will see in the letter. Also included is a second letter which is from Dr. Clement's daughter to her cousins up north. These letters were written a little less than a year before the battle of Pea Ridge took place.
Letter #1
Maysville, Arkansas
April 21st, 1861

Yours of the 24th of March came to hand by due course of mail. I was very glad to hear from you though I had to study some time before I could make out who you was. I had forgotten that I had a nephew of the name of William P. Hayden - especially one 34 years old.  I now remember a little fair-haired boy running about John's on the yore. I suppose you are the one. I had even forgotten your name. You had never written to me [and] neither had any of your family. I had heard of the death of your father and the marriage of your mother. That is about all I have heard about any of you in twenty-four years. Don't wonder then that I had forgotten you ("go and sin no more no more").

I had written occasionally to brother Mahlon D. Hayden but seldom got an answer. I have not heard from him in more than two years when I received your letter containing the sad tidings that he was hopelessly ill. I had written to him about six weeks before I received yours and was anxiously looking for a letter from him. But alas! How uncertain is all things earthly. I receive the news from you that he is dying and that I shall hear no more from him on earth - that likely even now now while I am writing he is lying in the cold embrace of death. May we meet in Heaven to part no more. If I knew that he was still alive and that I could reach him before it was too late, I would start immediately to see him. I could reach there in ten or twelve days. As none of Mahlon's family have written to me and you make no mention of my letter in yours. I presume it has not been received. I would start for Maine in a few days if I knew that brother was still alive although my family was opposed to my leaving them in the present unsettled state of the country.

Secession has turned everything wrong side out. It has paralyzed all business - made every man, woman, and child feel unsafe & terror stricken. When we go to bed at night, we don't know but we shall be murdered, robbed, and burned out before morning. When, where, or how it will end, God only knows. My only trust is in Him "who pulls down Kingdoms and builds up Kingdoms according to His own good pleasure."

We have just heard of the bombardment and surrender of Fort Sumpter [Sumter]. All is the wildest excitement. If the Arkansas Convention was in session, it would secede before night. The South will all oppose Old Abe's Coercion Policy so likely you will hear that I am a citizen of another government before this reaches you. My heart sickens at the recital. I turn away in sorrow and anguish. Oh my unhappy and distracted country -- "tis for thee I mourn." I would be very glad indeed to revisit the home of my childhood and the scenes of my youth and after all my wanderings "to return and die at home at last." I would like to see the old homestead again, rest under its sacred roof, trace the wanderings of the brook to its source, beguile the wily trout with the older rods, mount to the top of Hemlock Hill and gaze upon the surrounding landscape and the placed lake at its base on whose peaceful bosom I have so often sported, both when its tranquil water reflected the bright effulgence of the summer rays and when the cold nights of winter had turned its surface to ice and glided over its crystal bosom on skates, contending even with the wind for fleetness. While reflecting on these scenes I almost seem as a boy again in the very freshness of merry youth.

Tell my brother (if living) that all my sympathies are with him - all a brother's love is tendered him. But tell him there is no one dearer than a brother - one that will go with him through the dark valley. When brothers falter and fall back. He will lead him onward upward to eternal day. May we all feel Him precious in this our great trial. May we know on whom we have believed.

​Give our love to your mother, brothers & sisters and all our connection and all my old friends & messmates that are still in the land of the living. Tell them all to write to me. I would be extremely glad to hear from them. I shall expect a regular correspondence from you now you that have got the ice broken. Tell your sisters to write to my girls: Florence L. Pace (married), Loretta A., Lucy J., Emma E., Mary Angeline, or to my boys Clement Jr., Thomas Herbert, and Edward Payson. You need not say you have nothing to write. Give me a history of every person in your neighborhood - particularly my old acquaintance and their children. I must quit for the want of space so goodbye for the present. Yours in L, J, & F. - Clement Hayden. 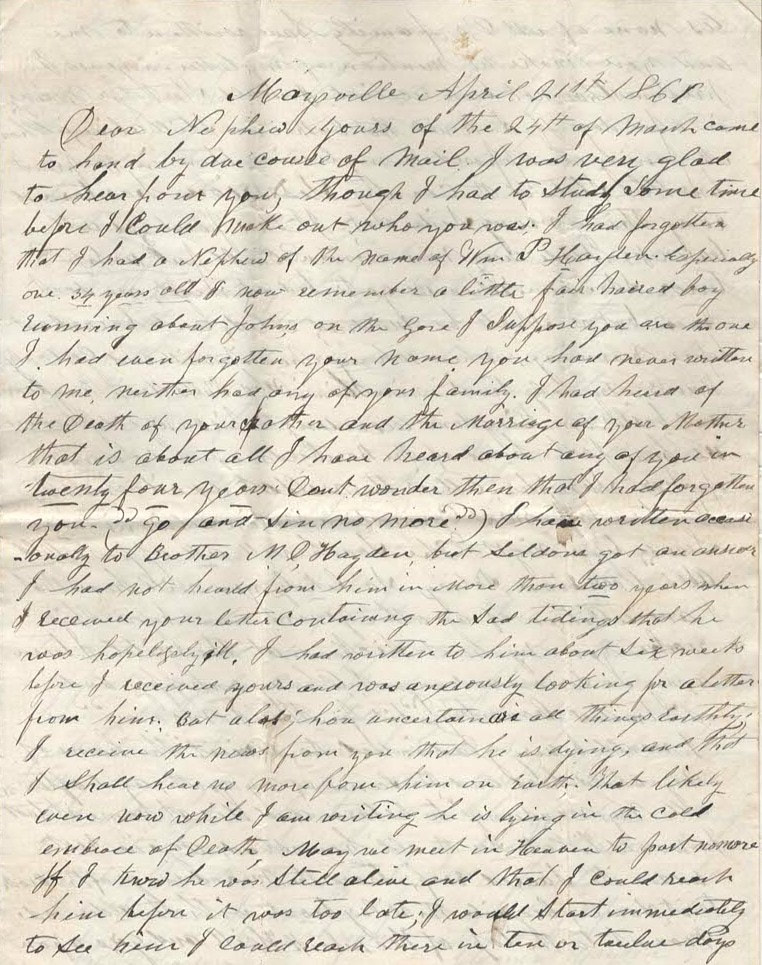 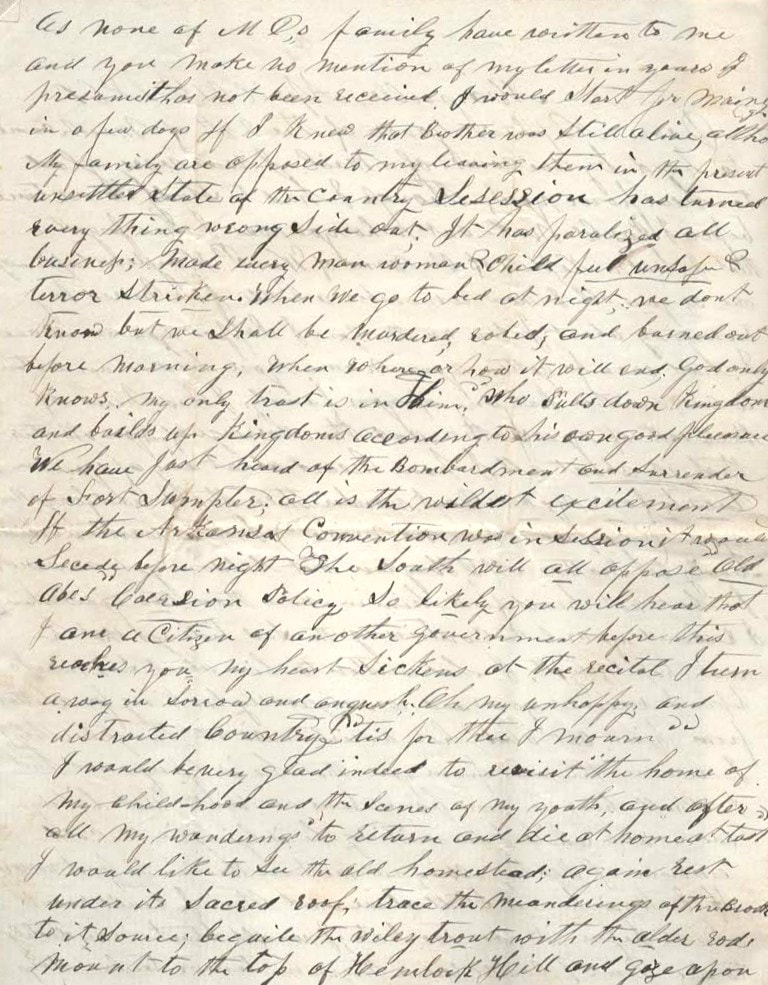 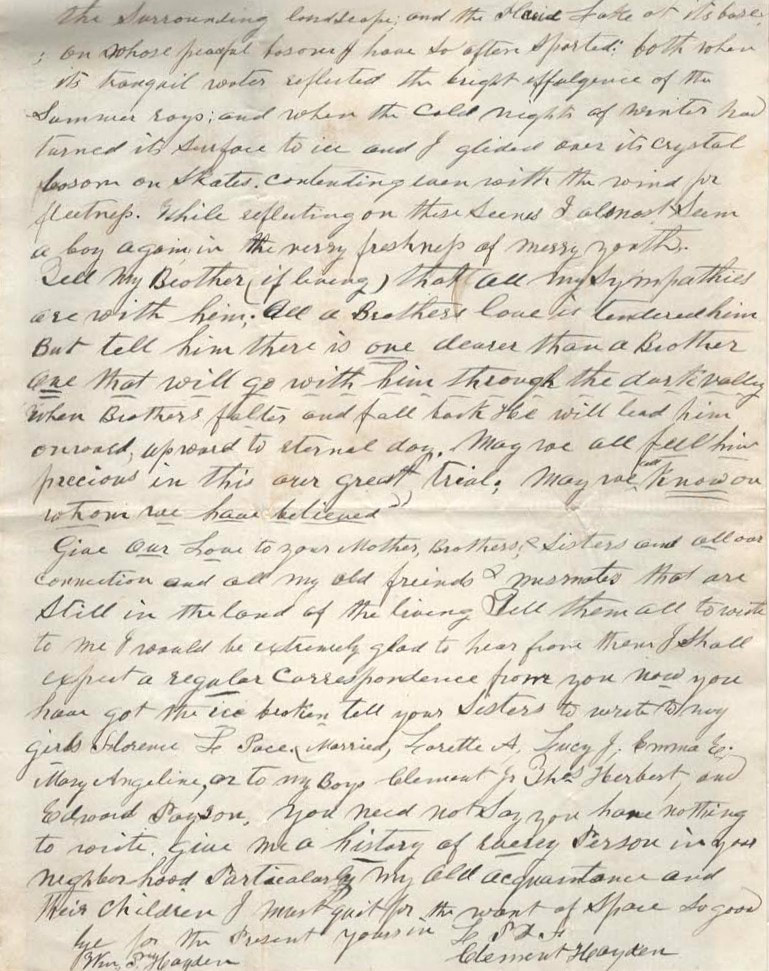 As Pa is writing you I will take the liberty of writing a few lines and introduce myself to you. My name is Lorette. I am just seventeen and they tell me not handsome. I am small of my age, light hair, blue eyes and - and - well, I do not know how to complete the picture so I will leave you to guess the rest. I am not very learned. Have never been more than 70 or 80 miles from home in my life. I begin to feel as if I were almost old enough to find me a home of my own but Pa tells me I should not think of such a thing for five years at least.

I should love so much to see you all. It would be such a pleasure to visit those dear old places I have so often heard my father speak of. What emotions would stir my heart at the sight of the house where my venerable grandparents lived and died - to view the spot where laid side by side they await the summons of the last day - that sweet spot that shelters their aged heads from the storms and toils of earth. But I fear I will never be permitted to see your country.

Tell your sisters to write to me. I would be happy to hear from them at any time. When you write to us, tell all about the family

Sister Florence is married [to John Harvey Pace] and has a daughter two years old named Lura Jane. I am the next oldest. Clement is fifteen, Lucy 12, Emma 10. Lucy and Emma are going to school at this time. I will close my letter. Give much love to all.

​Your Southern Cousin - Lorette A. Hayden 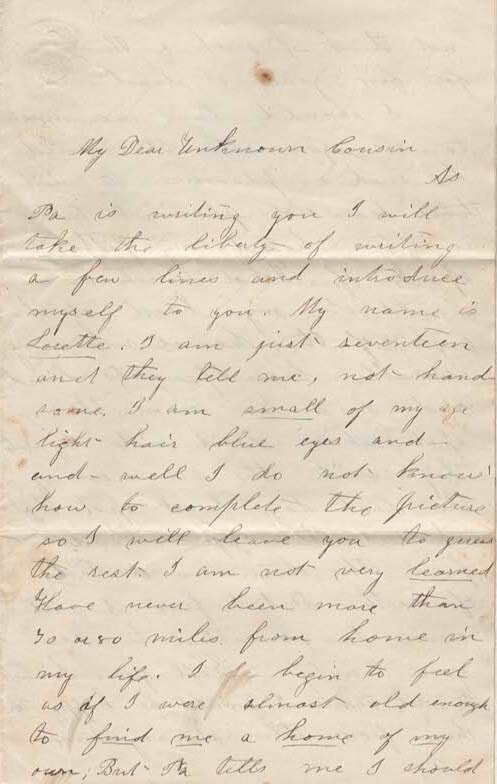 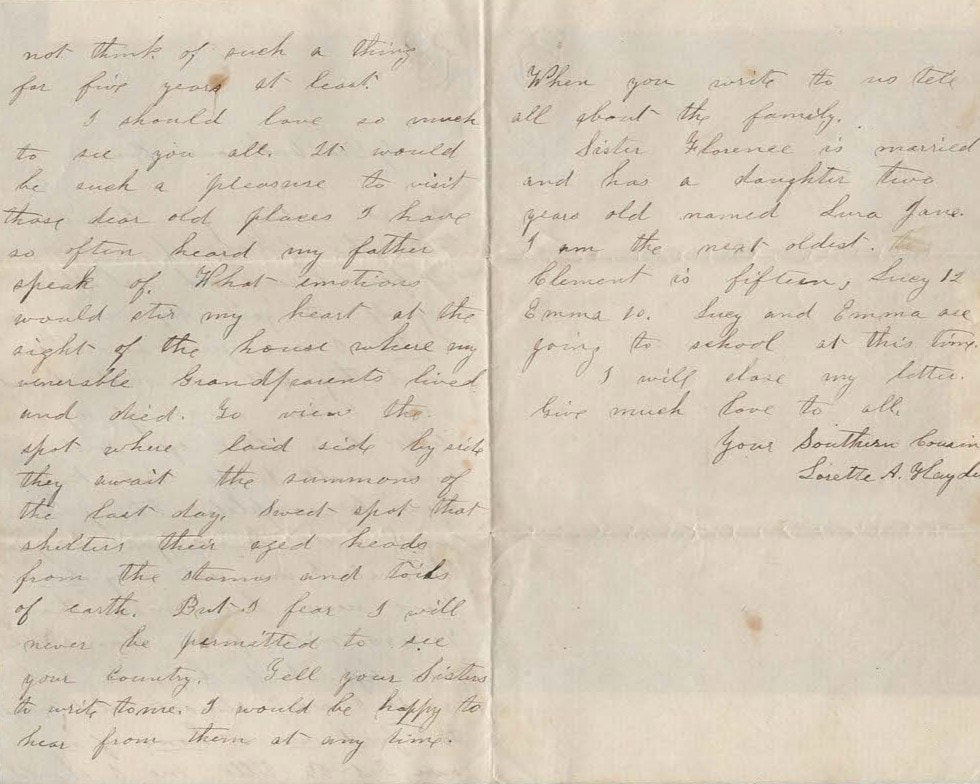