Author unknown, believed  to be from a 1950 issue of the Rogers Daily News, now the NWA Democrat Gazette.
In reviewing the life and activities of the late W. H. (Coin) Harvey, more especially as it relates to the Southwest, most observers will agree that his outstanding contribution to the entire territory was his sponsorship of the plans to bring into existence a unified system of good roads, definitely and plainly marked and maintained all the year around.

​Dating from 1913, the banding mark, "O. T." became a very familiar sight all over the territory covered by the activities of Mr. Harvey and his supporters. Some people credit Mr. Harvey with being the first to definitely mark and plan a connected road system in the United States. Be that as it may it was without doubt the start of the movement in the territory to the north and west of Rogers.

The story of the Ozark Trails movement is best told in a little folder issued in 1915 and scattered by the thousands in the states affected. The following is quoted from the folder:

"The Ozark Trails association was organized in 1913 at a meeting of good roads men, from four states, that met at Monte Ne, Ark.

"The plan of the association is to promote a system of good roads connecting the four states of Arkansas, Kansas, Missouri and Oklahoma, and to mark them so the travelers will have no difficulty in following the same, never losing their way and having no uneasiness of mind, as to the route, while traveling.

"W. H. Harvey, living at Monte Ne, Ark., a practical good-roads man, was induced to act as president and chief executive office of the association, and a vice-president from each of the four states was provided for, and a treasurer and secretary. The vice-presidents are: George Sengel, Ft. Smith, for Arkansas; J. I. Wolf, Burlington, for Kansas; E. J. Kling, Nevada, for Missouri; and Cyrus Avery, Tulsa, for Oklahoma; all splendid good roads men, with a public spirited reputation in their respective states...

"The mark designating the Ozark Trails is copyrighted and is a combination of the colors white and green and consists of a white field with a green stripe above and below, and O. T. in the center as appearing on the front cover of this leaflet. Usually it will be seen on telephone and telegraph poles and on trees and when there are none such to mark it on, may be found on fence posts and on rocks. At junctions where two or more of our routes come together, the junction is designated by three such signs on one pillar, pyramid or pole. When seeing this, one traveling should stop and read the directions that will be found thereon as to where the different routes lead.

This is one of the road intersection signs that was found in Joplin pointing travelers in the direction they wanted to go. 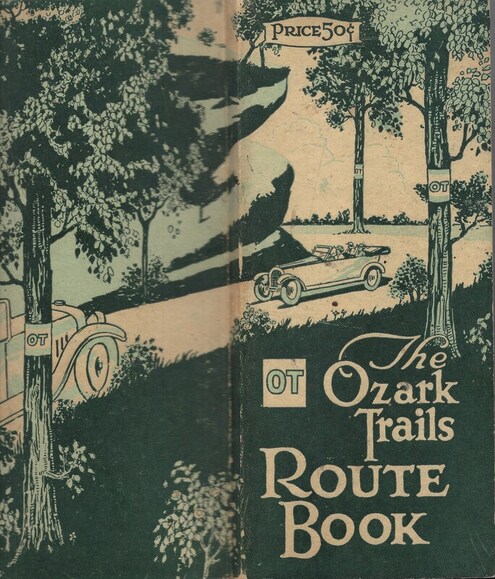 This is the cover of "The Ozark Trails Route Book" 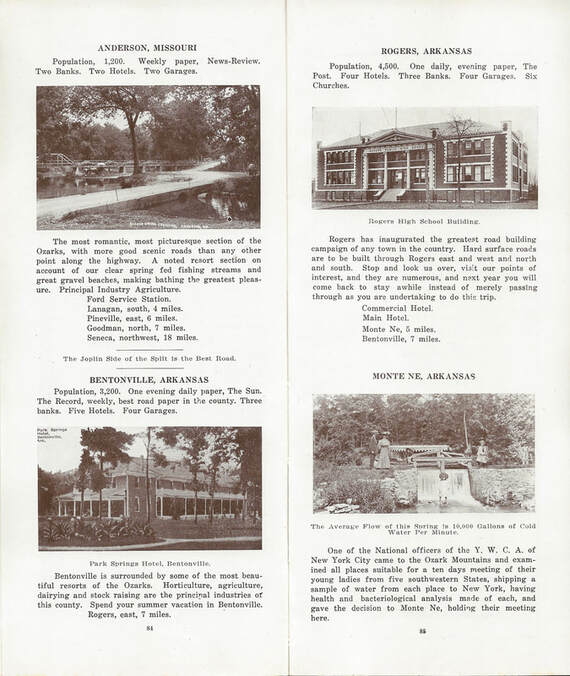 One of over 112 pages found in "The Ozark Trails Route Book
..."In establishing the Ozark Trails we select the best route, everything considered, and when marked, the fact that it is the best route and marked. causes it to become the main traveled highway. Therefore, it is a great benefit to the country through which it passes. The benefit of railroads through country and towns has long been recognized. A main traveled highway is, as a rule, of equal importance, attracting the traveler, the prospector and the investor.

"When a main traveled highway is established, it is only a question of time when it is made the best of roads. Population increases along its route, necessity and public sprit demands it improvement and it gradually becomes the best road.

National pikes are coming, it is only a question of time, and when they do come they will adopt the best traveled routes reaching the most thickly populated sections; which means that, in the meantime, the Ozark Trails, by being made a first class road, will attract the population and importance that will insure its adoption as a national pike. Hence, the Ozark Trails association is anticipating the future and is making road history now.

"None of the officers of the association charge anything for their services and receive no salary or pay. One of our by-laws says, "We deem it that no man is worthy to be an officer in this association who does not posses the public sprit that prompts him to give the necessary time to the duties of his office. In this connection it may be said that Washington gave eight years of his life to his country, during the revolutionary war, for which he refused any pay.

"The Southwestern Automobilist. published at Joplin Mo., is the official organ of the association. Each member of the association gets it free and through it we keep more or less in touch with what is being done on the Ozark Trails. If you are a member and not getting it notify Charles W. Fear, secretary, Joplin.

"We rely on two sources for the expense incurred in promoting, routing and marking the roads. One is for local commercial clubs and others, respectively, to take care of the expense of routing, marking and promoting in their neighborhood when the officer in charge arrives for that purpose. Our expense, however, covers many details, including printing, postage and traveling, and for this we depend on the members of the association paying $5 annually...

"The Ozark Trails is joining together in homogeneous friendship the citizens of the four states of Arkansas, Kansas, Missouri and Oklahoma, promoting the happiness of the people and the progress of the country through which its system of good roads passes. All points on the routes are benefitted. Each town and each community that the road passes in and out of is benefitted. It is a mutual proposition...