The first organized reunion of the Confederate Veterans was held on July 9, 1887, at the Pea Ridge Battlefield. The reason for the meeting was to unveil a monument on the battlefield honoring the Confederate dead and to pay respects to the three Confederate generals who died in this battle. There were also former Union soldiers at the event who asked to be involved in honoring the dead. The monument was paid for by the people of Benton County, with some coming from former Union soldiers.

The welcoming address was given by Col. Sam Peel, then a member of  the U.S. Congress from Arkansas. The main address was given by former Lieutenant Governor Francis Lubbock of Texas. He talked of the bravery of both the Blue and the Gray during the battle. This meeting later became known as the first reunion of the Blue and the Gray. They planned to meet annually to honor those on both sides who gave their lives at the Battle of Pea Ridge. At the end of the reunion a committee was appointed to plan future Blue and Gray gatherings. The committee was made up of half former Union soldiers and half former Confederate soldiers.

In 1888, the Blue and the Gray reunion was held at Pea Ridge Battlefield Oct. 16-18, 1888. They camped by the best spring near the Elk Horn tavern. The main program was held where the monument had been placed the year before. Over 2,500 people came to the event from seven states. Thirty-five beautiful girls gave a dance presentation entitled "Secession and Reunion". In the evenings, the soldiers would sit around the fire and tell tales of the battle.

The next reunion was held Sept 3-7, 1889. Even though the event was almost rained out, they had a record 7,000 people in attendance. A monument was unveiled during this event called the goddess of Liberty, dedicated to a "United Soldiery".  The monument was presented to the Blue and Gray by the artist, Miss Daniels. This was her first work. It is the second of two monuments that can be seen at the Pea Ridge Battlefield today.

The next reunion on was held Sept. 8-10, 1890. There were not as many overall people attending as the year before, but a lot more soldiers were in attendance. During the three day event there were 20 bands who came and played.

From this reunion, the Northwest Arkansas Confederate Reunion Association was formed in 1891. They chose Bentonville as the town to hold their annual reunions. The first reunion organized by this group had about 2,000 people in attendance. At the beginning of the first day, they had a large parade.  There were about twelve bands, a few floats, and around 350 Confederate veterans. Each day after that there would be a parade of the ex-soldiers coming into town.  The newspaper had very little coverage of it. The speakers of the day were James H. Berry, Gen. W. L. Cabell, Col. M. E. Benton, Col. T. M. Gunter, Col. Bob Crockett, and Hon. Hugh Dinsmore. A large group followed the veterans to Spring Park where a large campground had been set up for the men and their families.

The next reunion was held in Bentonville Sept. 27-29, 1893,Wednesday to Friday. This was the largest of any reunion ever held locally with an estimated 10,000 to 15,000 people attending. This event was hosted by the National United Confederate Veterans Association. A campground had been set up at Spring Park which was called the Camp Cabell Confederate Post in honor on one of the confederate officers, Gen. W. L. Cabell. The men were fed what was referred to as "hog & hominy." Confederate soldiers came from 17 states to attend this event. A parade, which started in the front of the Methodist Church, went through town, around the square, and proceeded out to Spring Park. The parade began with a band out of Rogers which was followed by floats, including one with local girls representing each state of the confederacy. There were 15 total floats total in this parade. There were 7 fire carts with men pulling them and many other bands. Next followed the Confederate veterans on foot, horseback, and in buggies. At the end of the parade, everyone else who came to watch the events of the day fell in behind the veterans. As they reached Spring Park, Alex Black's first regiment band played for the arriving crowd. Senator James Berry gave the opening address to all who had came. The main speaker for that day was Hon. Edgar E. Bryant.

The reunions were held for a number of more years, but as the soldiers began to die off, the reunions eventually just stopped

Story attributed to the writings of J. Dickson Black 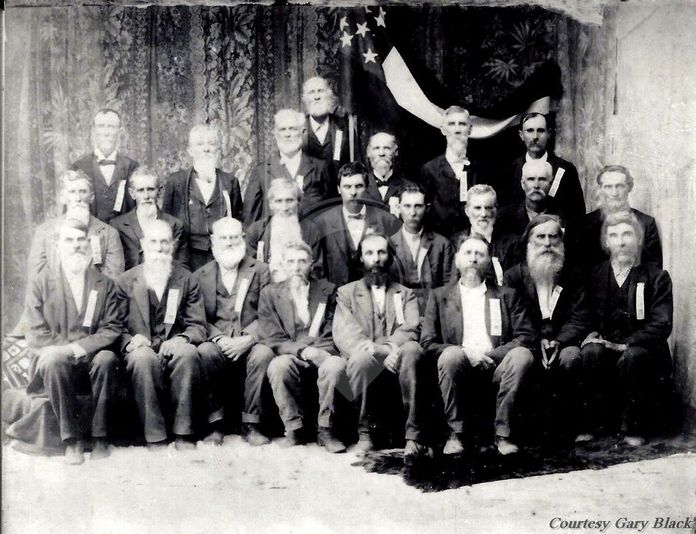 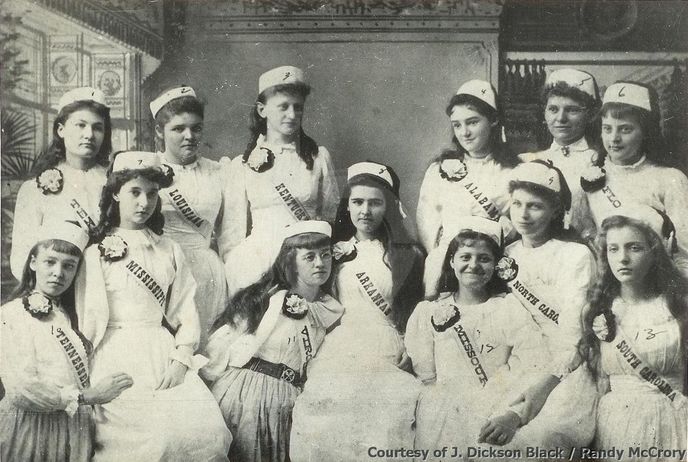