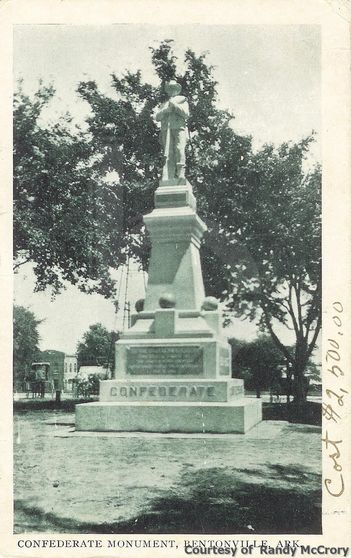 The Benton County Sun – July 30, 1908
Monument Paid For – The last dollar on the Confederate monument which is to be unveiled Saturday was paid yesterday. The fact that the last dollar was paid before the unveiling was due to the individual efforts of Senator Berry who has been very much and actively interested in the monument all the way through. It is a source of great pride to the grand old veteran to know that one of the best monuments that has been erected in the south to the memory of the brave dead of southland soldiers is to be unveiled in his home town and was able to assist so much in the work. Senator Berry and Ladies and Daughters of the Confederate veterans have a right to feel proud in this great accomplishment

The Benton County Sun – Aug 6, 1908
Invitation To Unveiling – Bentonville. Ark., July 7 1908. To the people of Benton County: The Confederate Monument will be unveiled at Bentonville on the 8th day of August. Major Clifton R. Breckenridge of Fort Smith will deliver the address. We are anxious to have the largest audience on that day that has ever been in town. We want to have a basket dinner on the grounds and want everybody who can do so bring their baskets as we hope for visitors from other counties and want plenty for all. The Daughters of the Confederacy have worked for years to raise money to construct the Monument and want all to see.
We invite everybody without any exception. Let us give one day to honor the dead – one day to peace and unveiling good will.
Jas. H. Berry, Major General Commanding United Confederates of Arkansas

These are believed to be postcards of the unveiling of the Confederate statue. These are the only images we have been able to find of the event.