A man of far-reaching thoughts, vigorous will and splendid ability, Joseph Dow Covey, of Bentonville, was widely known as cashier of the Benton County National Bank, and was likewise conspicuously identified with other business enterprises of this part of Arkansas. A son of John Nap Covey, he was born in Benton County, Arkansas, near Gravette, June 11, 1863. His grandfather, Joseph Covey, who live and died in Tennessee, was pure Dutch stock, the emigrant ancestry from which he was descended having emigrated to this country from Holland, settling  in Maryland.

Born in Bedford County, Tennessee, in 1815, John Nap Covey had but scant educational advantages, but developing in early life a strong taste for reading, he became a man of wide information, keeping in close touch with the leading questions of his day. Choosing the independent occupation of his forefathers, he remained a farmer in Tennessee until 1851, when he located in Bentonville, Arkansas. He subsequently bought land near Gravette, and was there practically engaged in agricultural pursuits during the remainder of his life. He was not a politician in any sense implied by the term, neither a soldier in the Civil War but furnished to the Confederate army two sons and three sons-in-law. His wife, whose maiden name was Martha Holmes Farrar, was born in Tennessee and died in 1880, in Benton County, Arkansas. Nine children were born to them.

Acquiring his early education in the graded and high school, Joseph Dow Covey remained home until twenty-three years of age, assisting in caring for the farm. Going then to Chalk Valley, he was there engaged on a modest scale, in mercantile pursuits for five years. In 1892, yielding to ambitious desires which he had cherished from his youth to become a candidate for public office, he was elected clerk and recorder of Benton County. Two years later he was re-elected to the same position, and served ably until expiration of his term.

Mr. Covey married, June 24, 1886, in Benton County, Arkansas, Mary F. Addington, a daughter of Robert and Martha (Smith) Addington. Her father came to Arkansas with his family from Georgia prior to the Civil War, and died while serving as a soldier in the Confederate Army. Mr. and Mrs. Covey were the parents of four children.

Retiring then to private life, Mr. Covey was made cashier of the Benton County Bank, then a state bank, and has continued his connection with the institution ever since. He is very active and influential in the management of the concern, and to him is due much of its popularity and success as a financial institution.  In 1906, the bank converted into Benton County National Bank, with a capital of sixty thousand dollars, and its surplus then amounted to two-thirds of its capital. It had a distinguished corps of officers, men of ability and worth, R. A. Pickens of Pea Ridge, being president; J. D. Bryan and C. R. Craig, vice-presidents; while its directorate was composed of some of the most substantial men in the Bentonville vicinity. Besides being one of the directors of the Bank of Centerton, Arkansas, he was one of the directors of the Benton County Lumber Company.  Deeply interested in everything concerning banking, Mr. Covey was made a member of the Executive Council of the Arkansas Bankers’ Association, and was a member of the committee of seven chosen from that body to meet with a committee of the state Legislature to discuss banking matters and to devise better laws upon the subject of banking in the state.

Mr. Covey was brought up in the Democratic fold, to which he has ever been loyal, and although not active in politics in his later years, he maintained an extraordinary enthusiasm for his native state and county, one of his life's purposes being that of promoting the welfare of both by securing a new and vigorous citizenship, good laws, a public interest in education and a new and modern social condition in keeping with the best scientific and psychological theories of advanced thinkers. He was one of the chief promoters of the enterprise which resulted in the erection of the beautiful brick and granite structure in which the Benton County National Bank was housed. It was built in 1908, at a cost of twenty-five thousand dollars, and with its artistic designing and its beautiful and expensive interior finishing, it is a credit and an ornament to the town ​and a monument to its founders. It was also through the efforts of Mr. Covey that the Massey Hotel was erected in Bentonville.

Fraternally, Mr. Covey took all degrees in Masonry that he can ask for. He was a member of the Albert Pike Consistory, Little Rock, Arkansas; Al Amin Temple, Mystic Shrine, at Little Rock; and was a member of Bethany Commandery, No. 16 K.T., of Bentonville and grand senior warden of the Grand Commandery of Arkansas, Knights Templar. He was also a member of the Knights of Pythias and of the Independent Order of Odd Fellows. Both Mr. and Mrs. Covey were members of the Methodist Church, South.

​He passed away June 2, 1933 and is buried in Rosewood Memorial Park in Little Rock. 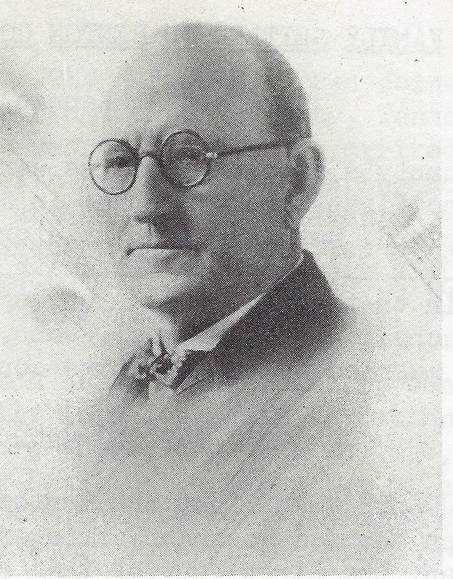